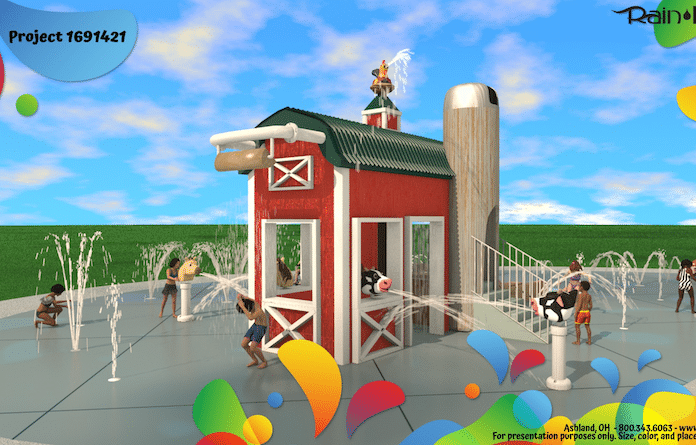 Following a recent Waterloo Park Board meeting and the previous deadline to accept a project bid already passed, it’s not clear if plans for a splash pad in Zimmer Park are going to proceed.

The splash pad was the primary topic of discussion at the park board’s Nov. 9 meeting, with Waterloo Park District President Shelby Mathes expressing uncertainty about the project given the deadline to accept the bids.

“The contractors have called me and asked me what I thought was going to happen, and I said ‘Well, I don’t think we’re gonna be able to do it because I don’t think the money’s going to be there because they’re wanting to get jobs scheduled for next spring,’” Mathes said. “So I said, ‘We don’t have the money, and I don’t have nothing definite.’”

Following the meeting, Mathes said an extension on the bids from Litteken Construction of Breese and Fitzgibbons Contracting of Waterloo had been agreed upon with a Dec. 9 deadline.

Mathes also introduced the possibility of pushing the splash pad project into the future, finding a place to store the already purchased equipment for some time in order to solicit additional funding while also waiting to see if the total price of the project could drop.

According to Mathes, the park board’s health permit for the project is good until March 11, 2024, by which point some physical progress on the project would need to be done in order to keep the permit.

The cost of refunding the already purchased splash pad equipment was discussed, though there was a general hesitancy among the park district commissioners present to abandon the project at this point given the work already put toward it as well as the money spent on designing the splash pad.

It was ultimately decided the subject would be tabled for the next meeting set for Dec. 14.

Park board commissioner Michael Nolte was tasked with seeking a possible extension for the Open Space Lands Acquisition and Development Grant from the Illinois Department of Natural Resources, which will expire June 2023 unless progress is made on the project.

As previously reported, the total cost of the splash pad stands at $1.8 million per most recent low bid from Fitzgibbons Contracting plus money already spent on designing and equipment.

This is a substantial increase from the original estimate of $801,000 back when planning started in 2019.

At a previous finance committee meeting with Mathes and members of the Waterloo City Council present, the committee recommended the city provide the park district with $200,000 from Waterloo’s video gambling revenues so long as the district fill the remaining deficit for this project from another source.

The most likely source has appeared to be the William Zimmer Foundation, which Mathes has previously said expressed a willingness to assist with splash pad funding. That plan encountered a roadblock when the foundation realized it would be unable to provide such funding to a taxing body several months ago.

At the city finance committee meeting and subsequent October park board meeting, Waterloo Citizens for a Pool President Amy Grandcolas expressed her organization’s willingness to accept the donation from the Zimmer Foundation and pass it along to the park district.

At that meeting, Grandcolas expressed hope that members of the park board, WCP and Zimmer Foundation could meet to discuss the situation, but no such meeting has taken place.

Recently, Mathes expressed the possibility the park board would not be working with WCP to accept Zimmer Foundation funds.

Mathes said he is currently waiting for a “Friends of the Park” 501(c)(3) to be established before he reaches out to the Zimmer Foundation. Mathes said he’s not sure if 501(c)(3) certification would be acquired in time for project deadlines, nor is he certain who exactly would manage this organization.

These points have not been discussed at any recent public park board meetings.

Mathes said – and park district attorney Mary Buettner elaborated  – that they are concerned about possible accusations of bribery that might come as the park board works with WCP.

These concerns, too, have not currently been expressed at a park board meeting.

Grandcolas responded to these concerns, noting WCP has not made any specific requests or demands of the park board in exchange for assistance in the splash pad project.

Grandcolas further said WCP has made efforts to work with the park district for some time and the splash pad’s development would naturally benefit the possibility of a community pool as infrastructure for the splash pad – such as the bath house – could also be used for a pool.

“Waterloo Citizens for a Pool has long been attempting to work with and collaborate with the park district with the goal of giving the residents of Waterloo an opportunity to vote on this issue again,” Grandcolas said. “Our gesture of offering to help was purely one of good will because our plans were based off of that splash pad happening and wanting to keep everybody’s plans moving forward and finding a way for these groups to work together as many other communities have done to see these types of projects come to fruition.”

Waterloo Park District Board Commissioner Gina Pfund, previously a member of WCP, also expressed her hope to see collaboration between the two organizations.

Pfund added that, should the Zimmer Foundation be willing and able to do the pass-through of funds, members of the park board would all have to come together and make a decision.

“If it comes to fruition, if it would work with the Zimmer grant that they could make a donation, it is a conversation that the park board, with all the members present, needs to have together,” Pfund said.