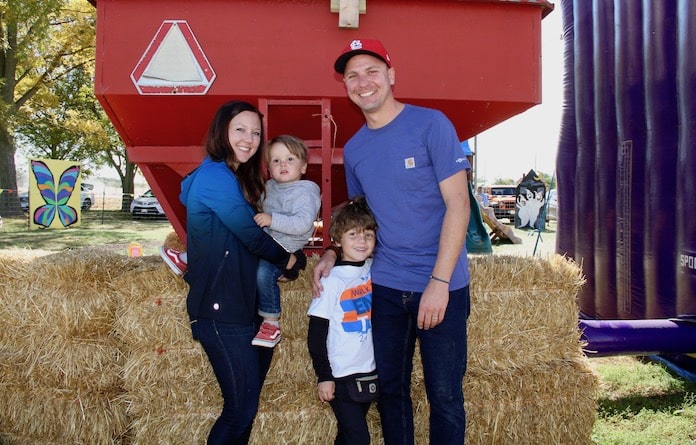 Stuckmeyer’s Plants & Produce recently hosted a fundraiser with the goal of helping a local family afford a diabetic alert dog for their two young boys.

Jenny and Jacob Childerson have been managing their boys’ condition for several years now.

Type 1 diabetes is a chronic condition which prevents the pancreas from producing insulin for the body.

Wilbur was also diagnosed with diabetic ketoacidosis, a complication most often occurring in those living with type 1 diabetes that causes the body to produce excess blood acids due to the lack of insulin.

Jenny said managing the blood sugar and glucose for two young boys with small bodies very sensitive to their condition has been difficult at times.

“Even with wonderful advances in technology, the disease is just terribly unpredictable, especially in little bodies that are really sensitive to insulin and really sensitive to the foods that they eat, drastic changes in blood sugar can happen very unexpectedly and be very dangerous,” Jenny said.

While both boys have insulin pumps and glucose monitors, keeping both of them from experiencing either extreme blood sugar highs or lows, as she described, still requires “24/7 vigilant monitoring.”

“Having two children with diabetes is very, very challenging,” Childerson said. “It means a lot of sleepless nights for my husband and I. It means very very few childcare options. It means having to be extra vigilant in sick season because diabetes doesn’t play nice with other illnesses. And so while we felt like we had a handle on one, having two children really kind of knocked the wind out of us.”

Facing these challenges, the Childersons recently began thinking about getting a diabetic alert dog.

According to Jenny, this type of dog is a highly trained service animal able to detect changes in blood sugar oftentimes even more quickly and reliably than a machine.

Jenny said service dogs like this can often cost around $25,000 depending on their training and where they are purchased.

Despite the medical importance of such an animal, Jenny said the family’s insurance wouldn’t help pay for a service dog.

“Our insurance would not cover any portion for a diabetic alert dog, and oftentimes insurance doesn’t even cover all of the technology that we really rely on as well,” Jenny said. “That’s just one of the realities of living with diabetes.”

While the Childersons were thus at a loss to come up with necessary funds on their own, Jenny said they were able to rely on some “wonderful friends in the community.”

Jenny said they’ve become friends with their neighbors, the Stuckmeyer-Vincents, due to the friendship between their daughter Lola and Wilbur.

Katie Stuckmeyer had already become quite familiar with the Childersons’ struggles with type 1 diabetes, recognizing just how vigilant they have to be and how much care they have to take over their boys.

Upon hearing about the family’s intent to try and get a dog to help take care of their young boys, Katie said she was eager to help.

“I just went to my initial thought of Wilbur, my daughter’s best friend, their oldest, that it would be so nice if we could help them,” Katie said. “What could we do for them and how could we make things a little simpler for them?”

The result was a fundraiser held at the Stuckmeyer family farm.

Jenny and Katie said the event featured a raffle with over 150 donated items, pumpkin paintings and food including a bake sale as well as chili and hot dogs.

Along with some help from the Monroe County House of Neighborly Service, Katie said the event was a big success.

“It was a beautiful day, and we had so many people that are our friends, our family, our customers,” Katie said. “All in all, it was a successful day. We exceeded our goal.”

Jenny emphasized her gratitude to the community for coming out to the event and helping the family.

She added that while diabetic alert dogs can take around 18 months to train, the recent fundraiser won’t necessarily lead to instant gratification but it has led to something to look forward to.

“We are just so grateful to the community for making this happen,” Jenny said. “We couldn’t have done it on our own.”