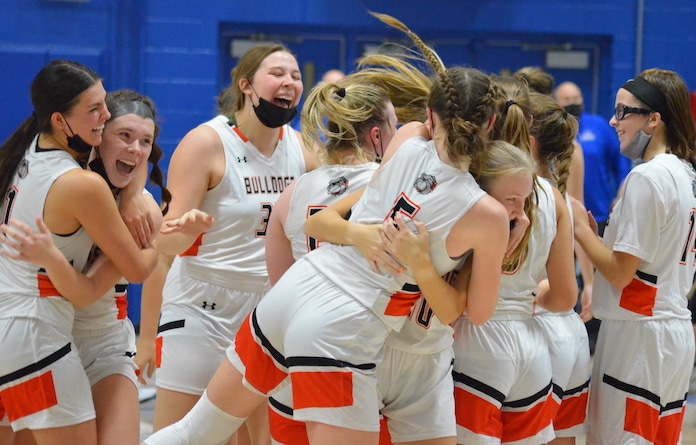 Waterloo is off to an impressive start to the girls basketball season after winning the Columbia Tip-Off Classic.

The Bulldogs downed Father McGivney, Triad and Marquette to take the tourney title.

In Saturday’s final against Marquette, Waterloo trailed 9-1 to start the game but rallied to tie it at 9-9 after one quarter.

Despite playing much of the first half without leading scorer Norah Gum due to foul trouble, the Bulldogs took a 19-18 lead into halftime.

Waterloo went on a 7-0 run to start the third quarter, capped off by a three-pointer by Sam Lindhorst to make it 26-18.

The Bulldogs led 37-27 after three quarters, but Marquette got within six points at 40-34 with just more than five minutes remaining in the contest.

Waterloo went on another run, this one making the score 48-34 at the 3:30 mark and essentially putting the game out of reach.

Gum led in scoring with 13 points even though she sat much of the game on the bench. Kristin Smith added 11 points, including 7-of-8 shooting from the free-throw line.

Waterloo opened tourney play with a 62-30 win over Father McGivney last Tuesday. The Bulldogs led 19-5 after the first quarter.

On Thursday, Waterloo advanced to the final with a 44-28 win over Triad. Gum turned in a monster game with 24 points, 14 rebounds and seven steals. Liv Coulson pulled down 11 rebounds.

The Eagles opened their 11th annual tournament with a 47-26 victory last Monday over Greenville. Columbia led 22-16 at halftime before pulling away in the second half.

Karsen Jany, a junior guard, led the Eagles with 16 points – including a trio of three-pointers – and five rebounds.

Greenville shot under 17 percent from the floor as a team in the loss.

Columbia followed up the win with a 64-28 loss to Marquette last Wednesday. The Eagles trailed 38-18 at halftime.

The Eagles closed out their tourney play with a 46-41 loss to Triad in the third place game on Saturday.