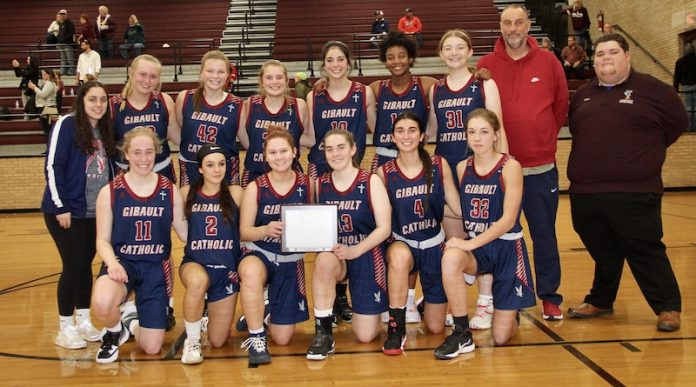 The Waterloo and Gibault girls basketball teams started their season with some hardware for the school trophy case.

Waterloo won three games in the Columbia Tip-Off Classic – including a narrow victory over the tournament host – to take the first place plaque.

Waterloo senior standout Norah Gum scored her 1,000th career point in style last Wednesday night at rival Columbia. She scored 29 points on the night and grabbed 15 rebounds in a 49-46 win for the Bulldogs.

Her 1,000th point came on a late free throw to tie the game. Her next free throw won the game.

Waterloo led 25-16 over the Eagles at halftime, but Columbia battled back late.

Karsen Jany led the Eagles with 20 points and 10 rebounds.

On Saturday, Waterloo topped Althoff to win the tourney, 51-36. The Bulldogs were tied 28-28 with Althoff late in the third quarter of the tourney final before going on a 23-8 run to post a end the game.

Lindhorst’s first three came at the start of the second quarter with Waterloo leading 11-9. Her second came with 3:30 remaining in the first half when Waterloo was up 18-16. Her final three-pointer put the nail in the coffin, giving the Bulldogs a 45-30 edge with five minutes left in the contest.

Waterloo (3-0) takes on Mater Dei in the Metro East Lutheran Shootout at 1 p.m. Saturday, then hosts Highland on Monday and Red Bud on Tuesday.

Columbia (1-2) dropped a 49-32 contest to Father McGivney on Saturday in the third place game of its tournament. The Eagles were outscored 16-3 in the fourth quarter.

Jany and Ava Langhans each scored 11 points to lead Columbia, which hosted Jerseyville on Tuesday night.

On Saturday, Gibault trailed 12-11 after one quarter but went on a 20-7 run in the second quarter during a 44-35 victory over Wood River for the tourney title.

Small led the Hawks in the championship game with 15 points, 12 rebounds, five steals and six blocks.

Also at the Cat Classic, Valmeyer went 1-2 – concluding tourney play with a 42-27 win Saturday over Madison despite committing 33 turnovers.

On Friday, Valmeyer won 29-28 at Lebanon in a regular season game. Miller again led the way with 11 points and eight rebounds.

In Thursday’s victory, T’yonna Burris led the Tigers with 19 points.