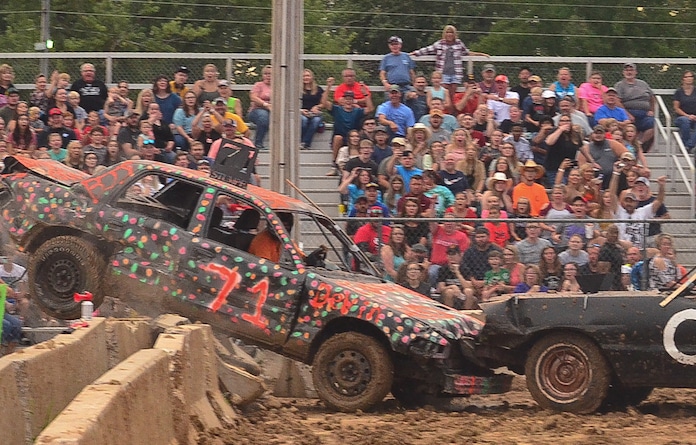 Another capacity crowd filled the grandstands of the main arena Friday night for the annual Monroe County Fair Demo Derby in Waterloo.

Even with an additional 1,000 seats this year, the stands were packed in the perfect late July evening weather.

This year’s derby began with a bang, as the black OU1 car of Greenville’s Levi Trentman drove Brady Stumpf of Columbia’s spotted 71 car into the corner and over the concrete wall to knock out Stumpf just more than a minute into the 18-car full-size bone stock event.

This event came down to Glenn Lutman of Ellis Grove – who won the truck derby late Wednesday night – and derby veterans Brad Yearian of Fults and Pat Seymour of Waterloo. Lutman’s engine outlasted the others to take the top trophy.

The next event was the mini-car bone stock class, which featured 21 entries. In the end, first-time derby driver Derek Kempen of Valmeyer in his black D14 car outlasted the yellow 95 car of Freeburg’s Ben Scanlan to win first place. Nate Huelsmann of Waterloo won the Mad Dog Award in his 88 car.

“That was awesome,” Kempen said after winning in his first derby try. “I’m definitely doing this again.”

The mini-weld class featured 23 cars, most of which flashed some speed on this muddy main arena track.

The large field was eventually whittled down to the 34e car driven by TJ Ervin of Columbia, the 01 car driven by Kory Johnson of Waterloo and the 21 car driven by Scott Nanney, among others. Ervin placed first. Nanney won the Mad Dog Award.

The final event of the night was a battle of heavyweights in the full-size semi stock class. It featured 18 cars and lasted about an hour before the 46 car of Waterloo’s Tony Ahrens emerged victorious over the likes of local derby vets Jake Riebeling, Pat Seymour and Dylan Allscheid.

For more photos from this year’s demo derby, click here.