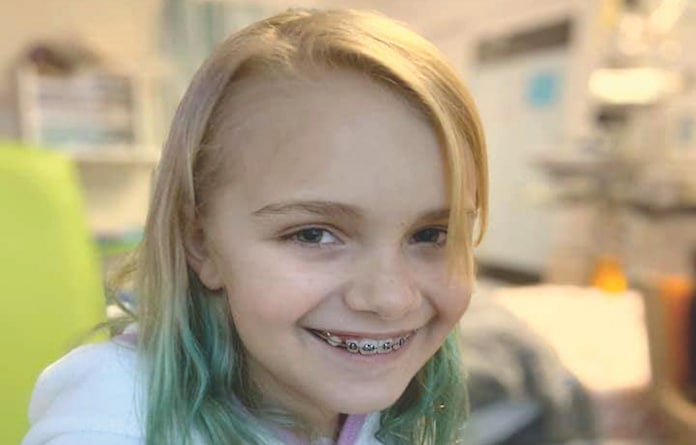 For about 4.5 years, Elsa Wiemerslage has been battling a rare form of pediatric cancer called acute myeloid leukemia.

And for almost that entire time, Waterloo has been helping Wiemerslage and her family through myriad fundraisers and events.

“It’s been almost five years that Elsa’s been fighting this disease, and it’s just amazing to see that our community is still just behind her in every step of the way and showing their love through fundraisers,” Adrienne Wiemerslage, Elsa’s mother, said.

Elsa was diagnosed with AML in October 2015 and has beaten it twice already with the aid of such drastic treatments as a bone marrow transplant and donor lymphocyte infusion.

Last summer, the Wiemerslages knew Elsa’s leukemia was back and was growing, so they began monitoring it.

Elsa was able to continue living her normal life until her condition became bad enough that she needed to be hospitalized in January.

“She’d been in school, she’d been playing sports, she’d been enjoying her life, but it just got to the point where the cells were multiplying so rapidly that she had to be hospitalized and we had to start treatment,” Adrienne recalled.

This time, Elsa is in a clinical trial called the Natural Killer Cell Trial with Washington University.

In this trial, which started with five days of chemotherapy, Elsa’s brother Eli donated some of his natural killer cells last week via a central line in his neck.

Those cells, which are a type of white blood cells that can kill tumor cells or cells infected with a virus, were then taken to a lab to be strengthened before Elsa received them Feb. 11.

“I say it’s natural killer cells on steroids,” Adrienne explained. “We all have these cells naturally in our body, but these cells are pumped up on extra stuff so they go after leukemia.”

Eli’s cells needed to be used because he had previously donated bone marrow to his sister in 2016.

“The goal is to go after any leftover leukemia because with leukemia and all the treatments that she has done previously, there’s still some underlying leukemia hanging out,” Adrienne said. “And it usually just waits, and waits and waits until the opportune time, then it starts to sneak up. That’s what we saw this past fall into the winter.”

Now, there will be monitoring and procedures with lab work done each week to ensure the natural killer cells are doing well.

To help in this process, the community is once again lending a hand.

Residents throughout town have installed orange light bulbs in support of Elsa.

Ali’s Army STL, a nonprofit organization, is hosting a golf tournament for Elsa at Triple Lakes Golf Club in Millstadt on May 16. Call 314-686-8468 or email alysarmyltd@gmail.com to learn more.

Another fundraiser currently happening is Crusin’ for Elsa, a pub crawl and motorcycle ride. Registration ends Feb. 26 for the March 21 cruise. Email catrinaldell@gmail.com for more information.

The Waterloo school district, which Elsa is part of and Adrienne teaches in, is also leading the way with several efforts.

The Waterloo High School Transition Program donated $600 to Elsa and her family from its recent Lovapalooza fundraiser.

Additionally, several members of the district’s teaching and administrative team are raising money by collecting donations to shave their heads on March 14.

Those funds can be donated via PayPal or by making a check out to House of Neighborly Service with “Elsa” in the memo line and giving it to those individuals.

Members of the public are also participating in that shaved head challenge, which takes place from 1-5 p.m. at Stubborn German Brewing Company in Waterloo. Donations to those people can be made the same way.

Perhaps the largest upcoming fundraiser is one hosted by Fast Fitness in the Loo and Pound 4 Pound Fitness Center.

That event is a cardio kickboxing workout set for this Saturday from 9-10 a.m. in the WJHS gym.

Fast Fitness in the Loo co-owner Christene Baldwin hosted a similar event last year, and wanted to do it again.

“We tried to come up with a way we could raise money but also celebrate health and wellness because we take it for granted,” Baldwin, who used to work at WJHS, said. “(Thinking about Elsa) just makes you appreciate how lucky we are to run around and jump around.”

It costs $10 per person to attend the workout, which is called Kicking Cancer’s Butt.

Participants should either bring cash or a check payable to HNS with “Elsa” in the memo line. They should also wear workout clothes and bring water.

Baldwin said the event will include music and promised to make people sweat with a variety of fun exercises.

Afterward, Baldwin said she hopes people consider how healthy they are.

“There needs to be some reflection and maybe some gratitude about where we are and why we’re able to do that,” she said.

Finally, monetary donations can also be made to HNS. Visit mocohouseofneighborlyservice.weebly.com for more information.

Adrienne said her family appreciates all the support.

“It really just makes us as parents so grateful to have the community we have because we can focus on her and not worry about paying off the electric bill for that month or whatever,” she said. “It’s just wonderful.”

To stay updated on fundraisers and Elsa’s condition, join the Prayers for Elsa group on Facebook.