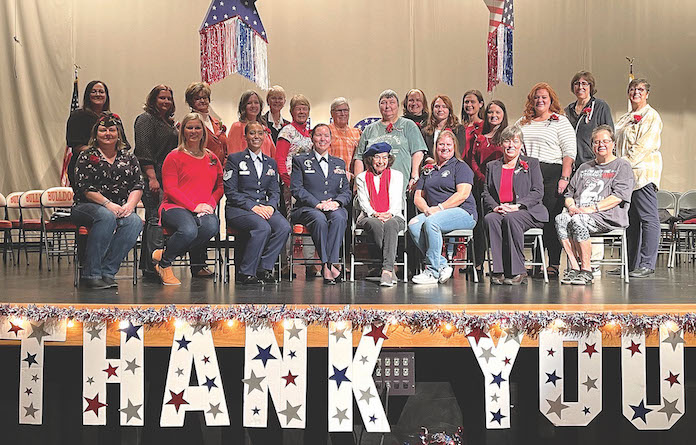 Waterloo and Columbia each held their own Veterans Day ceremonies to recognize the service of the many military members in the community.

Waterloo’s celebrations this year placed a specific focus on women in the military.

Nov. 10, the Thursday evening prior to Veterans Day, saw another annual ceremony in the Waterloo High School auditorium.

On stage was a group of 23 female veterans, each of whom were individually recognized for their military service and awarded a small plaque.

Among these women was World War II veteran Lucy Engbring, for whom the whole auditorium sang to celebrate her 99th birthday that fell on Veterans Day.

The event also featured performances by the WHS and Gibault concert choirs – led by WHS Choral Director Carrie Munsell and Gibault Choral Director Scott Ruppel – who sang the national anthem, “A Tribute to the Armed Services” and “God Bless America.”

WHS Principal Lori Costello spoke to welcome the crowd following the presenting of the colors and a prayer led by Chandra Caraway of Truth Church in Waterloo.

Costello thanked all veterans in attendance for their service, also speaking to her own experiences as someone with several service members in her family.

“I can not only sympathize but I can empathize with the sacrifices it takes to be the family member of someone who serves,” Costello said.

The guest speaker for the event was Lieutenant Colonel Brandy N. McCart, Commander of the 345th Recruiting Squadron at Scott Air Force Base.

McCart described the effort and determination women in the military have had through the country’s history, noting how many women disguised themselves as men to serve in combat roles while still more took on a support role in the Revolutionary War and Civil War.

She also spoke to her own experiences in the military and how the camaraderie that came from her service has made her a better person.

“At the end of the day, we’re all humans, and serving together in that capacity has given me more value to my life, intrinsically, than I think I could have ever achieved on the civilian side,” McCart said. “I really love being a part of the Air Force and that family.”

The event also involved a special commendation to Ryan Brandt and Russel Wolf, who have played “Taps” for the ceremony for many years.

That ceremony also involved the dedication of the female veteran statue, one of several veteran statues recently added to the memorial.

Columbia Mayor Bob Hill spoke at the event, offering his thanks to those veterans in attendance.

“These service members have stood watch in defense of democracy, in defense of life, liberty and the pursuit of happiness, American ideals on which this country was founded,” Hill said.

Serving as guest speaker for the event was Lieutenant Colonel Andrew Aycock, who has served in the Air Force as a nurse in a variety of situations both domestic and abroad.

Aycock is also currently serving on active duty at Scott Air Force Base. He spoke about his experiences in the military, making a special mention of the struggles of families of service members and also describing what it means to be a veteran.

“When you truly define a veteran, what you get is more like ordinary people who took it upon themselves to support and defend their country in every way asked with the potential cost of their own lives,” Aycock said.

Prior to Aycock’s presentation, Auxiliary Unit 581 President Janet Janson spoke, offering a brief history of the American flag in which she described the flag’s meaning and how it grew to be the symbol that it is today.

“The history of the American flag is fascinating. It has survived battles, it has inspired songs and it has evolved in response to the growth of the country for over 200 years,” Janson said.