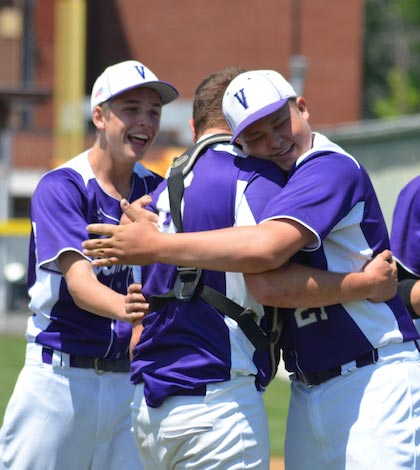 The Valmeyer High School baseball program has been haunted by decades of postseason failures since the glory days of the early 1970s.

But the baseball-hungry community exorcized its demons on Saturday, nipping Metro East Lutheran to win the Class 1A New Athens Regional, 2-1. It was the program’s first regional title since 1971. Valmeyer also won regional titles in 1960 and 1968 and is the home of former major league pitcher and coach Ray “Bud” Rippelmeyer.

“The ghost was hard to kill,” a jubilant Valmeyer head coach Greg Reinhardt told the Republic-Times as his players were hugging and smiling at home plate following the one-run victory.

Senior slugger Mark Nappier led off the bottom of the sixth inning by bashing his 10th home run of the spring, sailing it high and deep over the left field fence at Whitey Herzog Field. His 10 homers rank second in the entire St. Louis area. His 49 RBIs are tops.

“The heroics from Mark, it was wonderful,” Reinhardt said. “He’s done it for us all year.”

Sophomore pitching ace Cole Juelfs kept the Metro East Lutheran hitters at bay all game. He threw a complete game with seven strikeouts to earn his fifth victory of the season.

Easton Wallace smacked an RBI single to tie the game at 1-1 in the third inning. Nappier and Jake Krekel had two hits apiece to pace the Pirates offense.

Valmeyer (21-14-1) advances to the Carlinville Sectional and will take on Nokomis on Wednesday.

The Dupo Tigers ended its season with a 7-1 defeat at the hands of Piasa Southwestern in the Class 2A regional final on Saturday. The Tigers finished 17-9.

Columbia completed its regular season with a doubleheader split on Saturday against Belleville West on senior day.

A six-run fourth inning propelled the Eagles to victory in the second game. Columbia (19-13) will battle Mascoutah in the Class 3A Mascoutah Regional on Thursday.

Waterloo (23-6) lost its second straight game on Friday, falling to Civic Memorial at home, 6-4. Waterloo will face Edwardsville at 5 p.m. Monday to close out the season at GCS Ballpark before playing in the Class 3A Mascoutah Regional.