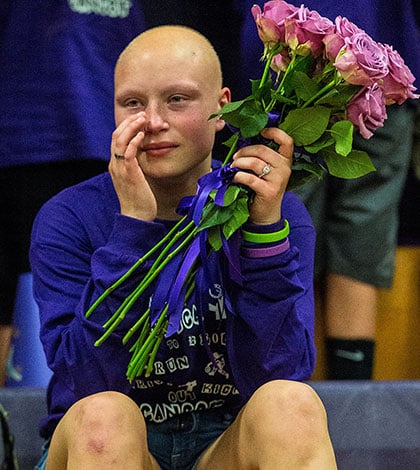 “That was really fun,” Jessica said with a smile. “I’ve never ridden in one.”

After parading through the streets of the village, Jessica, who is battling Hodgkin’s lymphoma, entered the gym where the scheduled volleyball match between Valmeyer and Red Bud took place.

Valmeyer’s “Block, Run, Drive and Kick Out Cancer” event took place last Tuesday in Jessica’s honor, replacing the annual “Volley for the Cure” match the school has been hosting for breast cancer awareness since 2009.

Jessica was diagnosed with Hodgkin’s lymphoma at the end of May.

Jessica, who lives in Maeystown, had gone in for surgery to remove a cyst that had been bothering her since the year before.

Original biopsy results indicated the cyst was benign, so the doctors drained it. When it returned, they operated and found the cancer.

“Once we heard over the summer that Jessica had been diagnosed, the girls, (assistant coach) Karla (Bivins) and I started talking about changing our theme this year,” VHS head volleyball coach Jenny Kohnz said.

Since Jessica is on the VHS cross country team, the volleyball squad invited the other fall sports teams to join in the event.

The golf teams donated baskets for a raffle, as did the cross country team. The soccer team hosted a pizza fundraiser the night of the game. The volleyball team also donated baskets, received donations from across Monroe County and helped set up for the event.

But before all that could take place, Kohnz had to do one thing.

“I first spoke with Jessica to make sure she was comfortable with us doing a special night for her,” Kohnz said. “Jessica was moved to tears when I asked her.”

In addition to the raffle, a 50/50 drawing and proceeds from the sale of 275 custom T-shirts donated by Winning Streak helped raise money for the Hicks family. A faculty volleyball match also raised funds for the cause.

The school does not yet know how much money it raised, but it certainly had an impact on Jessica and her family.

“It was, wow, it was a lot,” Jessica said. “There was a lot of people. I was surprised by how many people were there.”

“I really didn’t expect it to be that big of a turnout or anything,” Lynne Hicks, Jessica’s mother, said. “It was kind of overwhelming. It was an amazing night for everybody to come out and show all their support for us and for Jessica.”

Lynne said the first she saw of the support was during the fire truck ride, which her cousin helped set up.

Once the Hicks family arrived at the VHS gym, they saw it was packed with about 350 people who started chanting Jessica’s name.

“I didn’t expect them to do that,” Jessica said. “I was just overwhelmed.”

Next, the seniors from the VHS volleyball squad read poems to Jessica and each gave her a rose as a song played. That latter gesture is tradition, though they are not usually given to one person.

“I didn’t know they were doing that,” Jessica said as her eyes became a little teary. “I felt a lot of joy because of what they did.”

When that happened, Jessica began crying. Other students did, too, including those on the Red Bud team.

“It was really fun,” she said of watching the game. “They did well in the first set and didn’t do so well after that, but they were there for me the whole time.”

Kohnz said it is that type of support that makes Valmeyer special.

“Just as the community came together in 1993 (after the flood), we came together again to rally around one of our students that is facing cancer,” Kohnz said. “We are a tight-knit community that takes care of our own.  We are called the Village of Valmeyer for a reason, because sometimes it does take a village to heal a child.”

“It meant everything,” Jessica said of the night.

“It was an amazing night,” Lynne agreed. “It’s a big tearjerker. I did quite a bit of crying there.”

“Jessica was looking forward to the volleyball game for weeks,” she added. “It was more than we ever imagined. It was such an amazing night for all of us, and we would like to thank the volleyball team, teachers, all the Valmeyer school staff, students and their families, the Valmeyer Fire Department, the community and anyone else who helped make this night so special for Jessica.”

Lynne said there are currently no other plans for a similar event, though she did offer a way people can help.

“Their prayers and support are great,” she said.