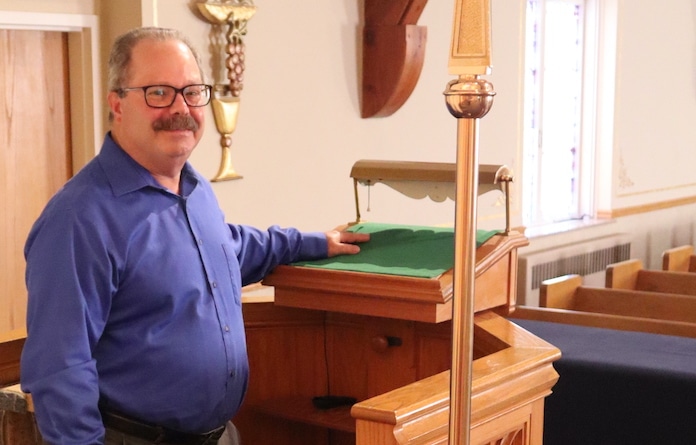 The associate pastor of Immanuel Lutheran Church in Waterloo is stepping away from the position following 26 years of service.

He spoke fondly of his experience at the church and with the members of the congregation.

“It’s been a great experience, and I really love Immanuel, and I love Waterloo. Immanuel has great leaders, we’ve always had a strong staff,” Troup said. “They’re very wonderful people.”

Troup said he is originally from south St. Louis and had grown familiar with Waterloo thanks to work he did for his uncle when he was younger that sent him throughout the area.

It wasn’t a direct move from St. Louis to Waterloo, however. For his education, Troup attended Lutheran prep schools and later graduated from Concordia Seminary in St. Louis in 1984.

He then served as a pastor at parishes in Kansas and Michigan before eventually getting called to consider the position at Immanuel Lutheran.

During his time as a pastor intern in Michigan, Troup also met his wife Cindy during a Bible study. The two soon got married and have since had three children and seven grandchildren, plus another on the way.

Troup said he first decided to become a pastor in high school. Though he didn’t have any specific mentor to push him toward the church and he doubted his ability to serve as a pastor, the departure of his father when he was 10 years old along with the subsequent care from his mother brought him to his faith.

“God took care of us in marvelous ways,” Troup said. “My mother was a very Christian woman, strong Christian woman, so we did very, very well. We never lacked for anything, and so out of gratitude, I decided to become a pastor.”

Troup said he’d seen a lot over his 26 years at Immanuel Lutheran.

Along with overseeing a number of programs at the church as well as a new narthex – of which he is particularly fond of the couches and coffee – Troup completed his Doctor of Ministry degree in 2009.

He recalled the years spent studying for his doctorate as busy, often taking him away from the church. But the congregation was supportive of his work, even assisting him with his thesis when he asked.

“I asked for volunteers to help me with my field research, and they would answer questionnaires and I would interview them,” Troup said. “I had 82 volunteers, so they really supported me fully.”

Demski commented on the departure of his fellow pastor. He noted the role of mentor Troup had filled for him as well as how strange it will be to be overseeing the church by himself.

“It’s been nice to learn from him and to glean from his wisdom of all the years in ministry and his experiences here at Immanuel,” Demski said. “It’s gonna be different to have a Sunday morning where I just know that we’re not going to bump into each other.”

Cindy Troup also spoke on her husband’s retirement, noting they are looking forward to having more free time to spend as they please.

“I think we’re both really looking forward to that having a little more freedom and flexibility in our schedule,” Cindy said. “To be able to spend more time together, to be able to go see our grandkids.”

Troup said he hopes to have left a positive legacy at Immanuel Lutheran.

A shorter man – Troup thanked one member of the congregation for building him a movable step for the pulpit – he hopes that his stature and passion for the church have left a strong impact.

“I hope to be known as the short pastor who shared the full council of God and pointed people to Jesus,” Troup said. “If they remember me as that short guy who preached the word and pointed to Jesus, I’ll be good.”

Troup will officially be stepping down on Oct. 1. A celebration of his time at the parish will be held Sept. 24-25. Visit immanuelwaterloo.org for more information.