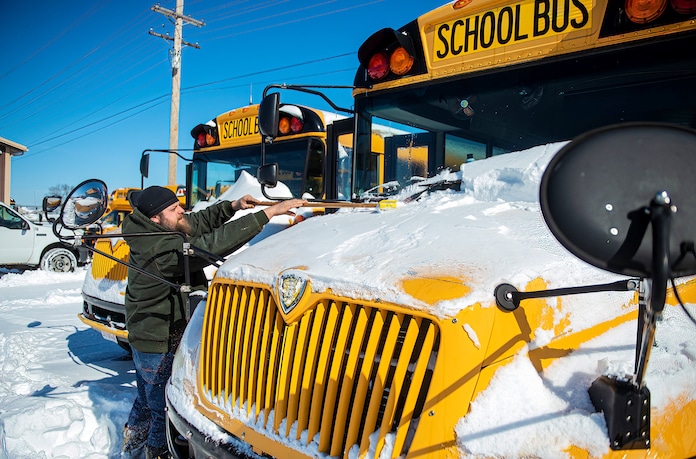 Last week’s snow and freezing rain led some Monroe County students to have essentially a five-day weekend, while others were learning from the comfort of their homes.

Both Waterloo and Columbia school districts had called “snow days,” or emergency days that will be made up at the end of the year, on Wednesday, Thursday and Friday.

These plans, should they be approved, allow school districts to host e-learning in emergency events such as inclement weather, effectively cutting down on the number of “emergency days” used at the end of the school year.

A 2019 state statute is credited with popularizing the e-learning plan.

“We just have not yet had a chance to develop the plan,” Grode said, explaining the process of creating a plan involves bringing it before the school board and hosting a hearing so the public can voice input, and with much of the district’s focus being on how to return safely to in-person learning this year, developing an e-learning plan was not feasible.

Charron explained that last academic year did not require an e-learning plan, as many schools were already learning virtually the large majority of the time due to the COVID pandemic. Now, schools need to have an e-learning plan to learn virtually for any non-pandemic-related reason.

“With all the remote learning going on last year, the state had indicated that schools did not have to have an e-learning plan in place and they could do an e-learning day (in lieu of a snow day) if they needed to,” Charron said. “Many of us thought that was extended for the duration of the pandemic, but it was not.”

In order to have an e-learning plan, districts must guarantee every student has access to all materials and infrastructure necessary to learn virtually, Charron said. He explained that during long periods of remote instruction because of the pandemic, the district secured T-Mobile hotspots to provide internet access to students who needed it.

“It would be very difficult to get all of these mobile devices back and get them distributed just for an occasional snow day here or there,” Charron said. “It just does not make sense.”

Immaculate Conception School Principal Dave Gregson explained instead of submitting its e-learning plan to the state, the Catholic school’s plan is approved by the Diocese of Belleville.

Stipulations on its e-learning plan is also governed by the Diocese.

Having its plan approved, the school decided its students would learn virtually Wednesday and Thursday.

“We wanted to make sure that the kids still had a chance to maintain the curriculum. If they have off too many days in a row, then you’re almost starting over when you get back to school. So the main purpose was to continue on with the curriculum from what they were working on before the inclement weather occurred and they couldn’t get into the building,” Gregson said of the decision, adding both students and staff had grown accustomed to virtual learning since the pandemic started and so the temporary transition due to incitement weather was not difficult.

Gregson also explained an advantage to these e-learning days is families can better plan vacations as they do not need to be made up at the end of the academic year.

Because the school outlined it would not have more than two e-learning days in a row, ICS students saw a true “snow day” Friday.

“As a school, we decided that we would only do it two days in a row, and if we have a third day then we would just consider it a snow day, the reason being it’s hard to continue a curriculum when you’re not in the classroom for three days and it’s also hard to teach something new virtually or through e-learning,” Gregson explained.

Unlike past decisions to call off school, neither Grode nor Charron said they received complaints about canceling school last week.

Charron said he believed being able to provide families with advanced notice, coupled with the seriousness of the winter weather, contributed to the positive reaction.

“With this weather event being predicted and widespread, the National Weather Service did start communicating with superintendents at the beginning of the week, and there were webinars each day at 3 p.m. for them to just report to us and give us opportunities to ask questions. Through that process, we were able to learn that the National Weather Service was very confident about this weather system coming in,” he said, explaining this allowed the district to provide ample notice of schools’ closures.

Unlike Charron and Grode, Gregson said he received mixed reactions to ICS’ decision.

“Some parents are really excited about it, some parents have opposed it, but hopefully I was able to convince them that we should give it a try,” Gregson said. “We will re-evaluate it at the end of the school year to see how effective it was and to see if it would be beneficial for us to use next year.”

Yet, he said teachers were “all for” e-learning, as they said it minimized disruption to the curriculum.

The future of snow days is being called into question across the nation as the pandemic has made learning virtually more commonplace. As Gregson noted, many area schools opted for e-learning during this recent snowstorm, which he said caused him to think snow days may become a thing of the past.

When asked if he believes there will be a time when true snow days will become obsolete, Charron said, “Not while I’m superintendent.”

“From my perspective, snow days are fun and memorable opportunities for children. I don’t want to take that away, and a regular day of attendance for education is much more beneficial for students than a day of remote learning,” Charron said.

It seems much of the community shares the former sentiment.

“I am a parent of four. I love that they actually have a snow day,” John Briley, a Columbia parent, wrote on Facebook. “I think it’s something for them to hope for and gives them a surprise break from learning.”

Others, like Will Pitts, also voiced love for the nostalgia these special days bring.

“As a Columbia teacher I think the kids and staff really liked an old-fashioned show day,” Pitts wrote on Facebook. “Remote learning is OK if it has to be done for a pandemic; a snow day that gets made up in May will not be the end of the world. Let’s hold onto the past a little longer.”