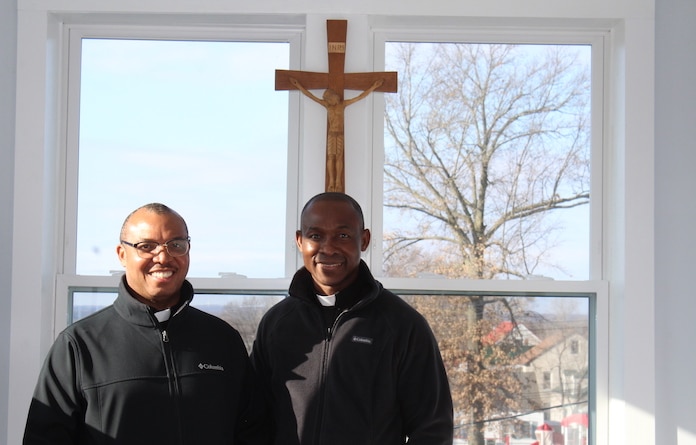 Thanks to a dedicated group of volunteers, the priests at Ss. Peter & Paul Catholic Church in Waterloo will soon have a private chapel and an updated living space.

When the priests expressed a need for a chapel in the rectory, the Knights of Columbus were quick to donate toward converting an old, crumbling storage space overlooking the back playground into a private chapel.

“The priests have wanted to have their own chapel so that they won’t have to go over to church and say Mass,” Ron Hagenow, Knights of Columbus member and parishioner, said. “If they’re busy, they can just go right down the hallway and say Mass right there.”

However, as Knights of Columbus member and parishioner Ron Hagenow said, it soon became apparent the Knights could help in other ways, too.

“The priests wanted a chapel, and the Knights of Columbus heard about it and we said we would donate money to have somebody come in and develop the space,” Hagenow said, explaining it was in poor condition and being used for storage. “Then (member and parishioner) Steve Goessling said, ‘Well I can do this stuff, and we could probably do it cheaper ourselves.’ So he called me and a couple of other guys up and we started working up there.”

Through a campus campaign, the parish was able to replace the rectory’s windows and fix the roofing. Once this was complete, the door was opened for the Knights to make significant headway.

Goessling, who worked in education before retiring but has done a myriad of home improvement projects, said the project fit in perfectly with the organization’s mission.

“The Knights of Columbus are supposed to be a service organization that provides things to the parish, so we decided it was a good project. We saved the parish some money and it was a good way to get our members involved,” Goessling said.

The chapel is now nearly complete with new floors and fixed and painted walls. All it is missing is an altar, which Goessling is making himself out of all locally-sourced oak.

“We are so excited that we have a place where we can come for quiet time to pray, to reflect, at the chapel,” Father Evaristus Akabueze said.

Yet, the chapel is not the only part of the rectory the volunteers have been working on. Hagenow and Goessling said as they continued working on the chapel, other areas in need of some TLC caught their eye.

“In addition to the chapel, we’ve painted all the rooms on the first and second floors, we have moved things around and gotten rid of stuff,” Hagenow said. “What started as a simple project has ended up being months long, and probably (will take) several more months.”

The crew plans on redoing the kitchen – and installing all new appliances – carpeting, other flooring, HVAC work and more.

“This building is really like any of our houses – it’s lived in, so after 30 years – that’s how long it’s been since it has been updated last – it needs to be refreshed. That’s what we’re trying to do to the inside now to give them a nice place to live again,” Goessling said.

Knowing the Knights are part of the reason why the historical building, built in 1896, is still standing makes the ever-expanding project even more rewarding. The volunteers have done all they can to preserve the original detailing, such as ornate wood paneling on the stairwells.

“When the conversation started there were a lot of thoughts thrown out there on whether we should tear down the rectory and build a new one … those were some things people suggested,” Father Linus Umoren said. “But, some said, ‘You know what, this building is very beautiful, it’s traditional, it’s historical, we can restore it.’ Then when it was brought to the parishioners for the first time, they got the money – almost 100 and above percent – within a few months for the campus project. So, that was very exciting!”