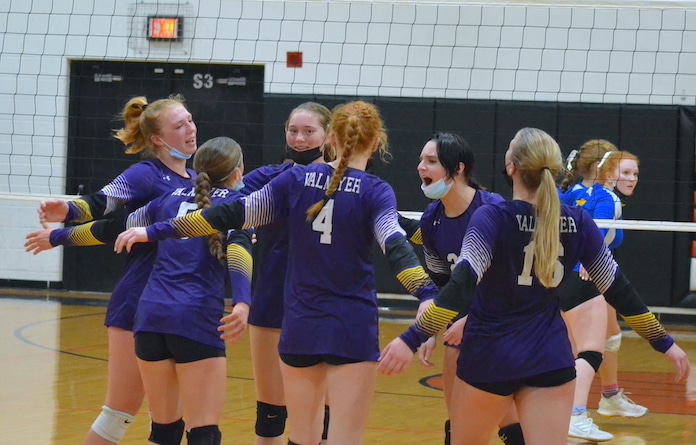 But have no fear, Pirates fans. The future looks bright.

In the rematch, the Pirates made 25 errors in the form of missed serves, shanked balls and hitting and blocking miscues.

“When you lose by five points in the first set and eight in the second, 25 errors is way too many,” Valmeyer head coach Karla Bivins said.

Brooke Miller, a sophomore, led the Pirates with seven kills. Jayna Krekel, a junior, had 11 assists.

The Pirates finished the season at 27-12, including a perfect Kaskaskia Division showing and a regional crown. The best part is that all players from this year’s squad will return in 2022.

“We are a young team. I was starting two juniors and four sophomores,” Bivins said.

After sophomore Hannah Gideon broke her thumb in mid-October, freshmen Ava Reeves and Violet Krekel were forced to fill in.

“Our goals for the season were simple. We wanted to improve on each tournament. We wanted to win conference and hit 25 wins. We wanted to get as far in the postseason as possible,” Bivins said. “As a team, we felt we could have and should have played better, harder, faster and louder. So we are already looking at our top goal for next year… making it beyond sectionals.”

Bivins praised Krekel and Markee Voelker, another junior, as leaders on and off the court.

“They are true captains of the team,” the coach said. “Markee is a big communicator and can read the court very well. She keeps balls in play and is a top defender and hitter.”

“Jayna is a little more quiet and reserved on the court than I like my setter to be, but she sure gets the job done,” Bivins said. “She leads the team and the conference in assists and does a great job as a rightside blocker and hitter.”

Krekel finished with 498 assists on the season.

“Mia is an outside hitter who leads the team in digs,” Bivins said. “Mia is a very precise passer. She works hard and never gives up. She is short for an outside hitter but has great jumping ability and is a strong athlete.”

Kierstin and Brooke are middle hitters who also take turns setting from the back row, Bivins said.

“Both are quick and versatile. Both have similar skills and roles on the team,” Bivins assessed. “Both do a little passing, some setting, but lots of hitting and blocking.”

Gideon just recently had a cast removed and was only able to play sparingly in the sectional final.

“It was unfortunate her injury happened when it did, because Hannah was at the top of her game as a blocker,” Bivins said.

Kate Lueke and Courtney Schilling are other sophomores who played this season and will be counted on going forward.

“The experience all of the girls gained from this season will help out over the course of the next few years,” Bivins said.