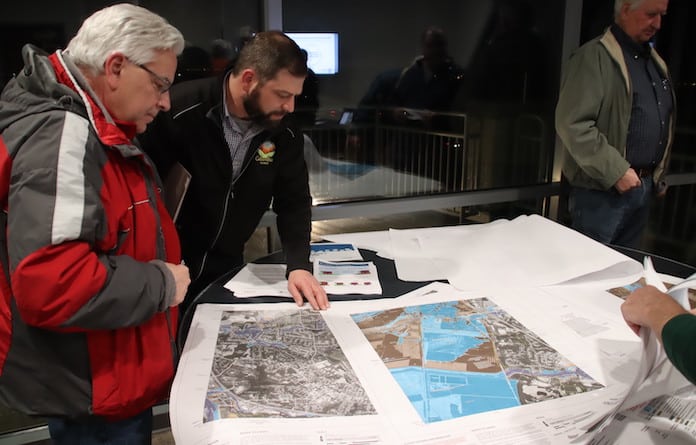 The only constant in life is change, and Columbia residents came out in force last Tuesday to see if they had any change in their futures.

Representatives of the Federal Emergency Management Agency, U.S. Army Corps of Engineers and local officials were on hand at 11 South in Columbia to discuss FEMA’s preliminary flood maps and the impact of the proposed changes.

The most impactful changes for some Columbia residents are found near the Carr Creek and Palmer Creek watersheds along Valmeyer Road and Quarry Road, respectively.

A number of Columbia homeowners came to the open house to discover if the new flood areas would require changes to their home insurance coverage.

While many curious citizens found the proposed changes would not affect their properties, the ones who found their homes in a flood area in the new maps are now faced with a possible increase in cost of ownership.

Those whose homes are now in a flood zone may be required to enroll in a flood insurance program.

FEMA officials explained how the agency determined changes in the flood insurance maps in the area.

“Regarding changes to the maps for Palmer and Carr Creek: The methodology used to map flood risk for Palmer Creek downstream of Route 3 combines results of three modeled scenarios, as the existing overbank berms do not meet the criteria for levee design and operations and maintenance criteria under National Flood Insurance Program regulations,” FEMA representatives wrote in a statement for the Republic-Times.

The process to determine coverage involved three models. Two models anticipated flood areas with the left or right embankment of the waterways removed. The other model showed possible flooding with both embankments intact.

“The Preliminary Flood Insurance Rate Map is based on the highest flood stage for all scenarios.  For Carr Creek, the newly mapped floodplain is based on a redelineation of the effective elevations on 2012 data,” FEMA said.

The elevation data is based on a Light Detection and Ranging collection tool which uses GPS and laser pulse measurements that “allow scientists and mapping professionals to examine both natural and man-made environments with accuracy, precision and flexibility,” according to the National Oceanic and Atmospheric Administration.

“While significant community review of the maps has already taken place, community stakeholders can identify any concerns or questions about the information provided and participate in the 90-day appeal and comment period before the maps become final,” which is  expected to begin this spring or summer.

An appeal must include technical information, such as hydraulic or hydrologic data, to support the claim.

Once all appeals and comments are resolved, FEMA will notify communities of the effective date of the final flood maps.

The other significant change in the map involves an area slated for development in the near future by a proposed Dupo interchange on I-255 at Imbs Station Road in the northernmost section of Monroe County.

While low-risk zones in the area are mostly unchanged, there are is a new “high risk” zone “immediately adjacent to the western edge of the northbound/northeast bound section of I-255,” according to FEMA officials.

The new high-risk zone may create problems for developers who wish to build in the area to the west of the proposed I-255 interchange.

Individuals who could not attend the open house can view their properties on the updated maps at msc.fema.gov/fmcv or call the FEMA Mapping and Insurance Exchange at 877-336-2627.

Learn more about the mapping process at fema.gov/flood-maps.