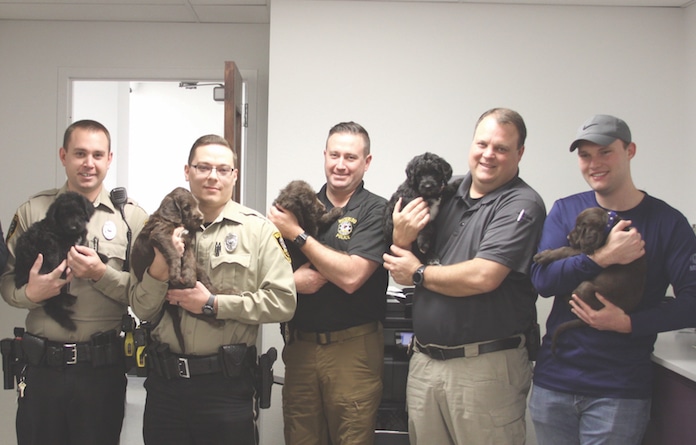 A local woman brought her 7-week-old labradoodle puppies into the Waterloo Police Department on Friday afternoon, but it was more than a social  call.

The dogs are known as “Potter’s Puppies” in honor of WPD officer Andrew Potter. Potter stopped Mary McNeight for speeding on Route 3 in Waterloo, but then escorted her to Riverstone Animal Hospital when he noticed her pregnant dog was in labor distress.

“I’d never dealt with anything  like that,” Potter said of the unique situation, “but the dog definitely looked like it was in labor.”

The puppies in that particular litter are special for another reason. They are being trained as medical alert service animals.

McNeight, a nationally recognized and award-winning dog trainer, has over a decade of medical alert training. She is head trainer for Service Dog Academy in St. Louis.

One of her diabetic service dogs, Imogene Bakker, was the dog in labor during the traffic stop.

“She was in labor too long and I had to drive to Riverstone for emergency treatment to ensure her puppies were not dying inside her,” McNeight recalled.

All five of Imogene’s puppies survived. Imogene’s mother, Leia, had a litter of 10 puppies in another emergency labor the next day.

Both litters are now considered part of Potter’s Puppies. They have also visited the Waterloo Fire Department and the Oak Hill senior care center.

“They should be held by as many people as possible,” McNeight said.

She explained that being exposed to a variety of people early in life helps them become comfortable in many environments.

The police and fire departments are ideal places to visit because the puppies are usually not exposed to many “big men,” McNeight said.

The puppies will be “imprinted” at eight weeks to deal with a number of medical conditions for people around the country. Imprinting involves training service dogs to smell different conditions and signal the owner if a situation is about to occur.

For example, for a diabetic, the dog is taught to bump the leg of the owner to signal there is something wrong and then give a paw if the diabetic is low or spin in a circle if the owner’s blood sugar is high, McNeight illustrated.

Potter’s puppies will be going to Florida, Colorado and Canada, among other places, for a variety of conditions including diabetes, narcolepsy, postural orthostatic tachycardia syndrome and migraines.

In her 11 years of training, McNeight has only had three litters “because it takes so much effort to raise them properly.”

McNeight also mentioned that while 10 are going “home” this week, there are several service dog candidates available from the litter “as well as pet picks that are also searching for their Christmas miracle: a home of their own.”