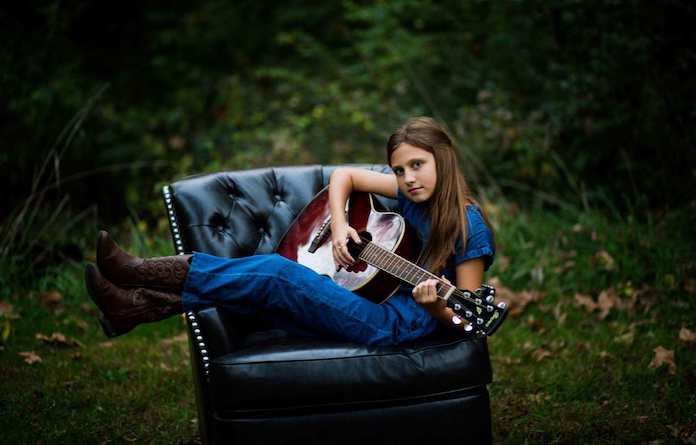 At just 12 years old, Waterloo native Raelynn Patterson has stunned the Monroe County area and beyond with her voice, gaining her the attention of country stars Ryan Daniel and Molly Lovette this past summer.

Patterson played her first paid gig last August with Lovette at Freedom Jam, which led her to meet headliner Ryan Daniel and eventually travel to Kansas to perform with him,

But her musical journey started long before then.

“I’ve been singing for most of my life, probably since I was a toddler,” Patterson said.

This is something Michelle Scharringhausen, Patterson’s mother, can attest to.

“She’d be in her carseat in the car and I would be trying to talk to her, and she would look up at me with these sweet big eyes and say, ‘Mom, can we stop talking and you just turn the music up, please?’” Scharringhausen said. “She would try to harmonize with us when we were putting her to bed when she was little singing her nighttime songs. She would try to harmonize with ‘Twinkle, Twinkle Little Star’ and ‘You Are My Sunshine.’”

Scharringhausen said it wasn’t until Patterson’s guitar teacher Josh Boyer pointed out Patterson’s talent that she realized just how special of a gift her daughter had.

Scharringhausen approached Boyer – who at the time frequently played in Hope Christian Church’s band and is now a pastor there – a few years ago about teaching Patterson guitar.

Boyer said he was impressed by how quickly Patterson could learn songs.

“She’s unlike any other student in that her memory is crazy,” Boyer said, adding that he lovingly calls Patterson a “freak of nature.”

He said during one lesson, Patterson began singing along while playing Bruno Mars’ “Count on Me.” This was the first time Boyer had heard Patterson sing, and he was – like all who hear her – blown away.

Patterson sounded like an adult with immense musical training, he said.

“Everybody’s mouth drops open when they see how young she is,” Boyer said.

A video Boyer posted on Facebook piqued the interest of Brian Judy, the organizer of a non-profit concert series that benefits veterans and first responders called Freedom Jam who had also done fundraising for Boyer’s daughter Lydia when she was ill.

From there, Judy arranged for Patterson to sing with up-and-coming country star Lovette at the 2021 Freedom Jam, Scharringhausen explained.

“They sang ‘One Woman Show,’ a girl power song. They sang that to tell the world that if you have a dream, don’t let anybody stop it even if it has to be a one woman show,” Scharringhausen said.

It wasn’t only the crowd Patterson won over, though.

Ryan Daniel, the show’s headliner, later connected with Scharringhausen and asked that Patterson share the stage with him in March at the Emporia Granada Theatre in Kansas.

“I really enjoy playing, and then the fact that other people think that I sound so good that they want me to play with them is really exciting,” Patterson said. “(It’s exciting) to know that I could get really far with just playing music.”

Daniel and Patterson sang his original song “‘Like America,” and then Daniel surprised the audience by having Patterson lead Fleetwood Mac’s “Dreams.”

“We had sent a list of my top 10 songs for the band to choose that they could learn in a short period of time,” Patterson explained. “I’m really glad they chose (“Dreams”) because I feel like it shows so much of my low range and a little bit of my high range, because it has a little bit of both.”

Allowing Patterson to showcase her versatility is a key component when choosing the set list of her and Boyer’s local gigs, Boyer said.

Those who have seen her at Stubborn German, Washy’s, Outsiders, Back Street Wine & Dine and other local venues have enjoyed everything from classic rock to country.

“Her range and talent is pretty incredible,” Boyer said.

Patterson’s dream is to become a headliner herself one day, but she said she still knows she can make a difference through song.

“If she doesn’t get the chance to make it big in music, she wants to do music therapy for sick children in pediatric hospitals,” Scharringhausen said.

Patterson will be playing at the Collinsville American Legion’s pavilion from 5:30-8 p.m. Friday, June 3; at Coon Dog’s Saloon in Coulterville from 3-6 p.m. Sunday, June 5, and West Park Bowl in Columbia from 2-5 p.m. Sunday, June 12.