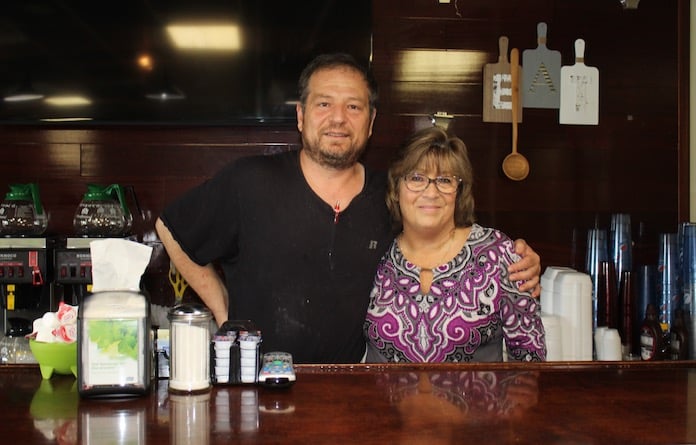 After 22 years running Sunrise Restaurant in St. Louis, John Dinceroglu traded the hustle and bustle of the city for the quaint atmosphere of Millstadt to open a new restaurant with the same name.

Dinceroglu and his business partner and co-owner Gene Schkengost recently opened the breakfast-lunch diner in Millstadt after Dinceroglu’s St. Louis restaurant was forced to close due to COVID-19.

It wasn’t long until Dincerouglu decided it was time to get back in the restaurant game.

“After several months, we started looking for another location. Either it was too small or too big, or rent was too high or we had no parking, it was (never) the right one,” Dinceroglu said.

That is until he stumbled upon a lease open next to Smokin K’s BBQ & More along Route 158.

“It was a former Mexican restaurant and we said ‘Let’s try it and see what happens,” Dinceroglu said. “We were kind of afraid because it was a small town, … and in St. Louis, it was a big city.”

This was not the first time Dinceroglu took a leap of faith, though. When he was just 18, Dinceroglu left Turkey and came to the U.S. as a college exchange student. He soon became acquainted with the American restaurant business.

“I worked at restaurants back home, as a part-time winter and this and that, but when I came here, my brother was in the restaurant business already, so I started working with him and that’s it,” Dinceroglu said.

Within three years, Dinceroglu and his brother opened Sunrise in St. Louis. After being there for over two decades, Dinceroglu naturally found it hard to leave, as did Sunrise manager Sandy Wilke, who worked with the family for approximately 27 years.

“I started working for (John’s brother) years ago. We had a restaurant in Maryville called Country Junction Restaurant, and then we went over to St. Louis and closed that one down,” Wilke explained. “St. Louis was just a family-type business where everybody in there was like family. It was really hard leaving St. Louis because of the customers. I miss them.”

This bond is so strong that many customers from St. Louis have driven 40-50 minutes to visit the new restaurant. Wilke said the closeness between staff and customers is unique for a big-city environment.

“You would not have thought it would be like that, but it was,” Wilke said. “Being there for 20-something years, I would say the majority of our customers … are elderly, so we’ve seen a lot of them who have passed away and we went through the heartache with them and their family … you just get a special bond with people.”

As a self-proclaimed “city boy,” it took Dinceroglu some time to adjust to the quietness of Millstadt. In order to spend more time with his wife and three young kids, Dinceroglu knew the new restaurant would need to close before dinner.

Millstadt’s good schools fit into Dinceroglu’s commitment to his family.

“I like the big cities, but I have little kids and it’s better for them here,” Dinceroglu said. “I like it here, it’s really safe and quiet. I go to St. Louis and I want to come right back here. (There) you have the traffic, there’s just no traffic here … and no crime. I can’t expect more.”

Dinceroglu said he also is impressed with how friendly the people of Millstadt are.

“Everybody was so nice to us, so friendly, I had never seen anything like it in St. Louis,” Dinceroglu remarked. “(In St. Louis) for some customers I cooked their eggs nearly 10 times (because) they were not thin enough, not hard enough, ‘I want cheese in it, not on it,’ or ‘I want it on the side.’”

For those wanting to join the Sunrise team, they are hiring servers, bussers and cooks. Sunrise Restaurant is open daily from 6:30 a.m. until 2:30 p.m.