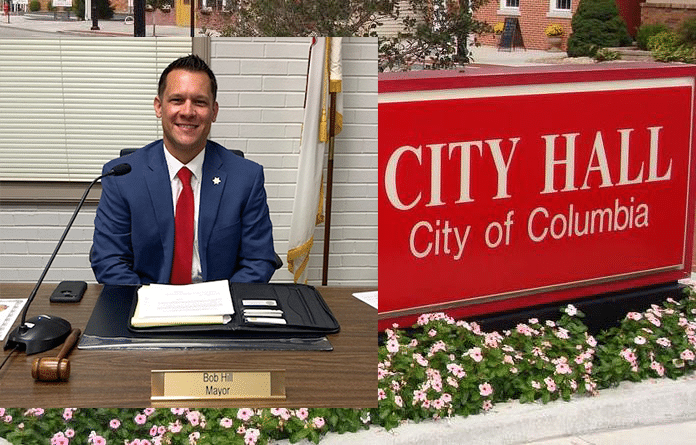 The Columbia City Council will now have four new faces at its meetings after a new mayor, city clerk and two aldermen were sworn in Monday night.

“It feels good,” Hill said of taking office. “It’s kind of surreal, in a way, because I grew up here. To represent the citizens of my hometown feels really good.”

Hutchinson resigned as mayor in early March after being indicted in federal court for making a false statement to the Metro-East Public Corruption Task Force regarding his business interest in a city’s insurance contract.

Now that his term has began, Hill said his first goal will be working on the city’s comprehensive plan.

The first step of that process is to send a survey to residents “to see what they like about the city, to see what things that could be added to add to our city and things like that,” Hill said.

“That would set up our areas where we want to do our comprehensive planning and things like that,” he said.

Hill’s other goals for the rest of this year include continuing city infrastructure upgrades and a tradition of fiscal responsibility and redoubling efforts to partner with community organizations and the Columbia Chamber of Commerce to attract appropriate commercial growth.

A final objective Hill said he plans to focus on is the city’s public safety complex.

“We’ll explore the different options with our public safety complex to see what’s feasible there,” he said. “I’m not going to do anything that’s going to raise our taxes on our already highly taxed residents. It is desperately needed. The fire, police and EMS have definitely outgrown the facilities we have in place.”

“I’m excited to get started,” Hill added. “I’m here to serve (Columbia residents), whatever they need.”

Hitzemann also swore in his brother Andrew Hitzemann, who ran unopposed for Columbia City Clerk and will replace Hoeffken in that capacity.

The two new aldermen are Doug Garmer in Ward I and Paul Khoury in Ward III. Garmer and Khoury won the seats from longtime incumbents James Agne and Gene Ebersohl in the April election.

Ward II Alderman Mark Roessler and Ward IV Alderman Mary Ellen Niemietz were also sworn in for their next terms. Both ran unopposed.

Once the new council was seated, the only order of business was the recognition of Agne, Ebersohl and Hoeffken for their years of service to the city.

Hill began by listing Agne’s accomplishments, which include 32 years of service, eight years as a member of the Columbia Plan Commission and 24 years as alderman.

Next to be recognized was Ebersohl, who served as acting mayor the past two months. He had been an alderman since 1993.

Hoeffken was also recognized for his time as city clerk, five years as a member of the Columbia Plan Commission and seven years as Columbia Emergency Management Agency Director.

Before the new members were sworn in, there were a few items for the previous council to wrap up.

The first item of unfinished business was to approve a sign variance request for Harres Home Furnishings & Appliance at 900 Admiral Weinel Boulevard.

Agne abstained from that vote. As a rule, the official recorded minutes must reflect why an alderman abstains from a vote.

Agne referred to the city’s comprehensive plan from two decades ago, noting that the original plan for a parkway project included “high standards” and “tasteful” signage along Route 3, the city’s main traffic corridor.

The new Harres sign will replace a changeable message board with an “electronic message center of approximately the same size,” a type of display Agne has previously argued against.

“There’s 35,000 cars that go through there every day,” Agne said, pointing out that people “judge (Columbia) by that image. These message boards just look tacky, and once we get 20 of them out there, it’s gonna look like a carnival. I think the City of Columbia deserves better signage.”

The motion to approve the variance passed unanimously, with Agne abstaining.

In other unfinished business, the council approved a resolution to proceed with improvements to the GM&O Heritage Trail and also approved a preliminary engineering agreement with Gonzalez Companies, LLC, for a reconstruction project on Centerville Road.

Varsity Striping & Construction Company was awarded the bid for pavement restriping in the amount of $13.495.60.

The council then adjourned “sine die” to allow the new council to be seated.