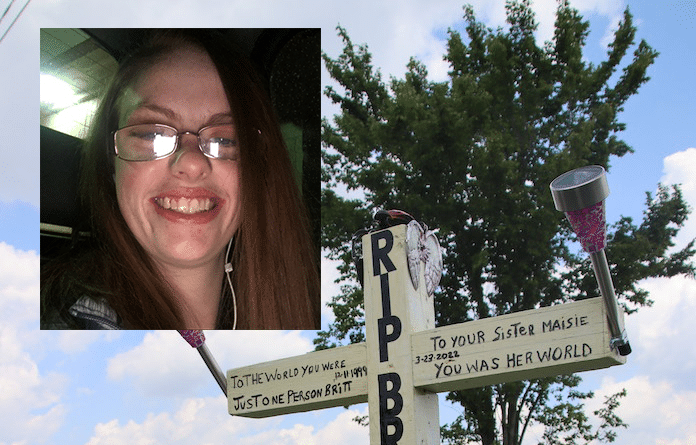 A white wooden cross displayed just north of Mobil On The Run along Route 3 in Waterloo serves as a daily reminder of a young life taken too soon.

Emergency personnel responded shortly before 8:15 p.m. March 23 to the report of a subject being struck by a vehicle in the roadway at 1000 N. Illinois Route 3.

Jett, 22, a former Madison County resident who lived at that time near the crash location in the 1400 block of Jamie Lane under the court-appointed guardianship of Kimberly and Jonathan Smith, was pronounced deceased at the scene.

According to the Waterloo Police Department crash report, a red 2012 Chevrolet Camaro driven by Delline R. Busby, 67, of Columbia, was traveling north in the right lane of Route 3 when Jett was struck. Jett was found along the eastern curb of Route 3 just north of the gas station and had sustained  massive head trauma.

Busby told police she “thought she had struck a deer” and pulled over a short distance north of the collision to call 911.

Busby was cited shortly after the crash by Waterloo police for failure to reduce speed to avoid an accident, but the Monroe County State’s Attorney’s Office later filed a motion to dismiss that charge.

Waterloo police requested an Illinois State Police traffic crash reconstruction unit to assist in an investigation on this incident.

Per the final ISP report, which was obtained earlier this month by the Republic-Times, the weather at the time of this incident was “overcast with light rain” and the roadway was wet.

Jett was attempting to cross the entirety of Route 3, the ISP findings state, and walked into the path of Busby’s Camaro. She had no reflective clothing on at the time of the incident.

The ISP report further states that the WPD interviewed local resident Gerald L. Sickmeier about the incident. Sickmeier told police that he was met in his driveway by Jett at about 7:30 p.m. the evening of her death. He allowed her to use his cell phone.

Sickmeier told police that Jett was crying and had made a call to someone “requesting to be picked up.” Sickmeier further related to police that on this call, he overheard Jett “making suicidal statements.”

Also in the ISP report, the narrative states that the WPD interviewed Jett’s guardians.

Kimberly Smith told police that at about 7:40 p.m., Jett decided to go for a walk. She said it was understood that Jett was to be home at 8 p.m.

Kimberly Smith further told police that Jett rarely left the area of a few blocks from home when walking, and the Smiths thought she may have journeyed toward Mobil On The Run to find a phone.

If you or someone you know is experiencing suicidal thoughts or a crisis, call 1-800-273-8255 or text “HOME” to the Crisis Text Line at 741741. These services are free and confidential.