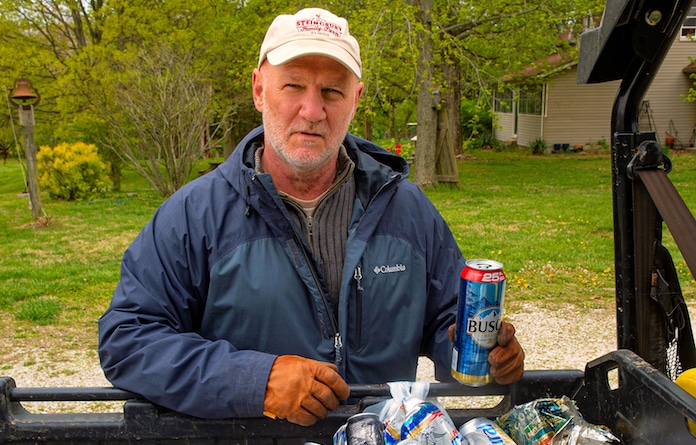 John Steingruby of Maeystown wants to keep Monroe County beautiful, and he has a plan to do just that.

He recently addressed the Monroe County Board of Commissioners about the amount of litter he sees on the side of the road and collected on people’s property. He said the goal of speaking at the meeting was to raise awareness of the issue.

While speaking with the Republic-Times recently about the amount of trash in the county, Steingruby recalled a trip to Kansas City in which his GPS took him to the wrong section of a long street. He said that part of the neighborhood was “unbelievably filthy,” and Steingruby began to wonder why.

“It gets that way when people don’t see it anymore,” he explained.

Steingruby believes people are becoming blind to the trash piling up in portions of Monroe County.

“We’re lucky to live here. Monroe County is a beautiful place,” Steingruby said, adding he has “lived in a lot of places, but I always come back here.”

“The problem with trash is that it will just accumulate more and more. In 10 years or 20 years, it won’t get better” on its own.

He did some research and contacted his local road commissioner, but he found there is “no one in the county responsible” for keeping county roads clean. County workers clean high-traffic roads twice a year, but there is no one assigned to the large network of less-traveled roads in Monroe County.

Taking the attitude of “it starts here,” Steingruby began to think of solutions, something he has done throughout his career.

Steingruby, a director of program execution for The Boeing Company, knows how to complete a project. He also knows that it will take the entire community to keep the area litter-free.

He told a story of a project in Czechoslovakia in which a squalid factory became one of the leading logistics hubs in the region. The first staff meeting took place in a bathroom, which struck Steingruby as “strange” until the reasoning was explained.

The manager said “it starts here” and the team was instructed as a primary goal to make the bathroom spotless and keep it clean. From there, morale improved, the company culture changed and the factory was eventually revitalized.

“It starts with the basics,” Steingruby said, noting that once people are aware of the problem, the next step is to stop more trash from piling up.

“Let’s make it not OK” to litter, he suggested as a good place to start.

He noted that people know that littering – and driving with open alcohol containers – is illegal, but they do it anyway because they know the law is rarely enforced.

“Is it OK?” to disobey alcohol and littering laws, Steingruby wondered.

“The laws are there, but we don’t enforce them,” he continued. “A few fines might get people’s attention,” he said, also realizing that “if the approach is with pride, it works better. If it is punitive, probably not as much.”

“We don’t need more laws. If someone’s proud of something, they’re more likely to take care of it.”

The next step is to get the trash picked up.

For private properties that have large amounts of litter and debris, he suggested a “see something, say something” policy in which homeowners are contacted directly by concerned citizens who then alert proper authorities only if nothing is done to remedy the situation.

For public areas, Steingruby’s experience in team building and personal determination to clean up the county becomes apparent.

He has already contacted Monroe County Sheriff Neal Rohlfing about a mutually beneficial method to get trash off the streets by having non-violent convictions carry a service requirement rather than jail time.

Rohlfing agreed with the premise, explaining that once Monroe County Circuit Judge Chris Hitzemann is the resident judge in the county, the sheriff’s department, state’s attorney’s office and probation officers will collaborate to have trash pick-up as part of sentencing requirements for some convicted of crimes in Monroe County.

In addition to cleaning up the area, Rohlfing noted that it will also “cut costs for the jail,” including food, medical services and liability (insurance) costs” incurred by having inmates in jail cells.

Steingruby believes everyone needs to be involved to get not only the existing trash picked up, but also prevent it from getting there in the first place.

In addition to law enforcement, Steingruby said schools and parents need to get involved to educate and spread awareness of the problem.

Further, in his time leading teams, he has observed that solving the “little things” leads to the larger problem being more manageable. He suggests residents begin by picking up trash in their own yards before going out to clean up other areas.

Steingruby also noted there are organizations that can provide resources to help, such as grants through Anheuser-Busch’s “Keep America Beautiful” program. He recently contacted the company about the grant and they agreed to provide manpower and supplies when Steingruby finalizes a plan..

“There are funds available if you ask for them,” Steingruby said.

He is willing to help lead volunteer groups to get them started, as well. He pointed out that students at Gibault Catholic High School are required to complete service hours and local scout groups might be willing to start trash pick-up efforts.

Monroe County can be kept clean if “everybody does something,” Steingruby concluded.

Nationally, a recent TIME Magazine article suggested that COVID-19 led to an uptick in garbage. Factors leading to the increase include people creating more trash due to more time and undertaking deep cleanings, fewer sanitation workers on duty and fewer volunteer groups picking up litter.

On the state level, trash on highways cost taxpayers $6.1 in 2020, according to  the Illinois Department of Transportation. IDOT also believes the “Adopt-a Highway” trash pickup program was slowed by COVID-19 restrictions.