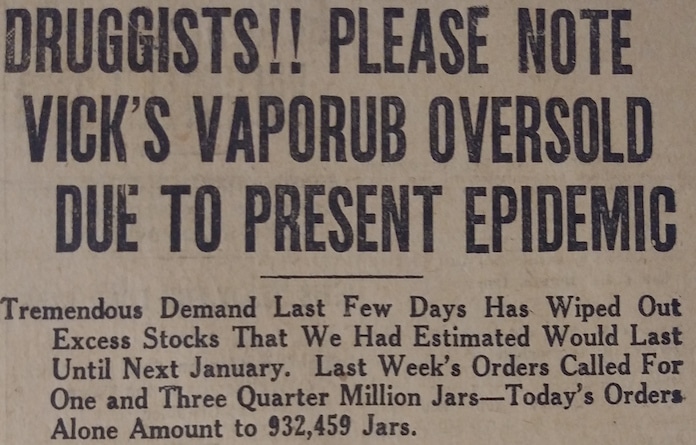 A little over a century ago, the world was facing a flu pandemic. Locally, the response was strikingly similar in nature to measures implemented recently to combat the spread of  COVID-19.

The “Spanish Flu” is estimated to have infected 500 million people – about one quarter of the world’s population at the time – between 1918 and 1920.

The Centers for Disease Control estimates that at least 50 million people worldwide died because of the virus. At least 41 of those deaths were in Monroe County between Oct. 29, 2018 and April 1, 1919.

Columbia had the most deaths reported in that span with 15. Waterloo had 12, Valmeyer had six, Maeystown had four, Hecker had three and Renault reported one death related to influenza.

Monroe County had a population of 12,839 in the 1920 census, making the mortality rate from the flu around .3 percent. That was drastically lower than the national and global average due to quick action and preventative measures locally.

The first local mention of the new influenza was in the “Illinois State News” section of the Oct. 2, 1918 Waterloo Republican newspaper.

News from Springfield reported that only family members could attend funerals of Spanish Flu victims and that they could only view remains through a glass top on the coffin.

By the time the Oct. 9, 1918 issue was printed, the Red Cross had mobilized nurses in accord with a recommendation by the U.S. Surgeon General to assist areas in need. In northern Illinois, hospitals were full and beds were scarce. The Illinois Department of Health ordered that all sick workers be “sent home immediately, with instructions to remain until entirely cured.”

The state also banned visitation to state “charitable and penal institutions,” calling the action “radical,” but insisting that “emergency demands it.”

By the middle of the month, local residents realized the flu was arriving in Monroe County. The Waterloo Times reported in its Oct. 18, 1918 edition that low turnout for a “Liberty Day” celebration in Columbia was due to concerns of spreading Spanish Flu.

By Oct. 23, Waterloo schools and “picture shows” had closed and several scheduled meetings – such as the Monroe County Farmers Institute – had been canceled or postponed. The Times also reported 10-15 cases locally.

The Illinois State Board of Health ordered the closing of all schools in the state on Oct. 30.

Luella Moore, 13, died Oct. 29 of “pneumonia, superinduced by influenza.” She was the first reported Spanish Flu-related death in Monroe County.

A press release from the U.S. Surgeon General published in both papers’ late October issues advised readers of the overwhelming amount of calls doctors were making, noting many were “unnecessary” and urging the public to “distinguish between the cases requiring expert medical care and those which could readily be cared for without a physician.”

Halloween visits were “not so numerous” because of the threat of flu, although there were a few pranks reported – including the disassembly of a mower at a farm near Coxeyville.

On Nov. 1, Waterloo Mayor Henry Mitchell had suspended all public gatherings “not essential to the conduct of the war” in response to state recommendations and that “all persons including children are asked to refrain from gathering on our streets and loitering in front of buildings and public places, spitting on sidewalks and otherwise  violating the laws of public health under penalty.”

The beginning of November also saw 30 new local cases of influenza as well as a small chicken pox outbreak among local children.

Both the Times and Republican newspapers began running notices informing the public about “Spanish influenza” and how to treat it. The notices called for calm from the public stating that “every century has had its attacks. Beginning with 1831, this country has had five epidemics, the last in 1889-90. There is no occasion for panic.”

In the Nov. 13 edition of the Republican – along with front page news declaring “the war is over” – was the obituary of Henry Reichenbach, 49, of Columbia, former State’s Attorney for Monroe County, due to complications from influenza Nov. 11, the same day armistice was declared for World War I.

By Thanksgiving, it seemed the threat of flu was over in Waterloo. Waterloo’s mayor lifted the ban on public gathering on Nov. 14.

“Much credit is due to the physicians of this city as well as the public for their hearty cooperation with the health committee,” Mitchell said in a written public notice.

While Waterloo was starting to recover, Columbia was facing a dramatic increase in Spanish Flu cases and deaths. Even though the Nov. 6 Republican had received news from the area that the flu was “on the wane,” the situation in Columbia did not improve until almost Christmas.

On Nov. 20, over 100 cases of the flu were reported. The Dec. 4 issue carried an obituary noting deceased Henry Selader as the fourth member of his family to die of the flu in Columbia. Schools were reopened at the end of November, but in early December the city reported around 40 percent of students were absent.

By the end of the year, the worst was over. The Jan. 1, 1919, edition of the Republican summed it up by saying “Columbia passed one of the most agreeable holiday festivals in its history. True, many a home had a vacant chair, occasioned by the war and the influenza, but if business is an indication, there was more celebration this year then before,” so much so that a story in the same issue described a “free-for-all fight” at Turner Hall in which the Columbia constable was struck in the head by a chair while attempting to arrest several troublemakers.

There were a few cases in the early months of 1919, but the 1918 version of “social distancing” helped Monroe County and the surrounding region avoid devastation seen in other metropolitan areas on the United States’ east coast, where the flu hit first.

The death rate in St. Louis was much lower, as was the demand on health care facilities.

While COVID-19 is not a flu strain, its spread and impact can still be managed by practicing social distancing and increased awareness of personal hygiene.

History tells us this is so.