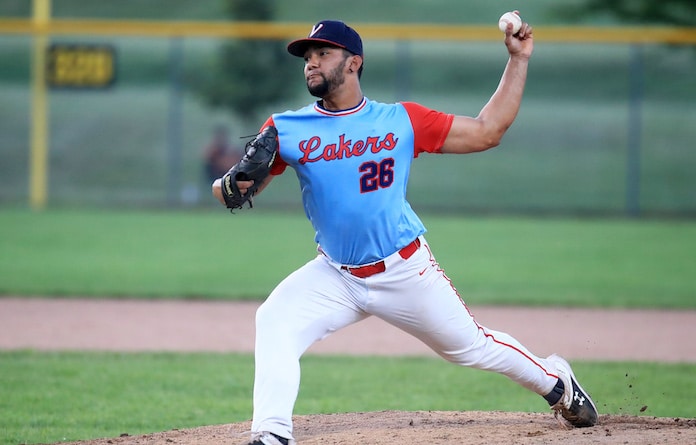 The Valmeyer Lakers swept the Millstadt Green Machine in a key Monroe Division doubleheader this past Sunday.

The game was moved from Millstadt to Borsch Park in Valmeyer due to wet field conditions in Millstadt.

Game one went into extra innings, with the Lakers eventually emerging victorious by the count of 12-5. The contest was tied at 5-5 after seven innings, but Valmeyer plated seven runs in the 11th inning.

Trevor Davis went 4-for-7 with an RBI and two runs for the Lakers. Jonah James went 3-for-6 with two runs and Kenny Otero went 2-for-5 with a home run and three RBIs.

Evan Spears took the loss on the mound for Millstadt in relief of starting pitcher Andrew Yancik.

In game two, Valmeyer won 7-2. Otero went 3-for-4 with two RBIs and pitched four solid innings for the mound victory.

James went 3-for-3 and Ethan Ruff, Jacob Rowold, John Wuelling and Riley McCarthy each collected two hits each for the Lakers.

Valmeyer hosts the Southeast Missouri Tropics for a Saturday doubleheader before playing a pair Sunday at the Waterloo Buds.

Millstadt (11-7) entered Sunday’s twinbill at Valmeyer with wins Thursday over Cape Girardeau and Saturday over the Tropics.

On Thursday, the Green Machine won 11-1 thanks to a five-run first inning. Joey Kossina went 4-for-4 with two RBIs and three runs. John Hilpert add two hits and two RBIs.

Garrett Herring was the winning pitcher for Millstadt, striking out five over four innings.

On Saturday, Millstadt got off to a hot start again in an 8-1 win. The Green Machine led 6-0 after two innings. Tony Kossina went 3-for-4 with two runs, with brothers Joey and Cal Kossina adding two hits each.

Joey Kossina allowed just two hits over five innings for the mound victory. The lefty is 3-3 with a 3.06 ERA this season.

Tony Kossina is Millstadt’s top hitter this summer at .426, followed by Jack Toenjes at .405 with 13 RBIs.

Millstadt plays Wednesday at Belleville, and then hosts Belleville for a Sunday afternoon doubleheader.

Waterloo (11-7) had its Sunday doubleheader against Belleville rained out, and will make up those games this Friday night at SPPS Field in Waterloo.

The Buds are led offensively this season by Nate Albrecht (.431) and Braeden Dobbs (.400).

The top pitcher for Waterloo so far this season is Brooks McDowell, who is 2-0 with a 1.67 ERA.

In addition to games Wednesday and Sunday against Millstadt and Friday against Waterloo, the Belleville Rockies (7-6) play a Saturday doubleheader at Edwardsville.