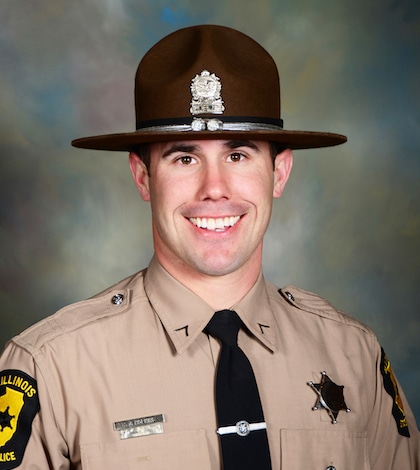 A veteran Illinois State Police trooper from Waterloo has died from injuries sustained in a shooting while executing a search warrant Friday morning in East St. Louis.

“It is with profound heartache and unfathomable sadness that we inform you of the death of Trooper Nicholas Hopkins. Trooper Hopkins laid down his life while protecting the citizens of this state. We are asking the public to respectfully give consideration to the family of Trooper Hopkins and the ISP while we continue to grieve and work through this tragedy,” ISP Acting Director Brendan Kelly said.

“There was an exchange of gunfire at the residence and the trooper was struck,” ISP said.

Hopkins, 33, was rushed to Saint Louis University Hospital. He died shortly after 6 p.m. A father of 4-year-old twins and an infant daughter, Hopkins was a 10-year ISP veteran.

Nick was a 2004 graduate of Waterloo High School. His older brother, Zack, is a sergeant with the Columbia Police Department. Their father is longtime Waterloo alderman Jim Hopkins. Friends and family waited at SLU Hospital throughout the day along with a multitude of law enforcement personnel.

Kelly said during a Friday night press conference at SLU Hospital that Hopkins is “another great hero of Illinois that has paid the ultimate price,” and especially thanked those troopers who performed CPR for an extended period of time on their fellow trooper “to sustain their brother’s life so that his family could see him one last time.”

Kelly added that Hopkins was a “bright light in this world” who will continue to help others through organ donation.

“His family provided support and spent their own time volunteering in the very community that Trooper Hopkins and the Illinois State Police were there trying to protect,” Kelly added.

Backstoppers announced Friday night that the organization is assisting the family of the fallen trooper.

“Trooper Hopkins was a dedicated officer who served our community with honor, bravery and fidelity. He leaves behind an enduring legacy that will live on in the lives he touched; in the work that the courageous men and women of the Illinois State Police continue to perform; and in a community that is safer because of his devoted service. His loss underscores the real dangers that are routinely faced by those who protect and serve us each and every day. Their work is truly heroic, and we are forever in their debt,” U.S. Attorney Steven Weinhoeft said in a written statement.

Three suspects were taken into custody shortly after the incident, Kelly said, and armored police, SWAT and tactical units remained on scene throughout the day.

ISP stated in a late Friday night press release that there was no longer a threat to public safety surrounding the residence in which this incident occurred.

“Today the entire state mourns the loss of ISP South SWAT Trooper Nicholas Hopkins, a young man who dedicated 10 of his 33 years on this earth to protecting the people of Illinois,” Pritzker said. “It is the most courageous among us who choose a life of risk so their communities can go about their lives in peace. The state of Illinois stands with Trooper Hopkins’ family and the entire Illinois State Police family as they grieve the loss of another heroic officer.”

Waterloo Mayor Tom Smith said he has received permission from the governor’s office to lower the flags in Waterloo to half-staff in honor of Trooper Hopkins. An ISP patrol car is parked outside Waterloo City Hall in honor of Hopkins, with residents adorning the car with flowers and other remembrances.

The Dupo Police Department also expressed its thoughts on Hopkins.

“Several of the Dupo officers got to know Trooper Hopkins while assisting the Illinois State Police. Hopkins did not hesitate to repay the favor by assisting our department when he was in the area. We will continue to keep the Illinois State Police, Columbia Police Sgt. Zack Hopkins and all of his family and friends in our thoughts and prayers. God speed, Nick. May you rest in peace, brother.”

On Saturday, the St. Clair County State’s Attorney’s Office charged Christopher R. Grant, 45, with first-degree murder in the shooting of Hopkins. The charge alleges Grant shot Hopkins with the intent to kill or do great bodily harm, thereby causing his death.

Bond was at $5 million and Grant remains in custody at the St. Clair County Jail in Belleville.

The body of Hopkins returned to Waterloo on Monday in a police-led procession from St. Louis. A large number of local residents lined the streets to pay their respects to the fallen hero.