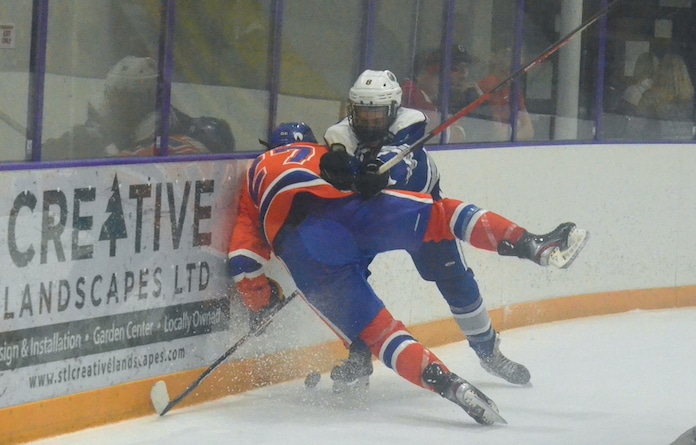 The new year will kick off with another rivalry hockey battle between the Freeburg-Waterloo Raging Bulldogs and Columbia Ice Eagles.

The two local squads, who rank atop the Mississippi Valley Club Hockey Association Varsity East standings, will clash this coming Tuesday night at the McKendree Metro Rec Plex in O’Fallon.

The Raging Bulldogs and Ice Eagles played to a 4-4 tie in a fiercely contested match on Nov. 18.

Freeburg-Waterloo is the highest scoring team in the league; Columbia is among the hardest teams to score upon.

On Thursday, the Raging Bulldogs suffered a 3-2 loss at the hands of Granite City, which leads the MVCHA Varsity West standings at 12-1-1.

Conner Blair scored both goals for the Raging Bulldogs.

Last Tuesday, Freeburg-Waterloo picked up a big win over O’Fallon, 10-7.

Columbia (11-0-4) kept its unbeaten streak alive courtesy of a 7-0 victory over East Alton-Wood River on Thursday.