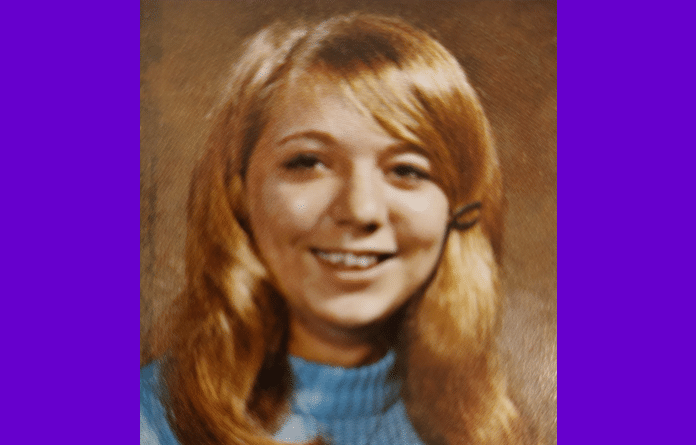 Miller, who was honored as a recipient of the VHS Distinguished Alumni Award last year, wrote a $300 check toward the purchase of a new costume on behalf of her family members that served as VHS cheerleaders over the years.

In addition to this check, Miller donated proceeds from a 50/50 drawing she won at last year’s banquet to this effort.

The new pirate mascot was unveiled during a recent home volleyball match at VHS.

After her graduation from VHS, she worked as an employee of the State of Illinois until 1978, when she married Butch Castillo and moved to Kirtland Air Force Base in Albuquerque, N.M.

While she moved away from Valmeyer, it was “never far from her heart or family,” alumni society member Karla Bivins said during her induction as a VHS Alumni Society Distinguished Alumna in 2021.

The honor was not only for her contributions to Valmeyer schools, but also for her vast accomplishments and generosity throughout her post-high school career.

While in Albuquerque, she worked for 10 years with  the U.S. Department of Defense as part of the local Military Entrance Processing Station.

She later married Robert Miller, a U.S. Marine, and moved from New Mexico  to Camp Pendleton, Calif., in 1988, where Vicki got a job at the Naval Hospital.

She flourished in that role, establishing several initiatives which are still in place.

In 1990, she organized the first Naval Hospital Camp Pendleton POW/MIA Remembrance service and continued to lead it for 26 years.

Due to her efforts, she was named the California Legislature 76th District “Woman of the Year” in 2017. State representative Rocky Chavez (R-Oceanside) stated “Vicki is one of the most dedicated and distinguished philanthropists in the district and the community is better served because of her leadership.”

In 2019, she was recognized for “going above and beyond her call of duty to assist the community and military members around her. She was one of six honorees across the country picked for the Spirit of Hope (Bob Hope) Award at the Pentagon’s Hall of Heroes in Washington, D.C. For the award, one recipient from each branch of military service is chosen, with the Navy selecting her for the honor.

Also in 2019, she received the honor of the Presidential Lifetime Achievement Award from Americorps and President Donald Trump for her lifelong commitment to building a stronger nation through volunteer service.

Vicki was also a recipient of the 2020 President’s Volunteer Service Award.

Through her astonishing career and extensive volunteerism, the mayor of Oceanside declared Oct. 25, 2019 as “Vicki Kay Miller Day.”

While she plans to retire at the end of 2022 and still lives in Oceanside, Vicki keeps a fondness for Valmeyer in her heart.

Her giving nature is evident through her recent donation to the high school, which provided the foundation for her exemplary career and life.