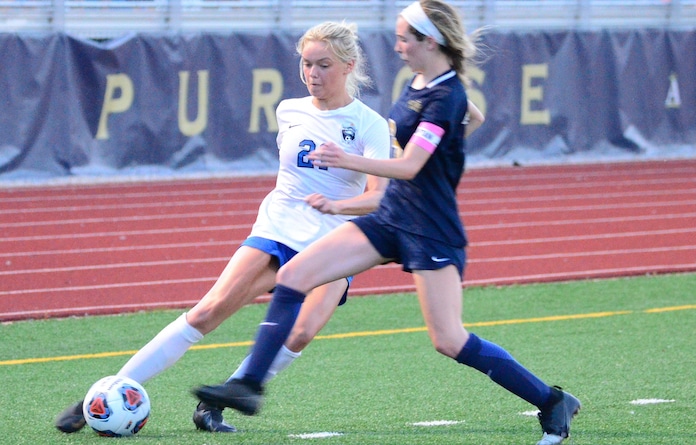 The Columbia and Waterloo girls soccer squads were both playing for sectional championships Friday night, the Eagles in Class 1A at Althoff and the Bulldogs in Class 2A at Triad.

In a back-and-forth battle, Columbia ended its season with a 5-4 defeat. Waterloo gave everything it had against undefeated Triad, falling 1-0.

Both games, played in hot and humid conditions, featured controversy.

Taylor Martin and Alexa Hildebrand put the Eagles up 2-0 less than 15 minutes into the match. Althoff rallied to tie the game at 2-2 early in the second half. Maddie Mauch put Columbia back up at 3-2 before Althoff scored three times.

Allison Carr scored in the 74th minute to make it a 5-4 contest, but Althoff held on for the sectional title.

Althoff’s Reagan Moody was the star of the night, scoring four goals.

At Triad, a punch save by Waterloo goalkeeper Lexi Stephens appeared to glance off the football goal post just above the crossbar and back into play, resulting in a first-half header goal by Triad. It was the only goal of the game.

Waterloo head coach Chad Holden argued it should have been ruled a dead ball, but to no avail.

Stephens made multiple dazzling saves on the night for the Bulldogs, who ended their season at 13-7-2. Triad remains undefeated at 21-0-1 and has allowed just three goals all season.

Triad is 41-2-4 against its Mississippi Valley Conference rival since 2000.