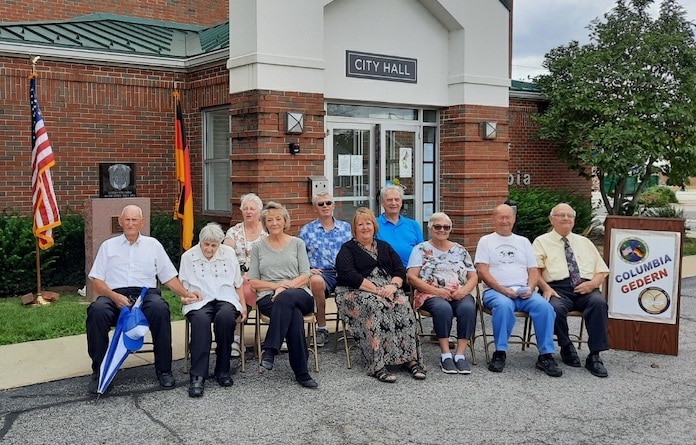 If a person in Monroe County has the last name Kaufmann, Fults, Koch, Taake, Rick (or Rueck), Schaefer, Prange, Hoffmann, Meyer, Krebel, Melliere, or one of more than 50 other common last names of the area, there’s a chance that individual is a descendant of the immigrants from Wernings, Germany, who set sail for America in 1842.

A complete list of the surnames was on display during a Sept. 19 ceremony at Columbia City Hall to unveil the Trout Crest Monument and commemorate the 25-year Sister City of Columbia partnership with Gedern, Germany.

The “trout crest” on the monument shows two mirrored, upward-facing trout. It is from the Gedern coat of arms and is also featured on the flag of Gedern.

The partnership between Columbia and Gedern was formally signed in 1993 by Bürgermeister Rainer Schwartz of Gedern and Mayor Lester Schneider of Columbia.

Columbia Mayor John Coats was also active in the initial stages of the partnership.

Regular adult and student exchanges have taken place between the cities since then.

The commemoration last Sunday was planned to coincide with the same date in 1842 when 156 citizens from Wernings, Germany – at the time a small settlement on the outskirts of Gedern – departed for the United States, eventually settling in Monroe County.

The 1842 immigration was prompted by decades of hard economic times in Germany. A local teacher, Wilhelm Reifschneider, encouraged residents to think about immigrating to America. The residents in Wernings and some from neighboring communities gathered and voted to immigrate and departed on Monday, Sept. 19, 1842.

Ten descendants of those original immigrants were present for the Sept. 19 ceremony.

One of those attending the ceremony was Rich Binder, a direct descendant of three families that arrived here from Wernings – Acker, Hilger and Rueck.

“These families formed the foundation needed for the growth of Columbia, Waterloo and Millstadt,” he said.

Another descendant in attendance was Pastor Ivan Horn.

“Our early Hergenroeder ancestors are buried at Martini Cemetery and were part of the group coming to America in 1842 from Germany,” he said.

The dedication was also originally planned to coincide with an official visit from a delegation from Gedern, but the visit was postponed until September 2022 due to COVID-19.

Conrad reported that Ingrid Soraghan, president of Sister Cities of Columbia, presided at the dedication, which started with the playing of the national anthems of both the United States and Germany.

She welcomed the Wernings descendants as special guests as well as other sister cities members and city officials including Columbia Mayor Bob Hill and Alderman Mary Ellen Niemietz.

“We would like to welcome as special guests the descendants of those brave immigrants who left their homeland of Wernings, Germany, 179 years ago and settled in our area. We also want to welcome the exchange student from Gedern, Lena Volz, who is here for the full year, attending Columbia High School,” said Soraghan.

The proceedings were also live-streamed on Facebook to allow Gedern residents to watch the event.

“Many heartfelt greetings to our friends in Gedern,” Soraghan said in welcoming the virtual German guests. “We are happy that you can participate in this dedication, even though you are not here in person. There is no distance in our hearts – you will always be close to us.”

Soraghan explained that “the monument you see before you was the gift from Gedern Verschwisterungsverein (Gedern Sister Cities) given to us in honor of the 25th anniversary of our partnership which we celebrated during our official visit to Gedern two years ago.”

Volz unveiled the monument as the Gedern representative and she was flanked by a banner with the surnames of some of the original immigrants and their descendants.

Those names were researched by genealogist Mary Ellen Huetsch of Waterloo, who also identified the descendant families, many of whom remain in the community.

Huetsch has been doing research on the Wernings immigration and will soon be publishing a book on her findings titled “1842 Wernings Immigrants Arrive in the U.S.A. – A Follow-up of Those Brave Germans and  Their Descendants.”

The book is a quasi-sequel to Yvonne Schaefer’s 1992 book titled “1842 Wernings Emigrants.”

While Schaefer wrote about the journey to America, Huetsch is chronicling what happened during and after the arrival.

With Schaefer’s work as a starting point, Huetsch said newspapers have been the most useful source during her research. She noted that obituaries of the era were especially helpful, as many included details of immigrants’ voyages across the ocean.

Huetsch presented some of her findings during the monument dedication. She revealed details about the immigrant families and the possessions they brought with them. She also displayed a bottle of schnapps, noting that a considerable quantity of the popular liquor was aboard the immigrants’ ship named the “Mimer.”

Shortly after the immigrants from Wernings left their homes in 1842, the houses were dismantled and the land turned into pastures.

All that had remained were the ruins of the local church, the Marienkirche, but the Wernings immigrants brought a lasting legacy to Monroe County.

The Trout Crest Monument is located near the east entrance of Columbia City Hall at 208 S. Rapp Avenue.