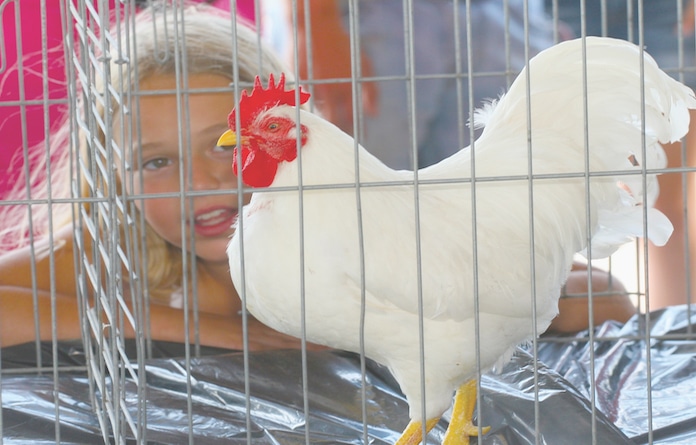 Editor’s note: This is the third and final entry in our series looking back through the history of the Monroe County Fair, which was canceled this year due to the coronavirus pandemic.

As other county fairs faced declining state revenue and attendance, the Monroe County Fair of the last 22 years continued breaking records and maintained its place as one of the foremost events in the community.

After the 50th anniversary celebration, the 1998 fair saw the addition of motorcycle and four-wheeler races, both of which had not made an appearance at the fair in years.

“The local participation in the four-wheeler races really made the night,” Monroe County Fair Association President Ron Niebruegge told the Republic-Times in 1998, noting there were 41 total entries.

That year’s fair also saw the Harrisonville Telephone Company’s firework display become a tradition, as it was held for the second consecutive year.

Two years later, the livestock portion of the fair experienced growth when the fair association added a new building for poultry and rabbit entries.

Previously, the fair had to put up tents to house all the entries, so it spent a couple years constructing the new building. It was over 9,000 square feet.

On the entertainment side, the fair board realized it needed more parking for the fair’s most popular nights.

On demolition derby night in 2000, for example, fairgoers had to park as far away as Metzger Equipment Company and on both sides of Route 156 after about 4,000 people attended the event.

There were so many people at the fair that the gates had to be closed for about an hour for the first time ever.

“It just got so crowded last year we just had to shut the gates,” Monroe County Fair Association Secretary George Obernagel told the Republic-Times the next year. “We never want to do that.”

At the end of the 2000 Monroe County Fair, the fair board announced it would receive a $125,000 grant from the state. With the help of Republican state representative candidate Harry Jankowski, the fair association secured the grant to buy more land for parking.

By the next year, it had purchased 6.4 acres of land for that purpose.

“That’s why we bought this land: to help please all the patrons of the fair and for them to enjoy the entertainment that’s there,” Obernagel said. “We don’t want to chase them away. We also want to provide safety and to make it easier to get in and out instead of people parked behind each other.”

The fair board also added a new beer pavilion, dance floor and office that year.

Additionally, 2001 marked the first time in years the fair did not close with a lip sync contest. It was replaced with a performance by a local band.

At the 2002 fair, another entertainment option debuted as the fair hosted a 4×4 truck pull.

Another new, long-awaited feature was air conditioning in the fine arts building.

The demo derby also broke its attendance record, as around 5,000 people watched that event. It also had a record 115 drivers.

“We had a tremendous fair,” Obernagel said at the time. “Crowds were up despite the heat. Participation in the various shows was also up.”

After several years of small changes, the 2003 fair saw a major addition.

The fair board added new bleachers to accommodate the ever-increasing demo derby crowds, providing 850 more seats for patrons with the help of volunteers.

“Each year we have a good group of volunteers turn out to help with whatever tasks need to be done, and we invite anyone in the county to come out and share their talents in helping get ready for the fair,” Niebruegge told the Republic-Times in 2003. “Our county fair is one of the best fairs around, and this is primarily due to all the people of our community that donate their time and efforts to the fair together.”

That increased capacity came in handy, as the fair saw around 3,000 more people than the previous year, bringing total attendance to about 20,000.

“Every night of the fair was the most people we ever had on those nights,” Monroe County Fair Association Vice President Ron Mueller said at the time. “It was a very successful fair. I think everybody pretty much liked it. It brings the whole county together.”

The fairgoers had a couple special features to enjoy.

“I wanted to put her in the pageant for the sole purpose of letting people know how great she is doing, that she can participate like any healthy child,” Marta’s mother Karen told the Republic-Times. “It’s fun for her and exciting for me. It doesn’t matter if she’s a winner. She’s already a winner.”

Neary went on to be crowned 2016 Monroe County Fair Queen.

The demo derby, which was limited to 90 entries this year, was won by John Toenjes of Waterloo. The 37-year-old had won seven derbies in 18 years of participating at that point.

“I always tell everyone it’s not a particular kind of car or even the driver that wins the derby,” Toenjes told the Republic-Times in 2003. “It’s the engine and transmission.”

The fair broke more records the next year, as attendance was the highest ever and over 200 new exhibitors, mainly in the livestock and fine arts categories, entered.

Attendance held relatively steady for the next few years.

The 2008 fair, the first for the new sheep and goat barn and remodeled swine barn, set attendance records again despite 5-6 inches of rain falling during the fair week, including Thursday night.

“We had record attendance,” Monroe County Fair Association President Don Schrader said at the time. “We had big crowds and lots of vehicles.”

In 2009, the fair had some special attendees as a group of antique tractor enthusiasts visited the fair. John Meier of rural Waterloo served as the group’s tour guide for this area, as they were traveling across the country.

Overall, the event was considered one of the best fairs ever in terms of money raised and attendance.

That came despite decreased state funding. In years passed, the state had reimbursed county fairs around $30,000 for fairground maintenance and paid for about 66 percent of premiums.

It only reimbursed at about 32 percent of those levels in 2009, and that dropped to about 17 percent in 2010, Obernagel told the paper at the time.

That came at a time when insurance, utilities and other expenses became more expensive.

“We don’t make any money at this,” Obernagel said. “We’re just trying to exist.”

Gate receipts were down that year after 2009’s excellent attendance, but not by much. A season pass cost $35.

Although it did not break monetary records, the 2013 Monroe County Fair again ranked among the best fairs in history with unseasonably warm weather, record crowds and record food stand sales.

“It was probably the best attended Monroe County Fair ever,” Obernagel said. “Words can’t describe it. People just loved it.”

Attendance dropped slightly the next year, though there were more entries in the demolition derby and Figure 8 races and the fair board added a Kloepper tournament.

The fair had another banner year in 2016, as the world-famous Budweiser Clydesdales returned to the fair for the first time in 34 years to celebrate Monroe County’s Bicentennial.

The horses, along with Clyde the Dalmatian, remained at the fair for six days.

“The Clydesdales sure brought a lot of people out to the fairgrounds,” Obernagel noted at the time, while also reporting record-setting attendance.

In addition to the animal celebrities, a special fireworks display commemorated the county’s 200th birthday.

Looking ahead, Obernagel said the fair will continue to combat decreased state funding by renting the fairgrounds out during the off-season, obtaining sponsorships, earning money from its headliner events and relying on volunteer work.

Based on his over quarter-century of experience, Obernagel said if any fair can weather the challenges ahead, it is Monroe County’s.

The COVID-19 pandemic resulted in the cancellation of the 2020 fair.

“I think our fair’s still growing, and people are coming to it,” Obernagel said. “It’s reasonably cheap. But after this year, I don’t know what’s going to happen. There’s so many unknowns.”