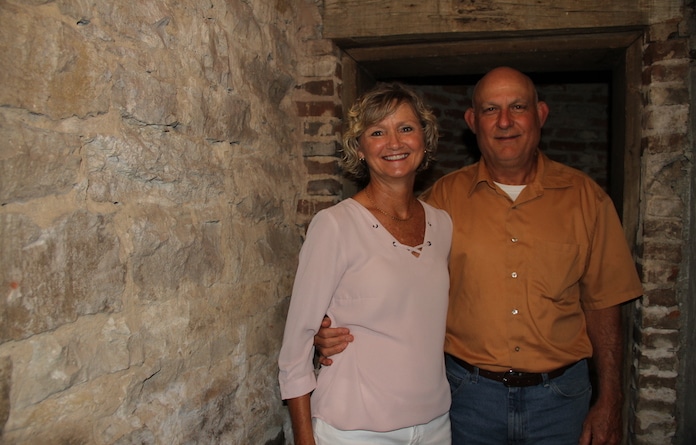 On June 15, hundreds of people gathered near the Monroe County Courthouse for “Waterloo Speaks” to protest racial inequality and police misconduct.

The goal behind this protest was to enact social change in the area through helping minorities.

The peaceful protestors were, in fact, proclaiming beliefs felt by Illinois citizens since the state’s infancy.

Through much of the early 1800s, Illinois served as a path to freedom for fugitive slaves traveling between safe houses and striving for freedom in the North. Since Missouri was a slave state, abolitionists across the river, such as Alton’s Elijah Lovejoy, utilized the Underground Railroad to protect and guide runaway slaves to freedom.

Recognized stops on the Underground Railroad are found throughout Illinois. Historians often point at the joining of the Mississippi and Illinois rivers in Grafton as a starting path for many runaway slaves.

However, after completing a project on the history of Waterloo a few years ago, Gibault Catholic High School students uncovered evidence the Underground Railroad might have made its way through Waterloo.

Nestled into what is now the basement of Bean Tree Café at 219 S. Main Street, the Gibault teacher in charge of the project at that time, Matt Schweizer said “the basement has some odd architecture I believe was certainly used for hiding something.”

The lot where the building is located dates back to 1818, when Daniel P. Cook and George Forquer surveyed the property. In 1844, Thomas J. Wells sold the lot to John H. Pirtle. In 1846, Edward O’Melvany sold this property to Harvey O’Melvany.

Construction of the building was completed in 1850. In 1858, William R. Morrison sold the property to Dr. Thomas J. Cornell.

Cornell then sold it to John Schuell in 1863.

Finding the history of who owned the building was an easy task for Schweizer and his students. The difficult part was proving the events they claimed happened.

“The difficult thing about finding proof of the railroad is that it has always been oral history or legends pointing toward the railroad in Waterloo,” said Schweizer, who now serves as brewmaster and general manager of Hopskeller Brewing at 116 E. Third Street in Waterloo.

That challenge of finding physical proof is a sentiment shared by many historians in Illinois.

“It’s been a long argument of how organized the Underground Railroad was,” said Dennis Naglich, an archaeologist at the Illinois State Museum. “There can’t be that much public knowledge (back then) or the other side would catch on.”

“You will rarely find physical documentation or proof of the location of a stop,” Schweizer said. “Not only was it a secret, but a secret kept over 150 years ago.”

When asked if she believes the Underground Railroad could have been housed in her building’s basement, Bean Tree Café owner Lisa Jones said “it very well could be,” adding “there are just way too many odd quirks in it for it to seem like a normal basement.”

Some of these unique quirks are tight curved walkways, a small opening in the wall, and a window Jones believes was a lookout.

Regardless of whether the Underground Railroad had a stop in the basement, Jones is still proud of the history within that building.

“The story of the railroad being in our building has been floated around the town for many years, but what is true is that we have almost 200 years of local history in these walls and it’s great to be a part of that,” Jones said.

Now almost 170 years since slavery was abolished in the United States, the Underground Railroad has resurfaced as a legitimate research topic for historians in the St. Louis area.

“The public is interested in hearing the stories of these people,” Eric Robinson, an assistant history professor at St. Louis College of Pharmacy, said. “Why did they escape, who helped them and where did they go?”

Although the truth of an Underground Railroad in this town might be lost to history, the purposes behind it still reign true today.

The peaceful protestors that were marching for equal rights and protections for minorities last month near the courthouse could very well be literally tracing the steps made many years ago by abolitionists leading slaves to freedom.