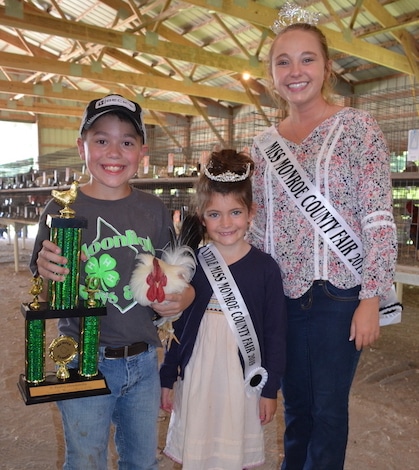 The 72nd annual Monroe County Fair is set to be a highlight of summer once again, with the annual event running July 21-28.

“I’m expecting a big week,” Monroe County Fair Association President Don Schrader said. “Hopefully the weather will cooperate. A lot of people really look forward to the week, and I think with the rural community having the challenges with their planting season and water levels, they’re going to be looking forward to a week to enjoy a little time off.”

The fair will be much the same as last year, though the Maeystown Fire Department is organizing a bags tournament on July 28. Anyone can sign up for that new event, which starts at noon.

The fair association has also added a new pavilion near the existing beer stand called the bandstand. Additionally, it is experimenting with air conditioning in the commercial building this year.

Other than that, the fair is basically the same as in 2018.

The festivities began Sunday with a junior class horse show, 4-H horticulture and crop judging and a Kloepper card tournament.

The Little Miss and Monroe County Fair Queen pageants capped off the day.

On Monday, there was judging of poultry, ag products and fine arts, rabbits and sheep. Heavy rains overnight into Monday morning led to the cancellation of tractor pull events.

Throughout the livestock categories, Schrader said the number of entries is about the same as last year.

“We were a little concerned about that with all the water situations going on, but our 4-H and FFA programs continue to be very strong in the county,” he said.

July 23 featured a tractor driving contest starting at 11 a.m., an open class horse show at 6 p.m.,  a street truck pull at 7 p.m. and an antique tractor pull open to anyone at 7 p.m. Silverback and Pick’n & Grin’n will close out the night with music from 7-11 p.m.

On Wednesday, the rooster crowing contest takes place at 9:30 a.m., followed by dairy judging at noon, a steer show at 3 p.m. and goat judging at 6:30 p.m.

Thursday will have free admission because that is HTC Customer Appreciation Night. Events that day include beef judging, a performance from the Bud Light Brigade from 5-8 p.m., the 4-H animal market auction at 6 p.m., a senior class horse show at 6 p.m. and a performance by Well Hungarians at 8:30 p.m.

From 6-11 p.m., individuals can also purchase carnival armbands for $22 to ride as many rides as they want.

Friday will start slow with no morning events, but things get more exciting at 7:30 p.m. with the auto demolition derby. Boulder Dash will also perform from 8:30 p.m. to 12:30 a.m. at the bandstand.

Saturday will include a heavy horse show and open class mule show at 9:30 a.m., along with a pedal pull and sand castles and animal sculpture activities at 11 a.m.

That evening will feature another ITPA truck and tractor pull at 6 p.m. and a performance from 3 Amigos at the bandstand from 8 p.m. to midnight. Admission costs $15 after 2 p.m.

The fair finishes up July 28 with mini horse and mini donkey judging at 10:30 a.m., a garden tractor pull at 11 a.m. and an appearance by the Thunder and Lighting Cloggers at 4 p.m.

The evening will also include another carnival armband night from 4-9 p.m. and FFA Fun Night activities starting at 6:30 p.m.

Admission is free again on Sunday.

While there are fun events each day of the fair, Schrader pointed out a few highlights.

“You wouldn’t want to miss the super stock tractor pull on Saturday night, for sure,” he said. “Also, the demo derby and Figure 8 race will be very competitive and we expect lots of entries for those. Also, we have live bands. HTC Night is on Thursday night and Well Hungarians are playing for that.”

Season passes for the fair cost $40, while exhibitor passes cost $35 and advance tickets are $2 each,

For more information, go to monroecounty-fair.org.