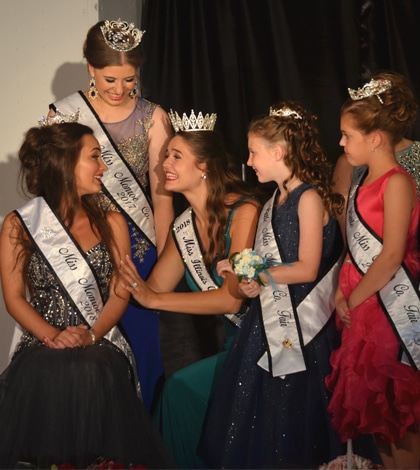 For the first 12 years of its life, the Monroe County Fair did not include what is now one of its main attractions: the fair queen pageant.

That event did not start in the county until 1959, the same year the state began a Miss Illinois County Fair competition.

At the start, the contest was run by a committee comprised of Norman Beck, Edd Kueker and Robert Thier.

Those men stepped down from those roles in 1962, but no one stepped up so there was no pageant that year.

The next year, the Jaycees organization took over running the event before turning it over to Judy Edler and Vera Stumpf.

Edler ran the pageant until 2005. Since then, Leslie Gummersheimer served for two years as pageant director, a role filled for the last decade by Yvonne Dehner.

Throughout those changes in leadership, the event has remained both fun and beneficial to young women in the county, in part because the contestants are expected to know a little about agriculture and be involved in the community, Dehner said.

“The girls now have a lot more accessible to them and the scholarships they’re getting and the careers they’re pursuing are so different,” Dehner said. “I think a lot of that comes form having the chance to compete here and at the state level.”

Winners, especially, learn from their year as fair queen.

“Many of them, I see self-confidence levels changing,” Dehner said. “Many of them don’t have an ag background, so it’s a learning experience.”

Queens past and present agreed with that sentiment.

“I’ve gained a lot of public speaking experience,” 2018 queen Belle Plew said. “I definitely have become more comfortable talking to people and talking with people. It’s kind of prepared me for the future, especially with my major.”

The 18-year-old Columbia student is planning to attend Bradley University to study public relations and advertising with an emphasis in journalism.

1988 queen Julie Roy (nee Burton) said something similar, as she won fair queen at 18 before going off to college.

It seems most queens are not thinking about those benefits when they find out they win.

Instead, they are shocked.

“You think they made a mistake,” inaugural queen   Barbara (nee Andres) Meyer said. “At that age, you think they didn’t see right or something. It’s humbling.”

“I guess I was overwhelmed a little,” 1960 queen Janice Sue (nee Sanders) Callahan agreed. “I had no idea what the responsibilities were.”

Those responsibilities vary, but they include being present at dozens of community events, representing Monroe County at the Illinois State Fair, traveling to other county fairs and more.

“People don’t understand that even though the fair’s only one week, the job as the fair queen is the whole year,” Plew noted.

For some, however, that first week is the sweetest.

Roy said her favorite memories of her reign are from fair week.

“I still remember all  the kids with their animals and everybody who competed in the different events,” the Waterloo resident said. “My favorite part was just getting to meet everybody involved with the fair.”

“I really enjoyed being fair queen because I would present all of the ribbons,” she said. “And then I enjoyed representing Monroe County at the state contest in January. That was interesting, going and meeting all of the other fair queens.”

Plew said she also enjoyed that aspect of being queen.

“I really liked being a good representative of the county and going to all the events around Monroe County and being able to talk to people,” she said. “Having everyone be a friendly face around the county is so rewarding.”

On Sunday, however Plew will retire and give another young woman that opportunity.

She will be the 60th fair queen because – despite there being no pageant in 1962 – 1968 fair queen Donna Schnittger relinquished her crown to runner-up Angela Gillat after the former got married.

To celebrate its anniversary, the Monroe County Fair Pageant Committee is looking to have as many former queens as it can onstage at this year’s pageant.

The committee is asking for the community’s assistance in locating former queens.

Although this year’s contestants are already set, past queens all encouraged girls to compete when they can.

“Win or lose, it’s a lot of fun,” Roy said. “It’s a great experience. You make a lot of friends. You meet new people.”

“It does build confidence,” said Andres, who now lives in Kirkwood, Mo.
“There’s a lot of press about young girls and if they should get into these things, but for the confidence-building and public speaking, it’s really good.”

“It has benefited me in so many ways,” Plew agreed. “It’s the most rewarding experience. In my opinion, it’s the best job I could have asked for for a year. It’s something that no one can take away from you. You always have that title. And if you don’t win, run again.”