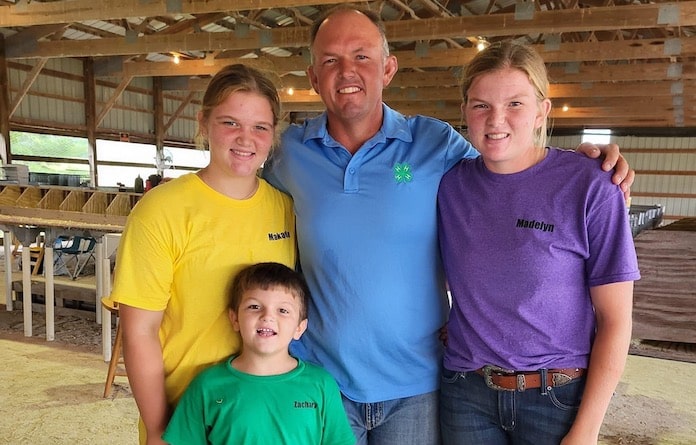 This year’s Monroe County Fair Farm Family Award went to Michelle and Randy Gummersheimer along with their children Madelyn, 16, Makayla, 13, and Zachary, 5.

Though Randy said he no longer participates in the fair’s annual demolition derby as he used to, the family still participated in much of the fair’s events this year – particularly animal judging.

Showings the Gummersheimers participated in this year at the Monroe County Fair included rabbits – earning several best of breeds – along with poultry and sheep, Makayla earned a fifth place ribbon with one ewe.

The family also had a heifer which, quite unexpectedly, gave birth to a calf at the fair.

Randy and Michelle said a lot of work goes into the family’s fair participation as the animals they display are all raised and cared for by them.

“The kids are busy. It’s busy. It’s a lot of work, and the kids do it all year,” Michelle said. “It’s kind of a reward to show everything because they work all year for the fair, I guess you could say.”

Randy said the fair has been a Gummersheimer tradition since he was young.

It’s become an annual highlight for the daughters, and this was another good year for the family.

“Overall it was pretty good,” Randy said. “I mean, we pretty much did the same as we normally do.”