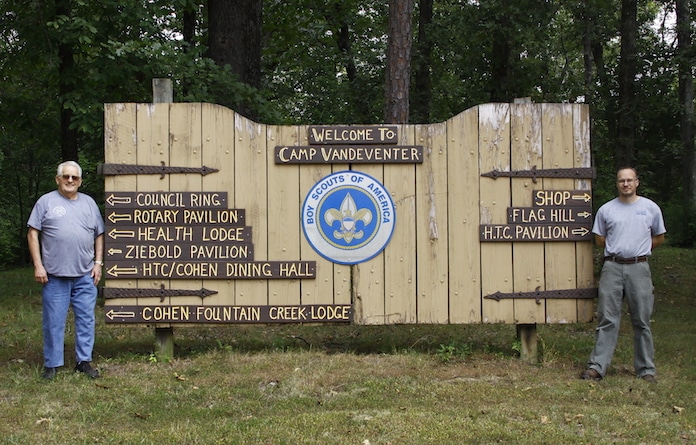 After 100 years of providing camping, leadership training and memories for Boy Scouts and Girl Scouts  in the area, Camp Vandeventer at 3464 Trout Camp Road in Waterloo will close.

The Greater St. Louis Area Councils voted Friday to end operations at two of the campgrounds in the region. They will sell the  Camp Vandeventer property and end their lease of the Camp Joy grounds in Carlyle.

Matt Branson, who has been the full-time camp ranger at the Waterloo site for the past eight years, said that “no timetable” has been set for the sale of Camp Vandeventer and that the council will focus on Camp Joy first as they will only need to revert ownership to the original landholders.

Ken Jackson, who was camp ranger at the grounds for 16 years, said “I hate to see it,” adding he suspected the future of the camp was in jeopardy when the Lewis & Clark Council merged with the St. Louis councils in 2017 as a cost-saving measure.

The merger came only eight years after financial concerns led to the creation of the Lewis & Clark Council. The council was formed in 2009 when the Okaw Valley Council, which oversaw operations at Camp Vandeventer, merged with the Trails West Council.

The Boy Scouts of America woes continued when they filed for Chapter 11 bankruptcy in February in response to declining membership and lawsuits against troop leaders and volunteers alleging sexual abuse.

The bankruptcy did not affect regional councils such as the Greater St. Louis Area Council since they are legally and financially separate although they operate under the BSA umbrella.

Jackson said Boy Scouts is still a “good organization” and “there are still a lot of good scouts out there,” even though, as with many entities with a large membership, the public usually only hears about the bad ones.

There were many good ones that had the opportunity to camp at Camp Vandeventer in the past century, including the Voris family, founders of the newspaper now known as the Republic-Times.

Former R-T editor Bob Voris produced a booklet in the 1990s about the history of Camp Vandeventer. He returned to the camp nearly every year to photograph the Birdfoot Violet, a two-toned purple flower that was introduced to Voris at the campgrounds in 1944 when he was a camp staff member.

The camp name referred to Hidden Hand Cave, which located near Fountain Creek and runs through the grounds. The cave is purported to have had a formation that resembled a human hand.

The land where the camp was established was a popular picnic spot in the late 19th and early 20th centuries near a man-made dam on the creek. A mill had been constructed by early Illinois pioneers to utilize the water flow from a spring near what became Fountain Creek Lodge at the camp and the dam that was about a half mile upstream.

Various swimming locations along Fountain Creek were also a draw. One became known as the “Old Swimming Hole,” a popular summer spot for campers throughout the last century.

The area also offered the opportunity to explore and find Native American artifacts. Local farmers in the area referred to it as “Indianer Buckel,” German for “Indian Hill,” because of the various arrowheads and  items left behind by Native Americans who once lived on the land.

The grounds feature a geographic oddity as well. The creek runs both above and below ground and one vantage at the camp offers a view of the water exiting a rock formation at one opening, traveling over a creek bed for about 50 yards before returning to its underground course.

The popular hangout became a Boy Scout camp after land owner Fred Nobbe Sr. agreed to lease the land for $25 a month in June 1920. That July, a truck showed up with supplies for 50 “pup” tents and a large “mess” tent. The supplies were taken to the campsite via horse-drawn wagon because no road to the site existed at that time.

From Aug. 14 through Sept. 4, the first camp was held and featured signaling, woodcraft, astronomy, geometry, botany and a purpose to “develop the kind of character in boys that goes with the finest American citizenship,” according to an article about the camp’s opening in the East St. Louis Journal.

In its second year, it was known as Camp Mannaseh, meaning “man builder” according to a July 1921 article in the Waterloo Republican.

The 1926 camping season saw two firsts for the camp. One was the first two weeks of the camp season belonging to the local Girl Scouts. The other was use of the camp for a week by African-American scouts.

In the first years of the camp, inclement weather, flooding and other situations arose that could not be effectively addressed unless the scouts owned the campsite land.

The problem was remedied in April 1928 when East St. Louis City Judge Wilton M. Vandeventer purchased 67.9 acres of land where the scout camps had been held.

In November of that year, he donated the land to the East St. Louis Council with the stipulation that it be known as “Vandeventer Camp” and that the “title be vested in the County of Monroe” and used as a park should the scouts “fail to function or not have a successor legally constituted to carry on the work for which it is now organized.”

That clause will now be tested as the local council has decided to not use the property – which has expanded to 167 acres – in the future.

Dave Chambliss, the Greater St. Louis Area Council, BSA Director of Marketing, said it was a “hard decision” to close Camp Vandeventer and that the scouts will honor any language in the deed when it sells the property.

Chambliss explained that with the 2017 merger, the council was operating eight camps. As part of the strategic planning, which is revisited every year, it was determined that continuing the Vandeventer and Joy camps were not economically feasible moving forward.

“The history of the camp is awesome,” Chambliss said, adding the decision was ultimately “based on attendance.”

Branson, whose family has a rich scouting history, said attendance has been down at the camp, especially during the past summer when COVID-19 restrictions canceled many events. He said most of the camp use in recent months has been weekend camping with groups of 10 or fewer.

The campground has experienced many changes throughout its 100 years of operation, such as the construction of a concrete pool in 1938, various structures and activity centers built and remodeled and, lately, a decline in use.

One thing that remained constant was the support of the community, whether through donations from businesses like Harrisonville Telephone Company or civic organizations including local Lions and Rotary clubs and untold hours of volunteer assistance.

Jackson said it took “a lot of volunteer work to keep (Camp Vandeventer) going” and he would like to thank “all of them who helped out there through the years.”

The decision to close the camp does not take away the memories of scouts, camp counselors, volunteers and anyone else involved with Camp Vandeventer.

Depending on who purchases the property and what it is used for in the future, it may be the beginning of a different set of memories for the next generation of Monroe County campers.