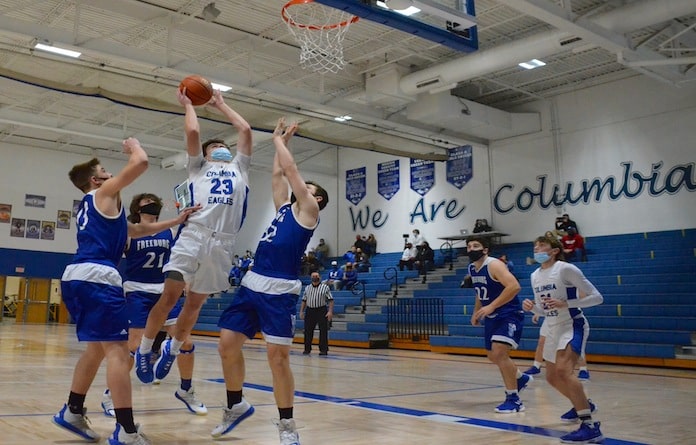 The Columbia High School boys basketball team opened its season with a 55-45 win at home Thursday over rival Freeburg in a game that was much closer than the score indicates.

The teams battled close throughout the contest, with the Eagles up 23-22 at halftime. With Freeburg up 22-20 in the final minute of the first half, Columbia’s Glenn Powers made a pivotal three-pointer to give his team the slight edge going into the locker room.

Both teams scored 15 points in the third quarter, with Columbia again coming up with a key play at the end of the frame. Eagles senior Jackson Holmes was fouled on a three-pointer and made two of three free-throws to give his team the 38-37 lead entering the fourth quarter.

A lay-in basket by Powers finally gave the Eagles some breathing room at 45-40 with 4:38 remaining in the contest.

Holmes led the way for Columbia with 17 points and 11 rebounds. He was 11-for-13 from the free-throw line.

In contrast, Freeburg went just 10-for-27 from the charity stripe as a team in the game.

Columbia shot 59 percent from the floor and 17-for-24 from the free-throw line.

For more photos from Thursday’s game, which are available for purchase, click here.