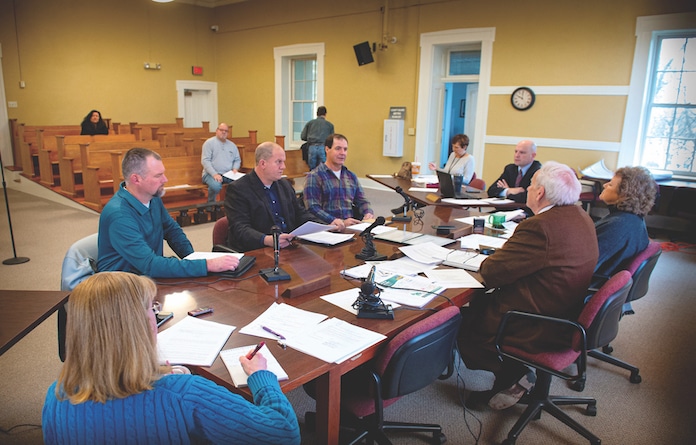 The final hour of Monday’s Monroe County Board meeting was devoted to the coronavirus, with the board approving two measures related to the virus and hearing the latest.

The board OK’d a measure called the Health Department Emergency Preparedness and Response and Communicable Disease Control Quarantine Rules and Regulations.

That outlines how quarantines of people with COVID-19 will work in Monroe County should that step become necessary.

Monroe County Health Department Administrator John Wagner would have the authority to impose a mandatory self-quarantine for 48 hours, during which time the county will attempt to get the person to agree to a voluntary 14-day quarantine.

If the sick individual does not agree to that or wishes to appeal it, the rules and regulations lay out a court process for that.

“This is very unlikely,” Wagner emphasized. “It’s not happening across the country.”

The rules and regulations must now be passed by the Monroe County Board of Health.

A quarter of that will go to local school districts, which are closed at least through March 30, to provide for Monroe County student welfare issues. Wagner said the Waterloo and Columbia school districts will each receive $10,000, while Valmeyer will get $5,000.

Parochial schools can contact the health department as needed for funding.

The rest of this money is currently not earmarked.

“We are in a better position than most counties to respond to this locally because of our county board and our board of health being fiscally responsible in the past,” Wagner said.

Conversely, Wagner slammed Gov. JB Pritzker for his handling of the situation, specifically taking issue with Pritzker criticizing the federal government when Illinois has its own problems.

“(Pritzker) should be more worried about what’s going on in his state than how well the federal government is conducting themselves,” Wagner said.

“It helps nothing to make this thing political,” he added. “He did a big disservice to the state by making this political, and it forced me to respond in a political way.”

Wagner said it recently took his office over three hours to get state approval for a basic item. He said it took Randolph County over a day to get that same measure OK’d.

Similarly, Wagner said the state never notified his office of people returning to the county from high-risk areas like it said it would.

Those people, two students who recently studied abroad, self-reported and are voluntarily quarantined as a precaution but currently show no symptoms.

“These two families have done everything and more as far as we’ve asked with the quarantine,” Wagner stressed.

Wagner also said the state promised to send personal protective equipment to the health department last week, but it did not arrive.

Scheibe then reported that equipment will not be coming because the state found most of its stockpile is expired or damaged, as was the case with many items sent to other health departments.

“They implement these rules and they don’t follow them themselves, and now we have a shortage of equipment,” Koerber said of the state.

Wagner also cleared up confusion regarding COVID-19 testing, saying the tests are not kits but “lab-performed tests.”

“There’s an adequate number of test kits to test the people that are needed, especially in our area,” Wagner said.

For his part, Davis explained to the board in more detail what the county’s schools are doing.

The two weeks the schools are closed are considered “Act of God” days  under state law.

Those days do not need to be make up, services do not have to be provided, staff cannot be mandated to work and no educational services can take place in the school.

While that is the case, Davis said every teacher will get paid without working and schools will get all the money due to them. The same cannot be guaranteed for paraprofessionals like cafeteria workers and custodial staff and bus drivers.

Davis also said schools are working to provide food for Monroe County students under 18 and provide educational support during the school closing.

But that work cannot be mandated or graded, so the goal different than in normal circumstances.

For more on the coronavirus pandemic, read our other stories on the front page of this week’s paper.