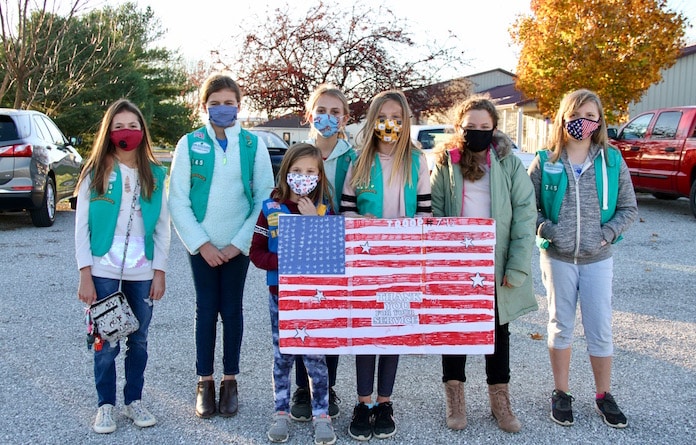 While the COVID-19 pandemic prevented Monroe County from honoring its veterans in the ways it normally does on Veterans Day, residents still found safe ways to remember and show appreciation for those who have served in America’s armed forces.

Waterloo’s services fell into that first category, as local photographer and videographer Curt Simshauser partnered with the city like he did for Memorial Day to create a virtual program.

The 35-minute video included the playing of the National Anthem, the saying of the Pledge of Allegiance, a performance of “Grand Old Flag” by Ss. Peter & Paul Catholic School students, prayer, the recitation of a poem by Gibault Catholic High School student Nick Chambers and a rendition of “God Bless America” by the Gibault Hawkappellas.

Its focus, however, was on honoring World War II veterans because 2020 marks 75 years since the end of that war.

“They are at the twilight years of their lives, and it’s very important that we remember them,” Waterloo Mayor Tom Smith said of those veterans. “I think it’s important to remember our WWII veterans for the freedom they gave us. When the lights were going out in Europe, they said ‘not on my watch.’”

Among those honoring people who served during World War II was Angela Ochoa, a colonel serving at Scott Air Force Base who thanked veterans for paving the way for people like her who are currently serving in the military.

“I will never fully understand the personal sacrifices, bravery and commitment our Greatest Generation made,” Ochoa said. “Many of our World War II veterans left home for three or more years, not knowing if they would see their families again. Their spouses and children also sacrificed. The entire nation came together for the good of all. What an amazing example for us today.”

The main feature of Waterloo’s program was interviews with several residents who served or had loved ones who served during WWII.

Veterans of that war who spoke were Roy J. May, Harold Hirstein, Syl Goessling, Howard Ludwig and Lucy Engbring, each of whom talked about some of their memories related to the war.

Engbring recalled how she joined the Marine Corps during the war after being in college for about three years.

She was stationed in North Carolina and told how she remembered her fellow servicemen and women crying when they were deployed or when they won a major battle like the Battle of Iwo Jima.

Like Ochoa, she fondly remembered the unity of the nation at that time.

“I’m just so thankful for all the veterans,” Engbring said. “They worked for us. They took care of us. That is the one time in my life that I can remember that everybody in the United States was on the same page. They all worked together, and they got so much done.”

Unlike Engbring, other speakers even served overseas during the war.

Goessling, who went to France and Germany as part of his service, described some of the less-than-stellar food he ate and experiences he had.

Even with the difficulties involved, Goessling looked back positively on his service.

“That was the best thing that ever happened to me, getting drafted,” he said. “You grow up in a hurry.”

Waterloo also held its traditional laying of the wreath ceremony at Lakeview Park on Veterans Day.

In Columbia, the spotlight was on those who served in the war immediately after WWII: the Korean War.

A few dozen vehicles worth of people gathered for the drive-in ceremony at the Columbia American Legion Post 581’s parking lot.

Greg Smith, commander of Post 581, used a radio broadcast to tell those assembled about how the Korean War, which began 70 years ago this year, is often referred to as The Forgotten War.

“We’re here to remember. We’re here to honor not just those brave Korean War veterans, but all those who have served in the military since our country’s founding,” Smith said.

Smith said the Korean War, like the Vietnam War after it, can be a controversial one, but that should not reflect on those veterans.

“Regardless of how one feels about policies that lead to war, let there be no doubt that veterans serve with honor,” he said. “They serve to make life better for others. They preserve our freedoms.”

Smith further spoke about how many veterans may not bear physical scars from their service but still deal with trauma and mental health issues related to it.

He said the best way individuals can help those people is by showing gratitude.

“Tell veterans directly that you love them, that you appreciate them, that you are grateful for their service,” he exhorted. “It’s up to us to ensure that every veteran feels that his or her service to this country is appreciated by fellow Americans. There are many tangible ways that we can acknowledge their sacrifice, but the easiest is to simply say ‘thank you for what you’ve done for our country.’”

Other elements of Columbia’s service included the posting of the colors, saying the Pledge of Allegiance, playing of the National Anthem, a prayer, remarks by Columbia Mayor Kevin Hutchinson, a speech about the civilian casualties of war by Auxiliary Unit 581 President Janet Janson and recognition of the 50 years of Legion membership of Edward Seabaugh and Gene Henckler.

The smallest Veterans Day service in Monroe County was in Valmeyer – though that was by design to keep the event as safe as possible.