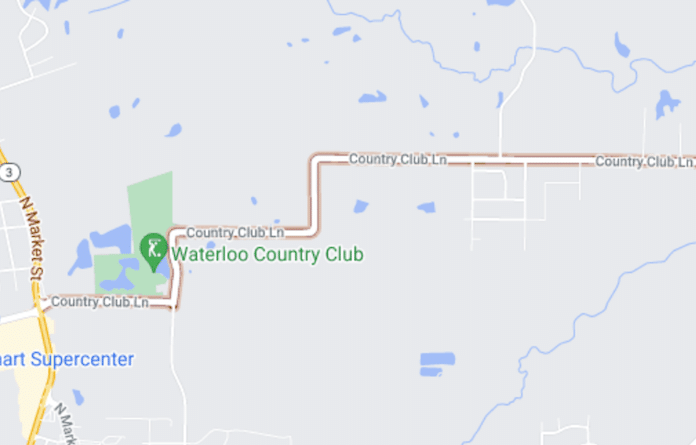 Concerns over the condition of Country Club Lane by City of Waterloo residents who travel on it regularly took center stage during Monday’s Waterloo City Council meeting.

Tim Holmes and Jordon Riley spoke on behalf of city residents who live in subdivisions off Country Club Lane, which is mostly a county roadway maintained by Road District 2 and not in city limits.

Riley and other residents similarly approached the Monroe County Board with this issue earlier in the month and were told to pursue a cooperative effort between the city and county.

Holmes said the issue is the condition of Country Club Lane east of Waterloo Country Club.

“The road has seriously degraded throughout the last couple of years that my wife and I have been residents, and I know that there’s others have been residents back there way longer than us,” Holmes told the council. “It seems that it’s going to continually degrade from a lack of maintenance. I understand this is a county road. I get that. I’m asking you guys to work with the county and see if there’s a resolution that we can come up with or you guys can come up with to do something better with that road.”

Holmes said it is a safety issue and just a matter of time before something tragic happens on that stretch of roadway.

“I’ve almost been hit numerous times, head-on, from individuals swerving to miss potholes. I know that there’s individuals who have had suspension issues, car issues, just from the lack of maintenance from that road,” Holmes said. “We’re worried somebody’s going to die out there.”

Holmes pointed out the City of Waterloo has trucks drive on the road to the city’s wastewater treatment plant. He added that traffic has increased as more homes are built.

“That road right now is built as a very rural road. It is a tar-and-chip road that can’t hold up to heavy traffic – much less heavy equipment that’s coming out there for new house building or out to the water treatment plant,” Holmes stressed.

Alderman Steve Notheisen asked the concerned residents if they have brought up this issue to Road District 2 Commissioner George Gregson.

Holmes replied that they have, but the response is that the road district doesn’t have funds to make upgrades.

The city residents who live in the subdivisions off of Country Club Lane pay taxes to the city, not the county or road district in question.

“We are a city resident, but we have to take a subpar road to our houses,” Holmes said. “Waterloo as a whole is growing, much less our subdivision. We want to feel represented, and we feel like we’re not. We feel like we are not getting anything out there. We have to take this road, and everybody points the finger at somebody else.”

Riley told council members that “if you question (these concerns), drive down it twice a day and see how it works.”

“If you lived down there, you’d very quickly be on our side,” Holmes added.

Notheisen said the problem facing the city on this issue is that it can’t spend money on a county road.

“I don’t know if the road commissioner is being up front with the situation,” Notheisen said. “He should have money to fix that road.”

Gregson did not respond to a request for comment for this article by press time.

Notheisen said the residents could put pressure on the road district to address the matter.

Waterloo Mayor Tom Smith told the residents they could propose a special tax district to raise money for road improvements.

“That is ridiculous,” Riley responded. “That is asinine right there! That is not the way to go. We spend enough in tax dollars already, and you guys want us to spend more?”

“I’m just telling you you could do that,” Smith replied.

The men told the council that the city should have done a better job of planning for future growth when it decided to annex these subdivisions into city limits.

“We did question that road going out there, but it was before our time,” Smith replied.

Holmes asked if the city could annex the roadway, to which Smith replied that all of that land would need to be annexed and would be a difficult process.

Smith said he is willing to talk with the county commissioners on the issue, but he “may not have a good answer” to give the homeowners.

“In the next year it’s not going to go anyplace because everything’s on a budget, and there’s no money in our budget to fix that road,” Smith said.

Ward IV Alderman Clyde Heller, who represents the concerned residents, said the road district commissioner has some questions to answer.

“I think (Gregson) owes everyone an answer to the question ‘Is he spending the same amount of money on the two miles distance from Country Club Hills to the city limits, from city limits to city limits, as he is from the farthest-most part of the road,’” Heller said.

“It is a county road that has three sharp ‘S’ turns on it and the last one furthest east is totally deteriorating,” Posey wrote. “The conditions worsen when the fields around the ‘S’ turns are planted with corn. Visibility is very limited.”

Updating our article from last week on the Cornerstone Laine women’s facility, the Waterloo Planning Commission meets Wednesday night at 7:30 p.m. in the Waterloo High School auditorium to discuss the proposed recovery residence that would go in the former home of The Rosedale House at 228 Mueller Lane.

The Waterloo Zoning Board will then take up the issue Thursday night at the same time and in the same location.

The planning commission will work on a consensus definition of a recovery residence.

It will then vote whether to recommend the Waterloo Zoning Board of Appeals add that definition to city code.