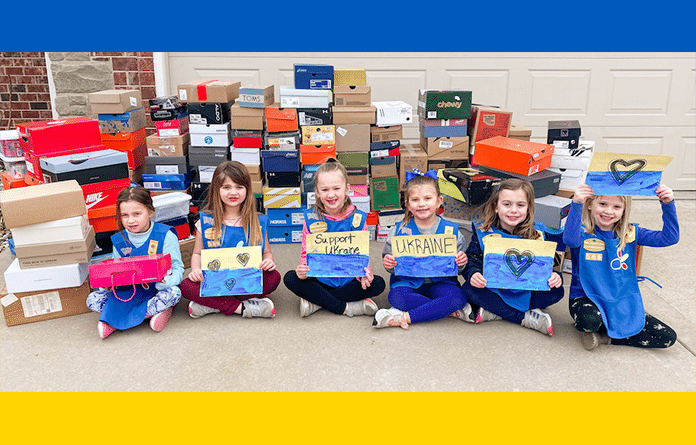 The scope of Russia’s invasion of Ukraine can be hard to measure. By the time death counts and displacement data hit the press, it seems they automatically need an update.

According to the Wall Street Journal, over 2.7 million people have fled Ukraine since Feb. 24 when Russian President Vladimir Putin began an unprovoked invasion. The majority of refugees are seeking safety in nearby Poland.

The troop collected gently-used or new toys, art supplies, books and more, placed them in shoe boxes and dropped them off at the RealtyOne location in Creve Coeur, Mo. From there, the boxes made their way to Poland, where Jewgieniew’s family is preparing to distribute them.

Mallorie Hejmej Weiser, one of three troop leaders and the mother of a scout in the troop, said she found the opportunity on social media.

With the help of Creative Kids in Columbia, friends, neighbors, coworkers and more, the troop collected 150 cheer boxes in five days.

Of course, the girls made some cheer boxes of their own.

“Many of the girls went through their own toys and donated to create their own cheer boxes. All 150 boxes were full of toys!” Hejmej Weiser said.

Hejmej Weiser said the boxes not only provided the troop with an opportunity to help – it also allowed leaders to explain the situation to them.

“We wanted to acknowledge that this can seem really scary to them and that we don’t have all the answers. Instead of being consumed with worry, we decided we could do something productive with our energy and help some of the refugee children find a bit of comfort, perhaps in the form of a simple toy,” Hejmej Weiser said.

Loo’s Little Listeners, an extension of the Waterloo Listens group for kids, also stepped in to help children thousands of miles away.

By making decorative door wreaths complete with yellow sunflowers, a long-standing symbol of peace in the war-ravaged country and blue accents – the other color in the Ukrainian flag – Loo’s Little Listeners is raising money for the Save the Children’s Ukraine Crisis Fund.

These proceeds will aid both children actively in conflict zones and those who have left their homes.

The organization estimates 2.9 million people in Ukraine are needing assistance, according to its website.

As of Monday, the Little Listeners have made approximately 60 wreaths by hand (with some adult help) and raised $1,400 for the relief fund.

“There’s war going on and we need to make sure we help,” said 8-year-old Jacob East, an active member of the group.

Sage Manning, another 8-year-old in the group, said she hopes kids in Ukraine feel this support.

“We’re here to help you guys and we hope that you’re able to stay alive,” Manning said.

The Little Listeners will meet soon to craft even more wreaths. Those interested in purchasing a wreath or getting involved can email looslittlelisteners@gmail.com.

Both Loo’s Little Listeners founder Linze Zarzeck and Hejmej Weiser said they hoped their groups learned that their age does not need to be a barrier to creating change.

“I think it is important to remind our kids that we can make a difference no matter how small,” Hejmej Weiser said.

Kids are not the only locals stepping up to support Ukraine. Jack Leadbetter joined thousands of others in a unique way to send money directly to Ukranians: booking Airbnbs even though they have no way of traveling.

In early March, the initiative blew up, with Airbnb CEO Brian Chesky tweeting in just 48 hours it put $1.9 million in the hands of Ukrainian hosts.

Leadbetter received a touching reply from his “host,” who was using Airbnb to rent an apartment in Lviv, a city in western Ukraine.

“Your support will go a long way here in L’viv. You’re providing housing for displaced people. Currently there is a couple from Kyiv in the apartment you ‘booked.’ You’re also helping me support my neighbors and the physical defense of our city, if it comes down to that,” the host wrote. “I’m also keeping a record of all our generous bookings during this time so I can give folks a credit on their stay, should you ever come visit L’viv after the war … if we’re still here.”

Kyiv, the capital of Ukraine, has suffered multiple attacks since the invasion’s inception, with a residential building being struck by what was believed to be a Russian missile or rocket Monday morning.

A Saturday report from The Guardian said at least 20,000 displaced Ukranians were seeking shelter in Lviv, as natives prepared Russian forces to reach their beloved home, from making army attire to systematically placing obstacles at entry points.

The need for this “physical defense” the host was referring to may be nearing, with fears of more casualties growing.

Yet, as Zarzeck said, Americans are not completely unable to help.

“Even though it feels like it’s on the other side of the world, there are things that we can do right here in our community to support them, to spread awareness, to come together in solidarity and really show our youth that we can make change,” Zarzeck said.