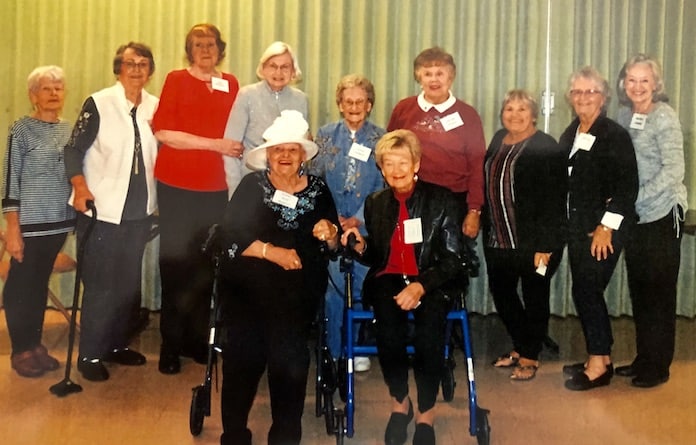 There are few groups in Southern Illinois that carry as long a history as the Columbia Woman’s Club.

A group founded and supported by local women, the local non-profit has been a staunch supporter of the community for over 100 years and has no plans of stopping its philanthropic goals.

The club was initially founded in 1922, when civic-minded women joined with local science teacher Beulah Hampson to organize and facilitate a women’s club.

They prioritized volunteerism and service and worked to better their community with friends from nearby Waterloo. The club would go on to sponsor Columbia’s first Girl Scout troop, as well as hire a county nurse.

The club was originally known as the Columbia Household Science Club. In May 1945, the name was changed to Columbia Woman’s Club.

When World War II began, the club didn’t avert its eyes from the violence and destruction overseas. Banding together in a show of solidarity, the club used its time and resources to support the war effort — sending bandages, milkweed pods and Christmas packages to troops at Scott Air Force Base and beyond.

The club was also responsible for the formation of Columbia Public Library after years of hard work. One of the club members, Jean Henderson, became the first salaried librarian.

The Columbia Woman’s Club now enjoys over 100 years of service, upheld by the commitment of its current and past members.

The organization prides itself in its long history and the projects it promotes today. One of the most prominent is its sponsored scholarship, allocated to a senior girl at Columbia High School. The scholarship not only helps fund the recipient’s education but also invests in her future goals and aspirations.

While the Columbia Woman’s Club’s work can be seen in the community, it provides a unique sense of support for the women within it. Internally, it is home to a thriving sense of community, facilitating life-long friendships and deep bonds.

For Darlene Cooley, a member of the club’s executive board, the community is the lifeblood of the Columbia Woman’s Club.

However, their friendship goes beyond weekly meetings and community events.

Many club members have lost their husbands, some due to illness, many to old age. As time passes, the members have found solace and comfort in the club’s warmth and understanding.

Wyona Crosley has experienced such firsthand and is thankful for the club’s mission to keep moving forward.

“I’m a realist,” Crosley said. “You live and you die. But with Woman’s Club, it gives you a sense of purpose.”

While many of the women are older, this isn’t a barrier for younger women who are interested in joining. The club welcomes like-minded women of all ages and walks of life, offering friendship and community regardless of background.

Today, the Columbia Woman’s Club is organizing a Glow Bingo event, in hopes to fund-raise for a new Columbia police K-9 unit. Despite the years, the women of this club continue to work in service of their community.

As a former member once said; “If you want to live to be old, join Woman’s Club.”