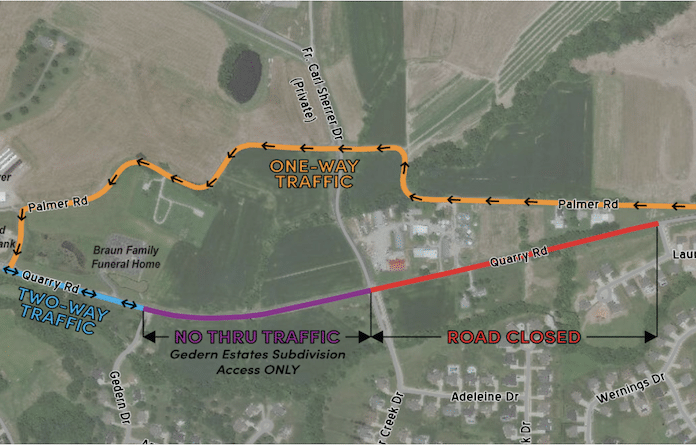 Smith says work will begin June 6 on a stretch of Quarry Road and expects a road closure starting June 13.

Quarry Road will be closed from Palmer Creek Drive east to Laura Court near Rueck Road.

Quarry Road will be open from Palmer Road to Gedern Drive, but will not allow through traffic from Gedern Drive east to Palmer Creek Drive. The section of road will be reserved for  access to the Gedern Estates subdivision only.

During the closure, Palmer Road from Rueck Road to Quarry will be a one-way street with traffic allowed only in a westerly direction.

The project will result in a roundabout at the intersection of Quarry Road and Palmer Creek/Father Carl Scherrer Drive, which connects to the entrance to Immaculate Conception Church/School.

At Monday’s meeting, Smith said details are being finalized, and the city will be in communication with residents about timing and other specifics related to the project.

In addition to having information in its Spring Columbia Quarterly newsletter, Smith said updates will be available through the city’s website and Facebook page as well as being reported in the Republic-Times newspaper and NEWS FLASH emails.

Letters will also be sent to the homeowners associations of nearby subdivisions such as Gedern Estates, Briar Lake Estates, Brellinger, Village of Wernings and others for distribution to residents.

Smith continued by noting the city had a “trial run” during construction in the first phase of the project, and the public should have a “reasonable expectation” of how the closure will impact traffic in that area.

In other road-related business, the council awarded a bid for pavement markings to America’s Parking in the amount of $18,116.12.

Smith explained the city experienced a rare occurrence by receiving matching bids for the project. The other company, which is providing pavement markings for surrounding counties, resolved the issue by voluntarily withdrawing its bid.

He said work had begun last Monday to create pickleball courts at Metter Park, with the project expected to be completed by the end of May.

Smith anticipates a public informational meeting for plans to expand the GM&O Heritage Trail to be announced within the next couple of months.

He also said he expected a January letting for the Carl Street bridge project, which had been scheduled to begin this summer. Preparations were delayed due to a recent production shortage of box culverts needed to complete the work.

Also at the meeting, Columbia Director of Community Development Scott Dunakey gave a department report focusing on the city’s approach to residential home inspections and issuance of occupancy permits.

Dunakey said the lightened workload comes at a good time due to current staff availability in his department.

Moving forward, Dunakey said the city will be taking steps to ensure a more consistent approach to pre-sale residential inspections.

He explained there have been instances over the past several years where the sale of homes has been delayed by requiring sellers to repair minor issues.

“We don’t want to hold up a sale from something aesthetic,” Dunakey said.

He also said he “can’t imagine” the city envisioning a 66 percent reinspection rate as the result of occupancy and building requirements.

By creating a standard document for inspections, Dunakey hopes to create a uniform checklist which help in “clarifying expectations” for home buyers and sellers as well as inspectors.

Columbia Mayor Bob Hill said the move was a “good step in the direction we want to go” in order to “move on with the sale and not have any questions” after inspection.

Dunakey continued by saying while inspections would still cover all areas, the focus for stopping a sale would be limited to “life safety” issues.

Brimm said the “biggest concern was looking at every (building) code as part of the process” and that the new system will give the city “discretion to work with homeowners.”

The city is currently researching purchase of mobile printers which would allow same day, on-site feedback for city inspections.

A copy of inspection requirements will also be added to the city website, giving home sellers the opportunity to address potential concerns prior to listing houses on the real estate market.

Dunakey was also asked about activity near the Red Roof gas station near Palmer Road and DD Road. Dunakey said there have been no permits pulled for construction, although he expects something to be submitted in the near future due to current land grading in the area.

Monday’s meeting began with a proclamation of the week of May 15-22 as Police Week and Emergency Medical Services Week in addition to Public Works Week.

The city will hold an open house at its Public Safety Complex at 1040 N. Main Street from 4:30-7 p.m. this Wednesday, May 18. Visit columbiaillinois.com for more details.