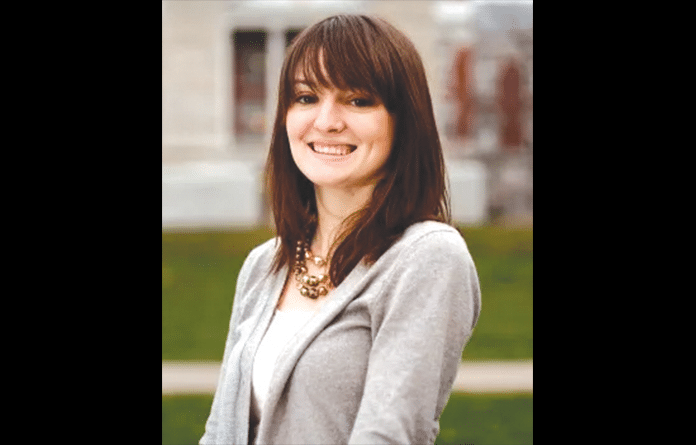 Anna Moeslein completed a momentous personal goal last year – just not in the way she expected.

After turning 30, the Columbia native decided she wanted to be a published author before she turned 35, so she wrote her first book in 2020.

But she wrote it for work while recovering from a car accident that put her in a wheelchair for 10 weeks and forced her to learn to walk again, all during the COVID-19 pandemic in New York.

“It feels incredible,” Moeslein, a Columbia High School graduate, said of completing her goal. “I thought it might be for a personal project, not a book associated with work, but it did happen. I feel grateful. It sort of scared me and intimidated me, but I achieved it and it’s done.”

Moeslein is the senior entertainment editor of Glamour, and it was in that role that she was tasked with writing “Glamour: 30 Years of Women Who Have Reshaped the World.”

The magazine wanted to publish that coffee table book to commemorate the 30th anniversary of its Women of the Year award in 2020.

“It celebrates women across all industries,” Moeslein explained about the award. “There are celebrities and politicians, but also scientists, astronauts, activities — women who are making a real difference in the world.”

In February, the publication’s editor in chief asked Moeslein if she would handle writing the book because she was already working remotely, focusing on projects more than day-to-day assignments as she recovered from her injuries.

Another reason for Moeslein getting this assignment is her experience.

A University of Missouri graduate with a degree in journalism, she got her start writing articles for the Republic-Times while home from college in the summer.

Moeslein then used that experience to help land an internship at Glamour in the summer between her sophomore and junior years.

After graduating from Mizzou in 2011, she moved to New York without any job prospects, trusting she would find employment. She did, getting hired at a celebrity gossip website.

During that time, Moeslein stayed in contact with her former editors at Glamour and was soon hired as a full-time assistant editor at the publication.

She has been there more than eight years, now overseeing all celebrity and pop culture coverage.

“I’ve been fortunate to get a few promotions in my time and grow my career here,” Moeslein said. “Media, especially in New York, typically has a high turnover rate, so I’ve been very fortunate to be here as long as I have and be able to grow and challenge myself here.”

She is now one of the most senior employees at the magazine, and her experience proved beneficial with getting this assignment.

Few other staff members could boast they have been to eight Women of the Year awards ceremonies, for example.

“It’s cool to be at these awards and see someone like Lady Gaga really fangirl over like the activist in the room,” Moeslein shared. “Those are the people they’re excited to meet and starstruck by.”

Once she got the book assignment in February, Moeslein began researching it in March. She read every profile the magazine had written about winners, watched every ceremony and transcribed every speech over about two months.

She then presented her recommendations for who should be featured in the book.

“What I was looking for was women who have gone on to do incredible things even after they got their WOTY,” Moeslein said. “We honored Nancy Pelosi before she even became Speaker of the House and we honored Kamala Harris, and she’s VP two years later. There’s moments like that where there’s more stories to tell.”

She also singled out people with incredible stories who were not as celebrated and speeches that were inspirational and timeless.

The next step was meeting with the art team to determine what photos and artwork would be in the finished product. The group had two main criteria.

“It was a mix of what visually was impactful because a key to this was beautiful photography and who had amazing stories to tell,” Moeslein said.

Moeslein also began writing the book around this time, along with returning to her normal work responsibilities and completing physical therapy.

The book has three chapters focused on “changemakers and rule breakers,” “leaders and pioneers” and “voices and visionaries,” respectively.

For each woman included in those chapters, Moeslein wrote a profile using her own research, previous articles, and speeches.

Sometimes, that entailed interviewing award winners to write updated pieces and find out what they have learned since winning Woman of the Year.

Each chapter also features some entire speeches given at the awards ceremony, which Moeslein transcribed.

All that had the potential to be stressful, but Moeslein was able to manage it.

“There was a lot I was balancing at the same time,” she acknowledged. “What helped with this was, with the profiles, I would try to just put the pressure on myself to write one profile each day. You just kind of keep moving each day until it eventually all gets done.”

The book was largely written by late summer, though Moeslein had to make several revisions before it went to press late last year after Ruth Bader Ginsberg died and Harris got the vice presidential nomination.

Ensuring the book was as updated as possible helped it achieve its intent, which Moeslein said was for it to serve and inspire readers.

“I think it makes an amazing gift for young women in someone’s life, female coworkers or colleagues or a Mother’s Day gift,” she said. “That’s the goal for it is to live on someone’s coffee table or bookcase and have these great photos and profiles in it that you can share with a woman in your life who might inspire you.”

“Glamour: 30 Years of Women Who Have Reshaped the World” is now available at Amazon, Barnes and Noble and other book stores.