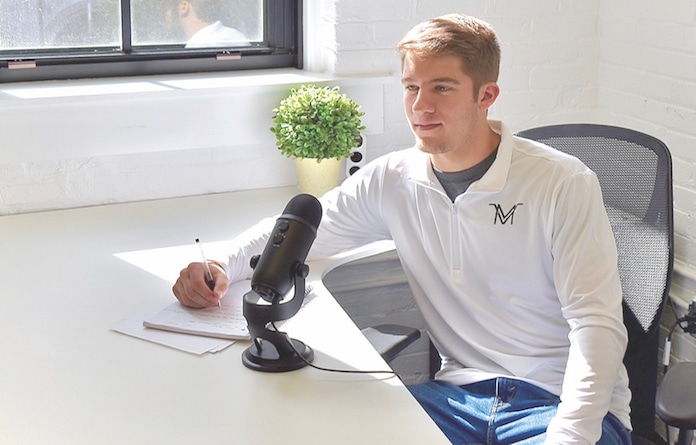 After winning the Monroe County startUP Entrepreneur of the Year award last year, Jacob O’Connor has shifted his focus to a new venture.

That is the Venture Mentality podcast, which he started last fall. A podcast is an audio file available for download online similar to a talk radio show.

On his show, the Columbia High School senior interviews various individuals about their experiences.

“The people I talk to are real people who have started these successful businesses, they have done great things for their careers, they have been Navy SEALs, Army Rangers or professional athletes,” O’Connor said.

The 18-year-old decided to try his hand at podcasting after working at an internship he received through the startUP program.

While working at that internship, O’Connor started listening to podcasts and  saw an opportunity.

“I thought it was really cool what people were doing, and I figured I might as well give it a shot,” he said.

Sixteen years later, Podtrac, the industry leader in podcast analytics, reports that 57 million Americans ages 12 and older listen to the hundreds of thousands of podcasts each month.

Seeing that opportunity, he decided to get started by making a website and deciding on what type of show he would like.

O’Connor said the most difficult part was simply getting used to hearing his own voice on the recordings, though he has become more comfortable with that over the 73 episodes he has recorded.

The format of Venture Mentality alternates. Episodes released on Monday and Friday feature O’Connor interviewing a guest, while Wednesday’s shorter episodes are only him talking.

He talks to those people either online or in person in St. Louis.

The episodes of O’Connor speaking on a topic for a few minutes are important to him, as he wants to be a speaker one day.

“I think I have good insights to share, especially being younger,” he explained. “I do have a sense of ignorance that reminds people of their childhood, and sometimes its good to go back to that form of thinking.”

In both episode formats, O’Connor aims to fulfill the several goals he has for the podcast.

As someone fascinated by what makes people exceptional and analyzing that, the show gives him an opportunity to do that while learning about various business models.

It also lets him have the opportunity to turn podcasting into a career.

Finally, the podcast lets O’Connor make an impact and help his listeners.

“I’m very legacy driven,” O’Connor said. “Whenever I die, I want to have been an inspiration and spark a change, whatever you want to call it. I want to make a difference.”

O’Connor’s chances of that have been growing as the show has. It mainly has North American listeners, but people in Australia, Spain, France and African nations have also tuned in.

The listener data is just one metric of success for O’Connor.

“Everything else has been going very well with it in terms of connections I’ve made, mentors I’ve received and opportunities that have come up,” he said.

One such opportunity is a entrepreneurship scholarship O’Connor received at Wichita State University, which he plans to attend in the fall.

“I feel like I wouldn’t have received that scholarship if I hadn’t been able to talk about my podcast in the essay that I wrote,” O’Connor said.

Additionally, O’Connor will be speaking in May at a banquet in New York City. That event is for the Hunter Brooks Watson Memorial Fund, which gave O’Connor a grant to grow his podcast.

Those curious about what has warranted O’Connor getting these honors can find the podcast for free on Apple, Spotify, Google or wherever they get their podcasts.

“It’s a source of entertainment, education and inspiration all in one,” O’Connor said.