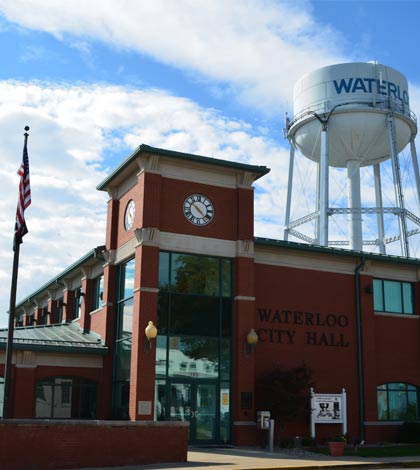 Although it was decided weeks ago during a committee meeting, the matter of who will serve as broker for health insurance available to city employees went to a full Waterloo City Council vote Monday night.

Following an exchange that was heated at times, the council went along with the previous choice by the insurance committee to go with CBIZ, a national consultancy with an office in St. Louis, over IPM, a local firm owned by Bill Wirth with an office in Waterloo.

The June 3 committee vote was 3-2 in favor of CBIZ. The council vote on Monday night was 5-3 against a motion made by alderman Steve Notheisen to reinstate IPM as broker.

Aldermen Clyde Heller, Jim Hopkins and Stan Darter voted in favor of CBIZ in committee and held firm with their vote at the council level on Monday.

Notheisen and alderman Russ Thomas, who voted against CBIZ in committee, voted in favor of IPM on Monday night, as did alderman Vicki Koerber, who is not on the committee.

Other aldermen not serving on the insurance committee — Rita Trantham and Gerry Frederick — sided with the prevailing committee decision in also voting against the reinstatement of IPM.
Monday’s meeting began with Wirth addressing the council about the recent change in brokers.

“Speaking to aldermen who voted for that out-of-state broker, the primary deciding factor to my understanding was not necessarily the health insurance but the promise of human resource services that they can include,” Wirth said, adding it is his belief the committee did not have enough details from CBIZ to have made an informed decision.

“I can provide written documentation of any question and any conversation within 24 hours,” Wirth added. “It’s not just a promise; I’ve shown (city finance director Shawn Kennedy) the client portal and talked about the HR services. You can now make a well-informed decision, I believe. I also believe it’s not too late – you can bring this business back to Waterloo.”

Wirth also criticized the committee decision as a negative sign for local business.

“What kind of message are we sending when the city of Waterloo leaders send over $1.1 million in premium outside Waterloo, outside of Monroe County, outside the state of Illinois? Before saying it’s not important, because I only earn three percent or $35,000, I ask, is it important to buy gas in Waterloo? Gas stations only make three or four cents per gallon.

“So before you say three percent is not important, I ask you to ask every business owner in town if it is. I think we know the answer.”

Wirth also said he negotiated an 18 percent increase down to zero, saving $198,000 for the city.

“The out-of-state broker did not earn the three percent; he is simply going to get paid for the work I did,” Wirth said.

The matter on Monday night’s agenda was to renew group health insurance coverage for the city’s 56 employees with Coventry, effective July 1.

Notheisen made that motion, with one amendment: to have IPM as broker. That amended motion was seconded by Koerber.

“This is not how to operate a business!” Waterloo Mayor Tom Smith said emphatically in displeasure with Notheisen’s motion.

“There was nothing Bill did wrong to lose the business,” Notheisen replied.

Darter classified Notheisen’s actions in proposing this amendment before the council as “sour grapes.”

Later in the back-and-forth discussion, Notheisen referred to CBIZ as a “shiny penny.”

Koerber said that IPM insurance went out and met the same extras that CBIZ is offering, swaying her vote in favor of Wirth.

“CBIZ has a lot more to offer than Bill,” Mayor Smith said.

Darter said the insurance committee voted in the best interests of the employees.

“I’m comfortable with the choice we made as the best choice for our current needs,” he said. “Future needs should be assessed as we move closer to the end of the renewal we just accepted.”

Wirth told the Republic-Times on Tuesday that Darter’s claim that IPM never gave the city options for a plan that improved benefits and saved money for the city and its employees was false.

“It’s not bad business to correct a mistake,” Wirth concluded. “Bad business is not correcting the mistake. It’s as easy to sign it back to me as it was to take it away and send it across the river.”

In other action from Monday’s meeting, it was announced that work will begin June 29 on the repaving of a portion of old Vandebrook Drive at Fieldstone Drive and Summerfield Drive that connects with the newly created roadway as part of Route 3 improvements.

The council also approved an ordinance Monday night requiring owners of property where methamphetamine was manufactured to abate or clean the property. The address of any home in the city which was found to have been involved in meth-making will also be included on a statewide computer database similar to a sex offender registry, Waterloo Police Chief Jim Trantham explained.

Finally, Koerber wished to remind residents that yard sale signs should be taken down immediately following an event.