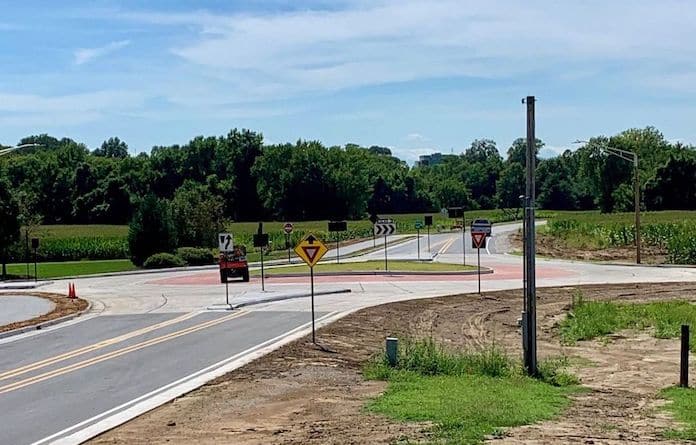 There was a smorgasbord of action and discussion items on the menu during Monday’s meeting of the Columbia City Council.

A common thread in much of the discussion involved roadways in the city.

Smith reported the roundabout project on Quarry Road was mostly completed and the roadway had been reopened Friday, meeting the goal of having the roadway accessible before the beginning of the 2022-23 school year.

Smith also gave an update on planned repaving and other work on Route 3 from Gilmore Lake Road to I-255, which had originally been planned to begin this month.

He said the Illinois Department of Transportation has awarded the bid for the project but has yet to set up a pre-construction meeting.

“More than likely, this fall all you will see is patching,” along with miscellaneous work at intersections and pedestrian crossings  or curb and sidewalk work with “significant paving work” not expected until 2023, Smith said.

Work may happen sooner than later on Veterans Parkway, especially with a plan in the works for a Jimmy John’s drive-through restaurant to be built on the north side of the street opposite the existing Taco Bell.

While a special use permit for Jimmy John’s was only a discussion item Monday, Columbia Director of Community Development Scott Dunakey included a traffic study of the area in his report to the council.

Dunakey indicated the special use permit for a drive-through at Jimmy John’s “will have negligible, if any, negative (traffic) impacts,” but also pointed out the study “suggests the addition of a two-way center left-turn lane on Veterans parkway would help maintain the flow of traffic” in the area.

“We need to get some pavement replaced on Veterans Parkway” along with Old Route 3, Smith said, adding the new traffic markings for a left-turn lane could be put in place when the larger project was in progress.

He expects expansion work on the GM&O Trail to begin in the spring, although he advised the council he would likely give a more detailed update on this walking trail at the Sept. 6 meeting.

Final plans have been submitted to IDOT for the Carl Street Bridge project. If the plan is approved and other preliminary requirements are completed, Smith said he could plan for a January 2023 letting at the earliest or June at the latest.

He added there’s still much uncertainty regarding availability of the box culvert that would be needed for the project.

Aldermen also approved support of an application for an IDOT Transportation Alternative Program grant which, if selected, would provide funding for the Creekside Park Trail Connector Project.

Dunakey brought another road-related issue, this one involving the parking of recreational vehicle and utility trailers along residential properties.

The city was notified of a potential code violation concerning multiple RVs and trailers parked in a driveway. Upon further review, Dunakey noticed no ordinance exists to “regulate the parking of such vehicles on private property.”

After a lengthy discussion of a draft proposal which outlined potential parking regulations, Dunakey will take council input under advisement and submit a revised draft at the next meeting for consideration.

The council also approved an ordinance which amends city code in regard to the total amount of licenses Columbia will issue to allow video gambling.

After discussion at the Aug. 1 meeting, Columbia City Administrator Doug Brimm provided a rationale about the limit of 15 licences to be issued – four more than are currently in play.

Brimm said he compared municipalities in surrounding counties similar in size to Columbia and found the average number of video gaming establishments per 1,000 population of the revised study area is 1.34.

Given the current population of Columbia is at around 11,000 residents, the number of projected licenses at that rate – 14.69 – would be 15 when rounded to the nearest whole number

The intent, Brimm said, was to “remove any ambiguity in the city code” regarding video gambling licensing.

A moratorium had been in place since July 2021 restricting the issuance of any new licenses.

The council also approved a collective bargaining agreement between the City of Columbia and Fraternal Order of Police Labor Council for the city’s patrol officers.

Brimm said the agreement “positions Columbia to be served as a preferred and desired employer” for those choosing a career in law enforcement.

“It is getting tough to get police officers as Chief (Jason) Donjon has mentioned to us before,” Hill added. “I think this is a step in the right direction and a good deal for everybody.”

Brimm gave the council an update on the city’s upcoming leaf collection program. The program was the subject of debate earlier this year after a series of communications with the Illinois Environmental Protection Agency about an alleged issued with one of the city’s leaf collection sites – a matter which is now considered resolved.

Brimm added he will be scheduling meetings with the IEPA bureau of land and bureau of water officials “to remove any sort of miscommunication or misunderstand that may be fostered by the separate approach we pursued this previous year.”

Once the meetings are complete, Brimm said he will bring tentative dates to the council for this fall’s city leaf collection program.

At the beginning of the meeting, Marla Rose was introduced as the city’s new community relations coordinator. Rose will in part fulfill the duties of Sue Spargo, who retired earlier this year.