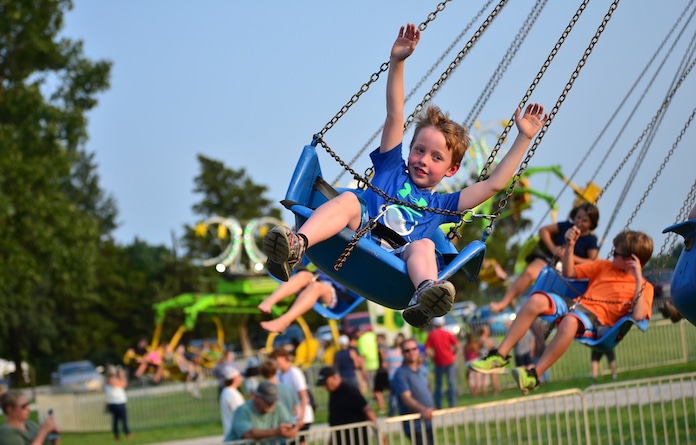 The return of the Monroe County Fair saw a record-breaking year, and organizers said it would not have been possible without the entire community being involved.

“The fair is how it is because of the volunteer help and the people in the community. It’s a community thing that makes it happen … (and) I want to thank the community for making it what it is,” Monroe County Fair Association President Don Schrader said. “That’s the key: It’s not the 21-person (fair association) board that does it. We couldn’t do it for a day without all the other help.”

According to Schrader, the 2021 fair was the largest Monroe County has seen in terms of attendance. While some may have worried the pandemic would have caused a drop in crowds, Schrader thinks it had the opposite effect.

“I think . . . people were wanting and willing to come out after missing the fair last year totally, and overall events were shut down and people just wanted to get out and socialize,” Schrader said. “I think that was one of the reasons why it was as large as it was, and I’m just glad we could do it.”

Some demo derby attendees set up blankets on the seats as early as 8 a.m. Friday, and the practice of saving seats became a contentious topic among some community members. With long lines closer to event times, some reported having trouble finding seats that weren’t already saved with items.

Schrader said as of right now, the fair board has not seen a need to address this.

“We don’t promote (saving seats), and we don’t really like it, but yes, it is done,” Schrader said. “I don’t think (the board) will really make an issue out of it unless it becomes an issue where people get upset with each other (to where) it will cause us problems. Otherwise, I don’t think we’ll get into that.”

The Youth Market Animal Auction, previously known as the 4-H/FFA Auction, yielded the most revenue it ever has. It raised over $170,000 total. Schrader said the auction included approximately 86 sellable animals, and each exhibitor got to keep the money their animal sold for.

This year’s food offerings saw some changes, yet that did not prevent food vendors from seeing their cut of a very successful fair.

“He was very well-received and delighted with all his sales,” Schrader said of Wienhoff’s pork stand. “It was a great fill-in for the Monroe County Pork Producers’ stand not being there. He only had two entrees – he just had pork burgers and pulled pork – but it went over quite well.”

This year’s livestock entries were down, which Schrader said was the only part of the fair that COVID-19 may have put a damper on. Participants had to register by June 25. In February, when competitors usually start preparing their animals, there was still uncertainty regarding the fair’s future.

“We were pretty sure by the end of May that we were going to be able to have a full-fledged fair, but up until then (we were unsure),” Schrader said. “You can’t go and get your animals purchased and in shape in a month’s time.”

This year’s largely-successful fair resulted from efforts on many fronts. In an effort not to forget anyone, and because it would take too long, Schrader did not list each individual, sponsor, fire department, police department and business that supported the fair.

He did make a point, though, to thank Human Support Services members who worked tirelessly to keep the fairgrounds clean. These individuals arrived at the fairgrounds at 5:30 a.m. during the week to make sure everything, including the restrooms, is spick and span. In addition to being paid for their work, these HSS members also get to keep money earned from recycling cans.

Schrader said the fair’s partnership with HSS has been going on for roughly three years and is especially rewarding.

“That’s the best thing we’ve ever done, get those folks involved in cleaning the fairgrounds,” Schrader said. “It’s been the greatest, (most) rewarding thing or those people who are doing it. (They) enjoy it so much. It makes them feel worthy and they’re just happy to do it, and it makes us feel so good that we can make them feel like they do. They’re very reliable, they do a thorough job and we couldn’t be happier with them! It’s just a win-win situation for everybody involved.”

From handing out trophies and ribbons to competing in events, 2021 Monroe County Fair Queen Alexis Mudd was everywhere last week, with this year’s Little Miss Alexa Moore in tow.

“She was the perfect one for it,” Schrader said, while musing how Mudd stunned the crowd in the pageant one night and was throwing bales of hay with the Waterloo FFA the next.

Of course, this year’s fair would not have been possible without the Monroe County Health Department. They and the fair board worked closely to ensure the safety of all, and Schrader said this partnership will continue next year if COVID-19 is still a concern.

“We’ll definitely plan to be doing it again next year if (COVID) is still around, because we don’t want to do anything that will affect the safety of the people and we’re very conscious of that; we don’t do anything to spread it or whatever,” Schrader spoke on working with the health department.

This year, the fair was missing some of its biggest individual supporters. The day before the fair commenced, longtime fair board member Mike Klein passed away. Schrader paid tribute to Klein on Sunday night, and Klein’s son Jeremy said a few words about his father before the Figure 8 began last Wednesday.

The Figure 8 and demo derby were some of Klein’s favorite events, and he was known for watering down the main arena before the event. Klein also would use his talent as a painter to help prep for the fair, painting roofs and whatever else needed to be done.

“He was a very energetic (person), and he always had a smile or a laugh with him,” Schrader said. “He will be missed. He’s been missed already, but we’ll think of him a lot of times because he was always ready to do something, and that’s what it takes to make (the fair) work.”

On Sunday, Schrader also paid tribute to other past board members who died since the 2019 fair: Roger Taake, Lyle Wessel and Willard Wiggers.

For the next month, the board will take a small rest before planning for next year’s fair ramps up in September.

This upcoming year will be extra special, as it will mark the fair’s 75th anniversary. While Schrader said this year’s fair “is going to be a fair that’s hard to top,” he and the other board members are already kicking around ideas for next year’s anniversary.

“We’ll plan to make it memorable or a little special,” Schrader said.