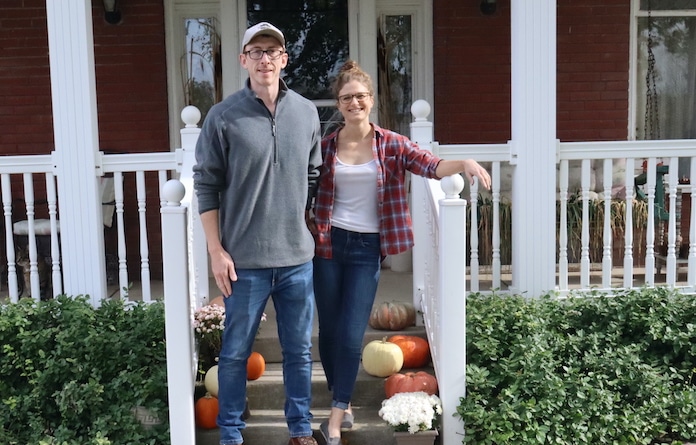 Just off Route 158 between Columbia and Millstadt, a small family farm has been the stage for a young couple as they fix up an old family house and find their place in the community.

Michelle Veit has settled down in the house her grandparents originally lived in, and she and her husband have since taken up the task of renovating it and turning the property into an ideal space for their many hobbies and interests.

Veit grew up on the property in the nearby house where her parents currently live.

After going to school for an art degree, she worked around practicing photography and doing a variety of refinishing and restoration work.

She eventually decided to take a class in Minnesota focusing on furniture restoration.

It was there she met her now-husband Will Sammons, which turned out to be a remarkable meeting as Sammons lived just about an hour away in New Melle, Mo.

“He was also taking the same course and it was just happenstance that he lives an hour away, so we met up there, came back down here, both families are down here, that was super convenient,” Veit said.

Sammons ended up joining her in the old Veit family house, and the two of them married on Oct. 1.

Though the surrounding fields are still largely managed by Veit’s father, their patch of land has become a hobby farm that’s changed and developed according to their whims.

Thanks to Sammons’ experience growing up on a small farm with a specialty for beekeeping, their most prominent produce is currently honey.

They said they started out with a few hives. That eventually grew to 10, and they now have a collection of about 50 hives scattered around, with some on the main property – though still a good walk away from the house – and others on neighboring plots of land.

Managing the hives has proven to be a lot of work, particularly for Sammons, who said he’s gotten a lot of help and advice from his mother – though they both spoke on how frequently the bees need to be checked in on.

“Fifty years ago, in the 70s before they had all the viruses and everything from overseas, you could put the bees out and then come once every couple months and collect the honey, and that’d be fine,” Veit said, “but now with viruses and mites and all sorts of stuff, you have to go out there a lot, every weekend maybe.”

Veit and Sammons have taken up a number of other hobbies while they’ve been together, including trying their hand at stained glass and using beeswax from the hives to make candles.

They’re also quite fond of animals, with two cats named Cai and Rigby as well as 17 hens and a rooster that they leave to wander around the lawn.

By far the couple’s biggest project, however, is fixing up the old Veit family house – work for which their shared restoration education has proven quite helpful.

The interior of the house is currently, as Sammons put it, a “side-by-side comparison” of old water damage and tearing wallpaper beside newly renovated and painted rooms that still emphasize the house’s old roots.

While it’s certainly become the hobby that takes up most of their free time, Veit said the restoration largely came from a place of necessity.

“I don’t know if that was when I came back home, I’m like ‘Yes, I’m gonna do this,’ but once I started living there, it was updated last in the 70s, so shag carpet, wood paneling, drop ceilings,” Veit said. “At some point you’re like, ‘OK, we need to change something.’ So I’m sure that was the long-term goal in the back of my head somewhere, but it’s something I hadn’t thought of, but then once we started it’s sort of hard to stop.”

While Veit finds herself quite busy between her full-time job supplying industrial finishes and hobby farming – and Sammons is similarly busy as a plant scientist for Spectrum Brands – she has still managed to accrue a respectable social media following on Instagram.

Her more farm-focused account @veitfarms that also chronicles the home restoration project currently stands at over 800 followers while their bee-centric account @brickhousebees has over 1,400.

Seeing those accounts grow has been quite rewarding for Veit, who added social media has also helped them network with many other folks who have been able to help them both with their farming and restoration.

They’ve also gotten help from neighboring farms and folks in Millstadt. They said the Millstadt Farmer’s Market – where they sell the honey they collect – has been plenty welcoming.

“It’s a big family up there, pretty much,” Veit said. “Everybody looks out for each other. Every Friday, not anymore because the farmer’s market is over, but every Friday you go and you sell stuff and you hang out with the other vendors. It’s a good time. Those are good people. So yeah, I think we have a little place in Millstadt, for sure.”

Their plans for the future are largely focused on the ongoing work in the house, but they also expressed aspirations for growing mushrooms, planting an orchard and setting up a website at some point in the future.

For the moment, they’re mostly happy to get the house where they want it while bouncing between whatever projects grab their interest.