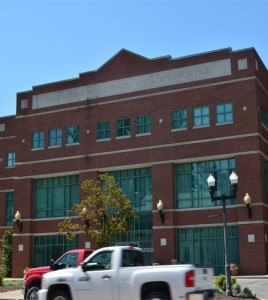 Same-sex marriage licenses become legal in Illinois after the law goes into effect June 1, but several counties in the state have already begun issuing them — including Monroe County’s neighbor, St. Clair County.

Illinois Attorney General Lisa Madigan said there was no reason to wait for the law to allow the unions, and counties such as Cook and Champaign have already issued licenses.

While Monroe County isn’t accepting applications or issuing licenses just yet, Monroe County Clerk Dennis Knobloch said his office has started taking steps to follow other counties in this movement.

“It’s a little frustrating because when they passed the law, they said it would take effect on June 1,” he said. “We don’t have a whole lot in place at this point.”

He said everything concerning marriage license forms is set up via computer programs, and portions of the forms will have to be reformatted before Monroe County can make the applications available.

“It’s going to take time,” he said. “We’re looking at what we would need to do to get this process up and running.”

Knobloch said he has told couples calling his office to check back at a later date.

Civil unions between same-sex couples have been legal in Illinois since the middle of 2011, but Knobloch said there haven’t been many of those in Monroe County since then.

During the first year the new same-sex marriage law is in effect, anyone who had a civil union is allowed the opportunity to convert that status into one of these marriage certificates, Knobloch said.

“When the civil unions first started, we had some applications,” he said. “We probably had around eight to 10, and most of those were probably issued in the first couple months.”

Knobloch is expecting another small wave of people asking questions and wanting to know the status of the applications.

“For the most part, this isn’t going to be a major change in the way things are done here at the office, but we do need to revise our computer programs,” he said. “It’ll be probably three or four weeks until we can make a decision about starting the process.”