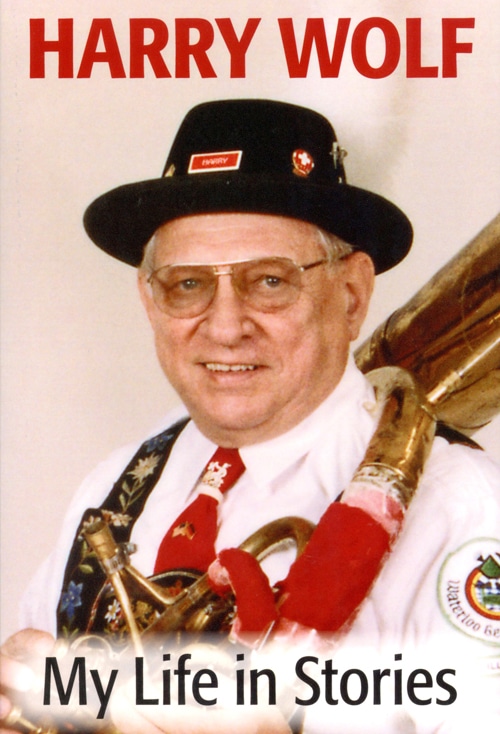 Harry Wolf is known today for the 73 years — and counting — he’s been entertaining around the country and across the ocean in the Waterloo German Band.

Thanks to “My Life in Stories,” an autobiography Wolf wrote, he will soon be known for so much more.

“I wrote the whole thing by longhand and gave it to (longtime friend) Barbara (Johnson), who typed it. It took three years,” Wolf said.

He then gave the manuscript to former Waterloo resident Dan Franklin, who assembled and edited the tome. Next, Wolf paid $18,000 to have 500 copies of the book printed, with 100 percent of the proceeds to be donated.

“All that money is to go to Camp Wartburg for a building fund,” Wolf said.

Add “tireless philanthropist” to Wolf’s repertoire. He’s also a retired junior high school teacher of 35 years. He’s a world traveler; he’s been to every country in South America, the Pacific Ocean’s Ring of Fire, Germany more times than he can keep track of, the Arctic Circle — twice — and even more exotic locales.

And he’s a published author.

After suffering a fall last  year and being out of commission, Wolf is finally nearing the end of his recovery with hopes to return home within the next few weeks. And he’s already looking forward to the Waterloo German Band’s summer gigs while remembering some of the past performances that stand out.

They’ve probably performed  in hundreds of parades (16 in one year alone in Chicago), in their iconic Waterloo German Band float that Wolf built himself after deciding he wanted to learn how to weld. Many Monroe County residents have memories of cruising down the highway in the county, or St. Louis, or even farther away, only to be passed by Wolf pulling the green-and-red float styled after a Bavarian chalet.

One Saturday, after a gig fell through, the band was driving home and saw a big red Budweiser sign. Naturally, they stopped and asked if they could play. The sign was at the Bavarian Inn in St. Louis and the chance encounter led to a standing Saturday night job that lasted 18 years.

“We always packed the place,” Wolf recalled. “And we never had a fight start.”

Wolf attributes this to the music the band plays — fun and upbeat.

“And usually I have a pretty dumb joke in there,” Wolf said.

Wolf and the Waterloo German Band performed at the White House during the Reagan administration, playing on  the South Lawn. And while the Reagans weren’t in residence — they were in Simi Valley, Calif., for their daughter’s wedding — a Secret Service agent who hailed from Waterloo spied Wolf and asked if his entourage would like a Congressional tour of the White House.

“Fourteen of us were able to take the tour, but we were not allowed to step foot into the Oval Office,” he said.

And then there’s the Santa Float, which the Waterloo German Band operated for about 20 years before retiring it in 2016.

“You can have all the money in the world, but nothing makes you happier than putting a smile on the face of a child,” Wolf said.

It’s not possible to reflect all that Wolf included in “My Life in Stories.” More than 500 pages share Wolf’s penchant for storytelling, prolific photography and vice-like memory for details. He can recall the names of men who distributed linens to young recruits when he was in Marine Corps training. He plays all his music without sheet music and can sing the German tunes in their original language.

He met and married fellow Marine Charlotte Bearce, and had sons Russell and Renard. Russell is an insurance agent with Country Companies. Renard, after a brief period as an Air Force fighter pilot, is employed by Boeing.

In 2015, his photo was added to the Waterloo High School Legacy Wall; and in 2017, Stubborn German Brewing Co. in Waterloo named its outside seating area the Harry Wolf Biergarten.

“I’ve really, really enjoyed my life and I’m not through yet. I’m ready to go,” Wolf said.

Copies of the book may be purchased for $20 at the Republic-Times newspaper office (205 W. Mill Street) or Stubborn German Brewing (119 S. Main Street) in downtown Waterloo.