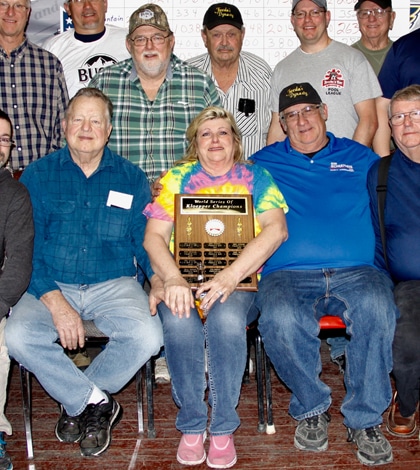 Don Schrader of Waterloo left Oak Hill one Saturday morning in December after what seemed like an encouraging visit with his longtime friend, Eugene “Matze” Matzenbacher.

Matze, who passed away in December at the age of 81, was recovering in the facility from a recent surgery at the time, and Schrader assumed from his neighbor’s cheerful spirit that he would be seeing him again in a few days.

As fate would have it, that would be Don’s last encounter with the Waterloo farmer and longtime Kloepper commissioner.

“Naturally, I assumed he was coming home on Tuesday. I’m pretty sure that’s what he thought, too,” Don said. “He did go home, but it was a different home than he anticipated.”

Two months passed and as Kloepper players across Monroe County continued on with their crazy card-playing ways in Matze’s honor, they lost another local treasure. Freeda Whelan of Prairie du Rocher passed away earlier this month at the age of 77 from an extended illness.

Whelan, who had owned Freeda’s Bar in Renault since 2004, and Matze left their mark on the Kloepper community. Players felt their absence during last Tuesday’s 41st annual World Series of Kloepper tournament at Fountain Inn in Valmeyer.

Kloepper is a German-influenced card game played almost exclusively in Monroe County, in which black queens, all jacks and all diamonds are always trump.

Karen Schrader wrote about Matze’s involvement in Kloepper, remembering how the commissioner would offer words of encouragement to players and remind them of the rules.

Don stepped in to fill the role of commissioner this year and offered a moment of silence for those lost.

“When the 41st World Championship Kloepper Tournament was held this past week at Fountain Inn, Matze was on our minds,” Karen wrote.

Remembering Freeda
Additionally, an emotional Freeda’s Bar Kloepper team was able to take home the World Series of Kloepper trophy for the eighth time in the past 10 years.

“I don’t think anybody on the team said, ‘Let’s win it for Freeda,’ but I think everybody was thinking that,” said Ken Schultheis, a longtime member of the Freeda’s Bar Kloepper team.

Deb Davitz, Whelan’s daughter, was clutching the trophy with tears streaming down her cheeks as the team posed for a celebratory photo. Davitz described her mother as a “wonderful woman.”

“I’m honored and believe my mother deserves to be recognized,” Davitz expressed when asked if she had any words to share about Whelan. “She was a wonderful woman who helped many people.”

Davitz is one of several players who have been a part of the Freeda’s Bar team over the years. In 2012, she tied with one other player for the honor of Kloepper Queen, and was the sole queen in 2014. The title is given to the top female scorer.

This year’s Queen and King of Kloepper were Queen was Donna Holcomb and Allen Kern from The Acorns team.

Russ Thomas of Waterloo has also been an integral part of the Freeda’s team, having been with the group for seven years. Thomas remembers Whelan as being kind to everyone.

“Freeda was a wonderful person. She treated everyone very well,” he recalled. “She loved her Kloepper team.”

Schultheis agreed, saying the team was well taken care of.

“Every Thursday night during Kloepper season, Freeda would make us something to eat. She was pretty famous for her chicken and dumplings,” he said.

Asked about the team’s success over the years, Schultheis offered jokingly that Whelan’s cooking was responsible.

“The reason I think we win is we play for ourselves,” he expounded. “We never have subs.”

Thomas noted the question comes up a lot in conversation.

“It’s just one night of cards. There’s a lot of luck involved,” he explained.

Regardless of the reason for their victories, Whelan would be there to hold up the trophy every year with pride, according to Schultheis.

“That meant everything to her to get that trophy. We have a very good team,” he said. “It was very special to her. When she would get the trophy, there would already be a spot ready for it on the wall.”

Remembering Matze
Schultheis runs the Kloepper club in Renault and has played the game for many years, including in the Maeystown league. He couldn’t trace Matze’s time as commissioner back to the beginning but said it had been as long as he could remember.

“I always liked Eugene. He came off as a very dry person, but he was not,” Schultheis said. “He was all jokes and laughs and everything.”

Don Schrader, who lives down the road from Matze’s farm, told the Republic-Times he was the commissioner since at least the 1980s, if not for longer. Don had cultivated a deep personal relationship with Matze over the years.

“As far as what I could say, he was just a dear friend … He enjoyed good fellowship and having good time with friends,” Don said.

Karen described him as a “kind-hearted” man who was always “looking out for others.”

“He made things fun and he enjoyed people,” she said.

The Schraders now farm some of Matze’s land and came into possession of his Kloepper briefcase shortly before his passing.

“He stopped by in early December 2017 with the Kloepper briefcase and said to my husband, Don, and me, ‘I want you to take over while I’m in the hospital and, if I don’t make it, I want you to keep it going – our Kloepper club and the tournament.’” Karen wrote.

Later, Karen remembered thinking she had to reassure Matze that he would pull through his illness.

Babe Matzenbacher, Matze’s wife of nearly 59 years, told of how he was ready for his suffering to end in his remaining days as he battled Lymphoma.

“It gives you chills to think about,” Babe said when considering how Matze knew it was his time.

At the funeral, Babe estimated seeing close to 1,000 people. She said cars were even parked along Maeystown Road for the service at Holy Cross Lutheran Church in Wartburg, where Matze was a member.

“It was amazing how many of them said, ‘Wow, I’m going to miss that man,” she boasted. “There was one man who went and laid on the casket and cried and cried. And I went up to him and said, ‘It’s going to be OK.’

“He said, ‘You don’t understand. He taught me how to butcher.’

She added, “There’s no one like Eugene I’ve ever met in my lifetime … He was a very special person. Everybody loved him. He was always there to teach or show younger guys how to do something.”