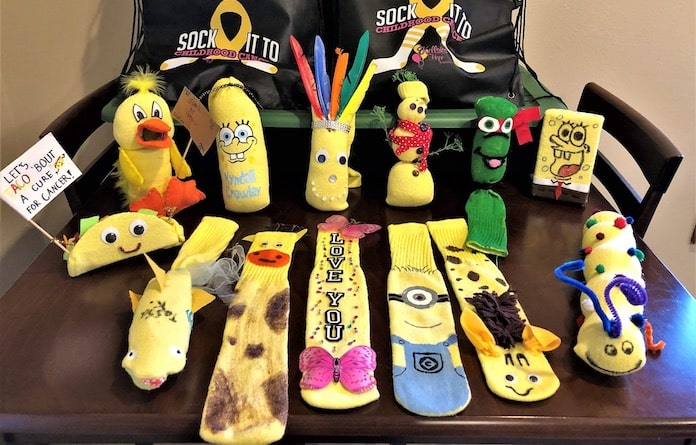 This year, Rogers Elementary, Gardner Elementary and Ss. Peter & Paul Catholic School raised the most money they ever have through the Kellsie’s Hope Foundation’s Sock it to Childhood Cancer campaign.

Waterloo Junior High School also contributed to this total by raising $400 with an ice cream social.

“Between the four schools that do it, we collected over $14,000 and the majority of that is in change. That’s amazing,” said Tricia McGhee, who oversees the campaign locally.

Students at the four Waterloo schools filled socks with change, with all change collected going to Kellsie’s Hope Foundation, which donates money to support childhood cancer research, takes children with cancer on fun trips and outings, provides an annual nursing scholarship and more.

“We, as volunteers, get thousands of white socks and we dye them yellow because yellow is the childhood cancer color, and then we deliver them to the schools,” McGhee explained. “(Teachers) pass socks out to each classroom, and the kids collect as much change as they can.”

But what would a fundraiser be without a little competition? At each school, classes that collect the most change win a pizza party. This year’s winners are Gardner’s Marci Cooper’s class ($491.93), Rogers’s Kristin McCarthy’s class ($573.25) and SPPCS’ Anna Seipp’s class ($531.48).

The elementary classes also competed in a sock decorating contest, where designs have ranged from snakes to pineapples to even Big Bird. Winners got goodie bags.

In general, each school’s total increases year after year. Since all four schools, including WJHS’ ice cream social, started raising money for Kellsie’s Hope through the campaign six years ago, they have raised $52,921,85.

“We are one little community helping in a big way,” McGhee exclaimed, adding, “Every penny really does count!”

She is not sure the kids really understand what a large impact they are making.

“It leaves me speechless, it really does,” McGhee said. “It’s kids helping kids and I don’t know if they realize what they’re doing when they’re collecting change and what a blessing they are to kids battling cancer and their families. It brings tears to my eyes.”

The foundation helps children with cancer in three main ways, McGhee explained. It all started with the foundation’s namesake, Kellsie Marchbanks, a special young woman who battled cancer three times before she lost her final battle in 2011.

“Kellsie actually started this foundation from her hospital bed, because when she was stuck in the hospital with all the other kids on holidays, she used to make little gifts herself and she would go (to deliver them) in her wheelchair,” McGhee said.

After Kellsie’s death, her parents organized the foundation and kept up her tradition of spreading holiday cheer.

“They do so much in the community as far as children’s hospitals,” McGhee said. “They take little gifts there on holidays and we’re getting ready to do Trees of Hope; they make up itty-bitty trees that are decorated that they take to the hospitals and the itty-bitty trees will have like little stuffed animals and gift cards for the kids.”

McGhee also highlighted the foundation’s fundraisers for childhood cancer research, as well as their commitment to wish gifts and trips.

For McGhee’s family, Kellsie’s Hope holds a special place in their heart for other reasons, too. McGhee went to school with Kellsie’s parents, and her nephew battled (and conquered) childhood cancer at the same time Kellsie did.

“That’s why it’s near and dear to our hearts,” McGhee said. “When Kellsie passed away, we all just kind of pitched in to do what we can because it’s a 100 percent volunteer foundation.”

For McGhee’s daughter Jennifer McBride, this meant bringing the Sock it to Childhood Cancer contest to Waterloo in 2015.

“Gardner was the first school that did it, because she was a teacher at Gardner … they actually do schools all over the United States,” McGhee said.

By 2016, all four Waterloo schools were participating. Eventually, McBride moved to Florida, where she introduced Sock it to Childhood Cancer to her new school. At this time, McGhee took over in Waterloo.

She said the campaign is a complete community effort that extends beyond the kids collecting coins.

“They’re amazing. Everybody who is involved with this from the teachers that helped pass out the socks to the office workers that (help) when the socks are collected. Papa John’s gives us a really good deal on the pizza parties and Scott Credit Union has been phenomenal,” she said, explaining SCU counts thousands of dollars worth of change at a time for the foundation.